Premier League: Determined to stay and fight for his place in Pep Guardiola's Manchester City side, says Phil Foden

London: Phil Foden is determined to stay and fight for his place at Manchester City even though he has seen other young players leave the Premier League champions in search of better opportunities elsewhere. 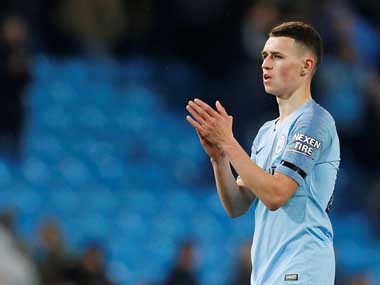 Sancho, 18, has impressed at Borussia Dortmund since joining the Bundesliga club in 2017, earning three England caps.

"Everyone is different, and I see myself playing here. It's up to them, really. It shows the strength of the squad we have here, how good the players are. It is difficult to get in, but we all try our best," said the midfielder after making his sixth start of the season, and scoring, in Sunday's 7-0 hammering of Rotherham in the FA Cup third round.

"I just need to keep pushing, do my best in the games and take opportunities when they come. We've got the best set of players and the best staff so I'm in the right position. I'm learning off them every day, so I couldn't be in a better place," he added.

Foden has been on the fringes of first-team action this season and has made 16 appearances but his chances to start have largely been limited to domestic cup matches.

That has led to speculation he could be loaned out to gain experience but such a move was emphatically ruled out by Guardiola after the Rotherham game, with the manager saying it was "impossible".