Chelsea will only allow striker Olivier Giroud to leave in the January transfer window if they can sign the right replacement for the Frenchman, assistant coach Jody Morris said on Friday. 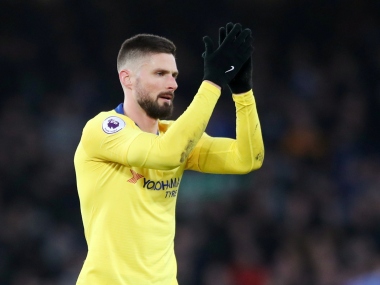 Giroud, who joined Chelsea from Arsenal in January 2018, has fallen below the club’s top-scorer Tammy Abraham in the pecking order and the British media has linked him with a switch away from Stamford Bridge.

The 33-year-old has not scored in five league appearances this season.

“Well, he still plays for Chelsea. It’s got to be for the benefit of the club,” Morris told a news conference before Sunday’s FA Cup third-round clash with Nottingham Forest.

“We can’t let people walk out the door if that means we’re left short somewhere. Yes, you have to look at the individual as well, but I’ve got to say Giroud’s been nothing but a class act and a top professional since he’s been here.

“So I don’t envisage any issues from him on that front... I’m not privy to discussions as the manager is but any movements will be... to improve the squad.”

Chelsea have been cleared to sign players in January after the Court of Arbitration for Sport last month halved a transfer ban imposed on the club.

Midfielder Danny Drinkwater will return to Chelsea at the end of his loan spell at Burnley this month, Burnley manager Sean Dyche said on Friday.