Chelsea boss Antonio Conte says anything can happen in the race to finish in the top four after his side moved within two points of the Champions League qualification places with a win at Swansea City in the Premier League on Saturday. 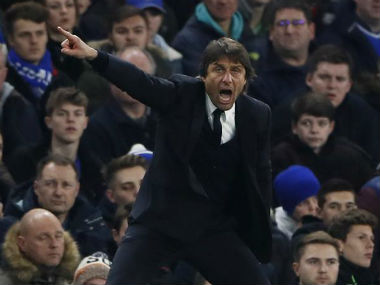 Cesc Fabregas scored after four minutes at the Liberty Stadium to help his side record a 1-0 win over a Swansea team who are fighting to retain their top-flight status.

Chelsea have won their last three league matches and are now just two points behind fourth-placed Tottenham Hotspur who play Watford on Monday.

With a huge game against Liverpool at Stamford Bridge next Sunday, Conte says his team are ready to put even more pressure on the teams above them.

“The only way that we have to put a bit of pressure on the top four is to win.” Conte told BBC Sport. “Today has been very positive to put that pressure on Tottenham. Football is not simple and anything can happen.

“We started the game very well and dominated the game in the first half. But you must be very good to kill the game and you have to take the chances otherwise you risk your opponent trying to push.

“We were very good defensively and it’s important for us to take three points with a good win. Now we have three games to go and have to win for our fans, for our work and then we’ll see what happens.”

Swansea manager Carlos Carvalhal is convinced his side have enough quality to beat the drop even though they are now just one point above the bottom three following their first home defeat in the league since January.

“We did a very good performance and I’m happy with my players and the fans. We tried to move the ball quicker in the second half,” Carvalhal said.

“We were frustrated with the score but are happy with the attitude of the players. We must continue this momentum of the performance in the last three games.

“If we play with this heart and commitment we will get the points to stay in the Premier League...

“When I arrived we were five points off at the bottom but we’ve progressed and fight to stay in the division. We must believe in ourselves because if we do, we don’t need to worry about the other teams.”