Past Masters of Indian Badminton: Ami Ghia, the wonder woman who punched above her weight

Editor's Note: Owing to the Coronavirus outbreak, all sporting action across the globe stand suspended or cancelled. The crisis, however, presents us with an opportunity to step back, rethink, and write on sports differently. In line with this thought, we are starting a series of profiles on India's illustrious badminton stars. The articles, penned by Shirish Nadkarni, promise to take you on a nostalgia trip while touching upon the lesser-known facets from the lives of the past masters.

“The harder you hit the shuttle at her, the faster it comes back.” This classic comment was made (through an interpreter) by a bewildered 1981 All-England women’s singles champion, Sun Ai Hwang of South Korea, after having been charmed into submission by a tiny wisp of a girl at the Indian Open in New Delhi in 1985.

It was the second time that the Korean was tasting defeat at the hands of arguably one of India’s three greatest female shuttlers, Ami Ghia. Ami Ghia made up for her lack of strength with superior shuttle control. Image courtesy: Shirish Nadkarni

The first time was at a much more important forum – the 1983 World Championships in Copenhagen, when the Indian had made a fabulous recovery after the loss of the first game, to beat Hwang 6-11, 11-5, 11-8, in a genuine David vs Goliath battle.

That was the year when the Bombay girl broke into the top ten at global level. In July 1983, she occupied the seventh berth in a list topped by such illustrious shuttlers of her time as the legendary Chinese duo of Zhang Ai Ling and Li Lingwei, Indonesia’s Lie Ing Hoa Ivana and Verawaty Wiharjo, England’s Helen Troke and Denmark’s Kirsten Larsen.

That seventh spot could have been improved to sixth, had Ami managed to win one all-important point from another Korean, Kim Yun Ja (subsequently mother of current top Korean shuttler, Sung Ji Hyun), at the Malaysian Open, later the same year. Having beaten the likes of China’s Huang Ping and Japan’s Yoshiko Yonekura, the Indian was in sparkling form with her immaculate control.

The Korean, though, won despite being repeatedly sent the wrong way by Ami, in much the same manner as the pint-sized Indian used to treat the gangling Danish six-footer, Larsen, who had earlier claimed the World No 1 spot. 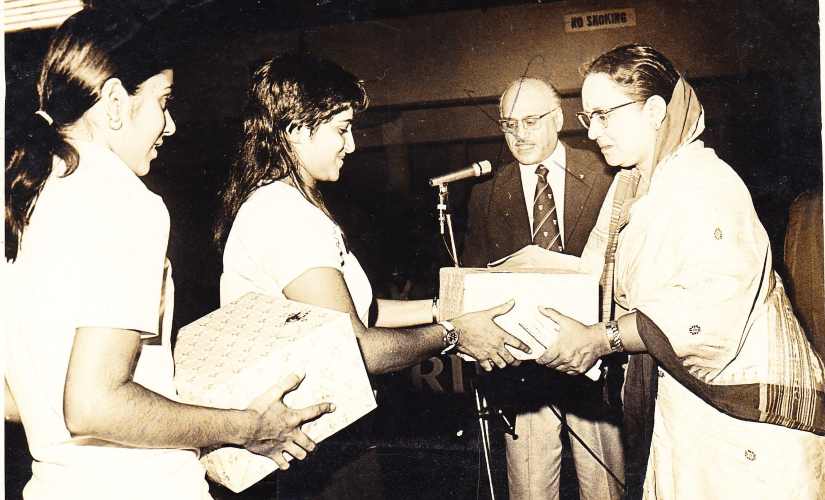 No other Indian woman before Ami had been ranked among the top ten in the world. The Mumbai girl also had the distinction of being the first Indian woman player to be selected to participate in the 1982 and 1983 World Cups, which at the time were by invitation only to the world’s top dozen players.

How did Ami, who won the Indian national women’s singles title seven times, and lost three other finals, manage to reach where no Indian woman had gone before? She did it despite lacking the physical strength and stamina that most of the top women of her heyday had, or the quicksilver movements that the top half-dozen Chinese women demonstrated on the court as their greatest asset.

Ami’s own trademark traits were her fabulous courtcraft, shuttle control, and line judgment, all of which offset her relative lack of speed on the court. Whenever she played doubles, and was stationed at the net, she would call out a soft “No” to her partner without looking back, if she felt a shuttle looked like going long or wide. And she was virtually never wrong! A badminton reporter once referred to her as the female Natekar. And how right that journalist was!

As Hwang so correctly put it, Ami used her opponent’s most powerful shots against the hitter, placing the return of smash at such awkward angles on the court that the rival was caught napping. Nor was there much strength in the frail frame, but that wrist contained just the right quantum of “whip” to be able to send the bird exactly where she wanted to. 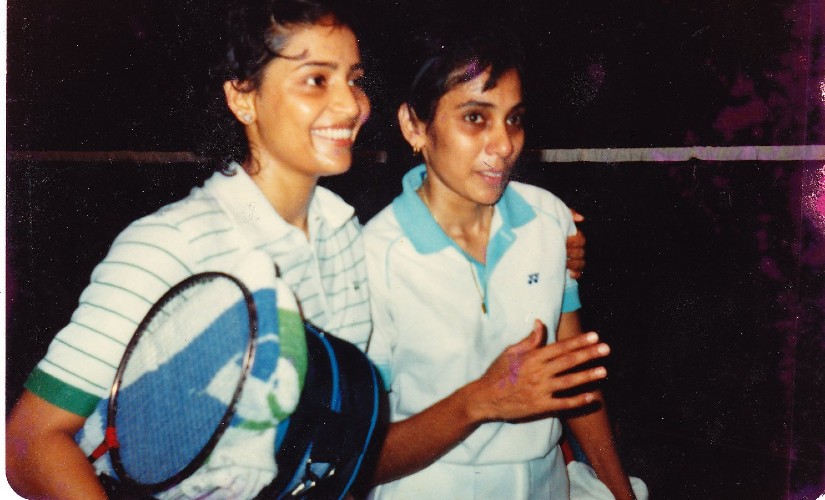 Like Prakash Padukone, she never possessed a powerful smash, but her half-smashes would be accurately placed along the lines or into the rival’s body. Her movements were graceful and economical; one rarely saw her take an unnecessary step. And her drops from the backcourt were simply breathtaking.

A perfect service, both the deep, high one in singles, and the net-hugging one in doubles, gave Ami the opportunity of launching a rally in exactly the right way. Her brilliant control of the shuttle at the net on both the dribble and the cross-court wristy flick, also made her a classy doubles player – as her 12 women’s doubles and four mixed doubles, among her 23 national titles, will readily testify. Yes, 23, which is an Indian record for male or female shuttler, and is actually buttressed by 13 runner-up positions. This record of making it to 36 National finals, including 15 singles finals, during a 17-year career showed Ami's versatility, and is a mark unlikely to be ever equalled, let alone beaten.

My personal first memory of the 1956-born Ami Ghia was when I played badminton at the Khar Gymkhana in the late-1960s. Two diminutive schoolgirls, sporting pigtails and wide smiles, played such exquisite doubles together that they troubled even the top men’s players of the gymkhana at the time.

Ami and Sujata Jain (who was to subsequently marry Uday Pawar) also honed their singles skills against each other. Sujata was physically the stronger of the two; Ami the wilier. Sujata had power and speed, but was hampered by a defective grip on the racket, that restricted her backhand. Ami had no obvious shortcomings, except for lack of power, due to her slight frame.

By 1970, the two players, recently into their teens, were competing at national level for not just the junior girls’ crowns, but also making serious inroads into the women’s ranks. The likes of Shobha Moorthy, Rafia Latif, Damayanti Tambe, et al started feeling the heat from the two talented young Bombay girls, and wilted before their onslaught.

No selector in his right mind could have kept Ami and Sujata out of the national team for the Uber Cup. And, for the next decade and a half, Ami was India’s flag-bearer in all women’s badminton events, individual and team; and became India’s youngest Uber Cup captain in 1977 at the age of 21.

At the international level, Ami really first made waves at the 1978 Commonwealth Games in Edmonton, Canada, when she reached the singles semi-finals, and eventually picked up the bronze medal. Three years later, at the pre-Commonwealth Mini Games, held in Brisbane, Ami won the gold, beating Karen Phillips of New Zealand and Wendy Carter of Canada, no mean players.

1981 was the year Ami bagged the triple crown – a sweep of singles, doubles and mixed titles – at the Vijayawada Nationals. Later that year, Indian spectators who witnessed the first Indian Masters at Pune were thrilled to see their fellow-countrywoman reach the final. Sadly, though, Ami could not match the speed and power of China’s Zheng Yuli and capitulated a trifle meekly in the title round.

Even into the mid-1980s, Ami continued to dominate at the national level, reaching several more singles finals, but finding Kanwal Thakar Singh’s speed and strength a bit too much to cope with, and losing two national finals – in 1977 and ’78 – to her Chandigarh adversary, who was her women’s doubles partner in the latter National; and, to this day, remains one of her closest friends.

Ami was also beaten in the 1981 national final by the then up-and-coming Madhumita Goswami. But, as her one-time mixed doubles partner, Leroy D’Sa, pointed out, “Ami was loyal enough to the Maharashtra state team to play in all the matches in the Inter-State, and was squeezed out by the time she reached the individual National singles final, whereas Madhu kept herself fresh for the individual events.”

And then, following her marriage to chartered accountant Sunil Shah, Ami quietly faded from the national scene, and graduated to motherhood.

If one tried to enumerate all of Ami’s achievements and the titles she has won in a glittering career, the space allotted for this piece would prove grossly insufficient. Suffice it to say that her accolades include the Shiv Chhatrapati Award from Maharashtra state (1973), the Arjuna Award (1976), the Badminton Association of India’s Sportswoman of the Year Award (1977) and the Maharashtra state government’s Gaurav Puraskar (1990). Many badminton aficionados honestly felt she richly deserved a Padma Shri.

Wine, they say, improves with age – and so it was with Ami. Having failed to reach the absolute peak at international level during her salad days, she showed how fit she had kept herself after the end of her tournament days, when she returned to the courts as a veteran, and bagged the singles gold medal in the 35+ category in two quadrennial World Masters Games (WMG), considered the Veterans’ Olympics – at Brisbane (1994) and Portland (1998).

Her victim in the singles final in Brisbane was China’s Xu Rong, who that day could do no right against Ami! Xu’s speed during her salad days had proved quite a handful for Ami to handle. But, with those lightning-fast reflexes no longer around to assist her, the Chinese woman was no match for Ami. The same thing happened at Portland four years later, when Ami thrashed another Chinese, Chan Sun-yuk, at 11-8, 11-0, for her second WMG singles gold medal.

Back home, the durable Ami bagged the national veterans’ mixed doubles title thrice in a row, in partnership with fellow-Railwayman Iqbal Maindargi, in the years between 1996 and ’98. And then, for perhaps the first time in her life, the 42-year-old Ami Ghia-Shah fell prey to a serious injury.

A persistently troublesome elbow made her put her raquet into mothballs for three long years, and it was with considerable trepidation that she picked it up again for the mixed doubles event at the 2001 GD Birla Memorial Veterans’ Championships at the Bombay Gymkhana in Mumbai.

In a manner typical of the shy, retiring woman that she is, Ami expressed grave uncertainty as to whether she would be able to acquit herself with credit in the tournament. But the answer to that was simple. Once she took the court, those inimitable strokes started flowing smoothly in the manner of yore. She was effortlessly able to renew her mixed doubles partnership with her former India team-mate, Pradeep Gandhe, with whom she had won three of her four mixed doubles national crowns between 1982 and ’85.

Sadly, Ami put her raquet away for good shortly thereafter, preferring to expend her energies on her two sons. But now that the boys have settled down to lead their own professional lives, and Ami has more time on her hands than she knows what to do with, we could soon see that slight, pencil-slim figure, with greying hair the only sign of her 63 years, softly call out “No!” to her partner if she feels that the shuttle could sail either long or wide. As always, impeccably judged.