India capped off a successful Paralympic Games campaign in Rio de Janeiro by procuring their best ever haul of four medals, including two golds and a silver and bronze medal apiece. 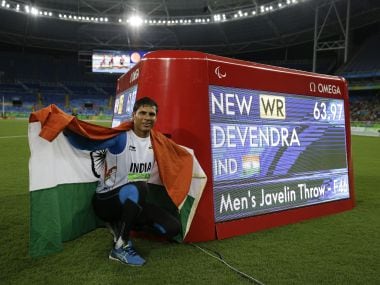 Devendra Jhajharia won a gold medal and improved on his own world record timing. AP

Ever since the names of the 19 Indian athletes to represent the country at the Paralympic Games were revealed, it was always believed the country would have a chance of improving upon its medal tally. The largest ever contingent in the country's Paralympic history was expected to do well, and it did.

Varun Singh Bhati, who jumped a personal best of 1.86 metres to clinch bronze in the men's high jump T-42 event, faced a lot of hardships before achieving the historic feat. The 21-year-old, who trains at the Sports Authority of India (SAI) centre in Bengaluru, is suffering from a T-42 disability. This is a disability classification in the sport for differently-abled track-and-field athletes with single "above the knee" amputations or a comparable disability.

With Thangavelu and Bhati securing their podium finishes, hope arose of India doing better than ever before at the Paralympics. A historic silver medal ensured Deepa Malik scripted history; she won second place in the women's shotput F53 event at the Rio Paralympics on Monday, with a personal best throw of 4.61m.

With this herculean effort, she became India's first woman and the oldest athlete ever to win a medal at the Paralympics.

Deepa started off with a throw of 4.26m, then registered 4.49m on her second attempt and 4.41m on the third. On her sixth throw, she recorded a personal best of of 4.61m, which ultimately helped her finish second.

Then came Devendra Jhajhariya, India's sole gold medalist at the Paralympics prior to 2016. Jhajhariya went on to break his own world record and made the javelin gold medal his own. "If you have the willpower then nothing is impossible in this world. I won my first paralympics medal in 2004, and now, after 12 years, it is just the dedication and hardwork which paid off," Jhajhariya, who is a coach with the Gandhinagar centre of the Sports Authority of India (SAI), told IANS from Rio after his victory on Wednesday.