The unseeded Indo-Czech pair played tremendously to win 7-6(1) 6-2 in the summit clash, which lasted one hour and 24 minutes. 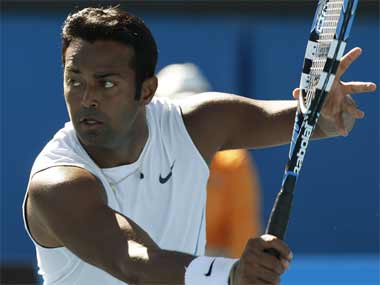 Paes had reached the Australian open final thrice, but lost on all ocassions -- twice to the Bryan brothers. This title has eluded Paes since the late 90s when he along with estranged partner Mahesh Bhupathi dominated the doubles tennis and reached the number one spot as a team in 1999. In their quest to complete their slam tally, Paes and Bhupathi had joined hands in 2011 after a gap 11 years but the title slipped out of their hands as they lost to Bryan brothers.

Paes and Bhupathi broke partnership again with the latter choosing Rohan Bopanna as partner on Tour for the 2012 season. Paes began the season by winning the Chennai Open with Serbian Janko Tipsarevic. This is the 13th Grand Slam title for Paes with seven men's doubles trophies and six mixed doubles titles and is India's most succesful doubles player in majors. Bhupathi has won 11 Grand Slam titles. Paes won French Open thrice (1999, 2001, 2009) and Wimbledon (1999) and US Open (2006) once each.

Paes now has a chance to repeat the rare success of winning both men's doubles and mixed doubles titles in the same Grand Slam tournament as he is due to play the mixed doubles final tomorrow with Russian partner Elena Vesnina.