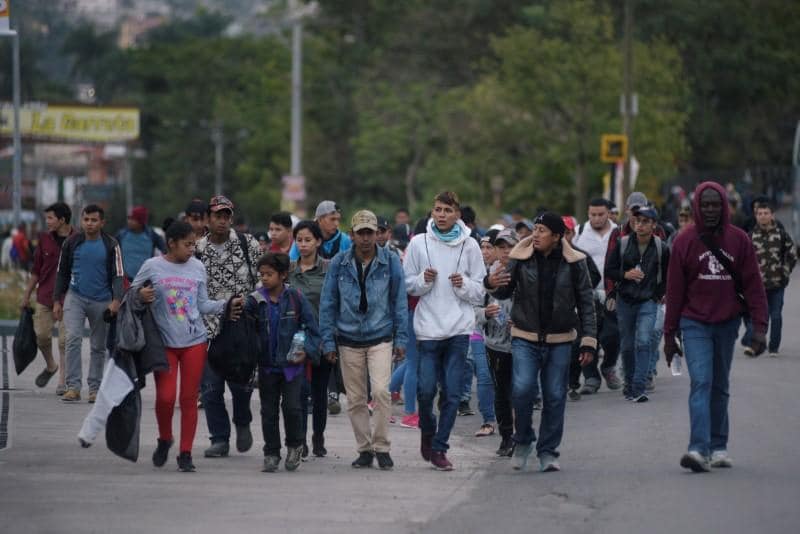 Mexico's government is bracing for the arrival of hundreds of Central Americans on its southern border in coming days, an event likely to be closely monitored by the U.S. government, which has made curbing illegal immigration a priority.

Arriving in Guatemala chiefly via crossings on its northern border with Honduras, around 1,350 migrants had been registered entering legally by late morning, said Alejandra Mena, a spokeswoman for Guatemala's National Migration Institute.

U.S. President Donald Trump has put Mexico and Central American nations under pressure to accept a series of migration agreements that aim to shift the burden of dealing with asylum-seekers on to them, and away from the United States.

The bulk of migrants caught on the U.S. border with Mexico depart from Honduras, Guatemala and El Salvador seeking to escape chronic poverty or gang violence.

Unlike Guatemala, Mexico has refused to become a so-called safe third country obliging it to accept asylum claims from migrants that set foot on its soil. Still, Trump has threatened trade sanctions if it does not contain the flow of people.

Guatemala's new president, Alejandro Giammattei, said on Wednesday that Mexico's Foreign Minister Marcelo Ebrard had told him Mexico would not allow the new caravan to pass.

Mexico's foreign ministry has not responded directly to that assertion. However, Interior Minister Olga Sanchez said the border would be policed and that the Mexican government would not be issuing any visas of safe conduct to the migrants.

According to communications shared by some of the migrants on messaging service WhatsApp, some of the Hondurans said that they planned to meet in the town of Santa Elena in northern Guatemala and head for the Mexican border on Saturday.

Under a freedom of movement accord between northern Central American countries, Giammattei said he would let the caravan enter Guatemala provided people had the necessary paperwork.

Some migrants were turned back at the Guatemalan border on Wednesday and Honduran police fired tear gas on others who tried to cross without going through migration checks.