Vadodara: Former secretary of the Indian Cricket Board, Jaywant Yeshwant Lele passed away at his residence here following a massive heart attack.

Lele breathed his last late last night. He was 75 and is survived by his wife, a son and a daughter.

The outspoken Lele, who served as BCCI's assistant secretary and later took over the reins as the secretary when Jagmohan Dalmiya became the president of the International Cricket Council in 1996, had celebrated his 75th birthday on September 13, said former India stumper Nayan Mongia, who confirmed the news of his death.

"He had celebrated his 75th birthday with his friends. It is very unfortunate. He was like a father to me. I always used to consult him on various issues. He had guided me from the age of 12," Mongia said. 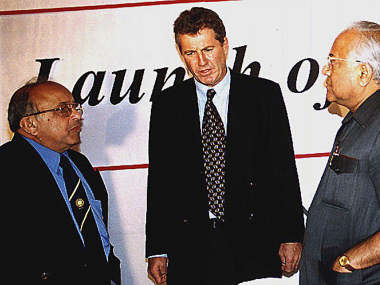 According to family sources, Lele, who had written an autobiography on his career as a cricket administrator, was not feeling well during his birthday celebrations because of a viral infection.

"He suffered a massive heart attack when he went to the bathroom before going to sleep. He was escorted to the bed but he passed away," said family sources.

It was during Lele's tenure as the BCCI secretary that the match-fixing scandal broke out in 2000, which led to the life ban imposed by the Board on former captain Mohammad Azharuddin and Ajay Sharma and five-year bans on Ajay Jadeja and Manoj Prabhakar.

A qualified umpire and a club level cricketer, Lele later graduated to BCCI ranks and then rose to become its secretary during one of the most turbulent period in Indian cricket.

It was during his tenure as the BCCI secretary that the Board first set up the Justice Chandrachud commission to enquire into match-fixing charges and then asked the CBI to probe the charges after former South African captain Hansie Cronje admitted to fixing matches, got banned for life. Cronje had named several cricketers around the world, including Azharuddin.

Lele often got into trouble for airing his views fearlessly. He had once also spoken out against legendary
all-rounder Kapil Dev, when he was the India team coach, for including Ajit Agarkar as an additional camp member in Ahmedabad without the Board's permission.

It was Lele who had predicted that India would suffer a 3-0 whitewash against Australia during their tour Down Under in 1999 with Sachin Tendulkar as captain and Kapil as coach. He, however, denied having predicted any scoreline later.

Lele started his career as an administrator of the Baroda Cricket Association, learnt his ropes under the guidance of former India skipper Vijay Hazare and then former BCCI president Fatehsinhrao Gaekwad before becoming its joint secretary.