Ouch! Golfer gets bitten by crocodile at Australian tourist resort

A golfer who was bitten on the leg by a crocodile while playing at an Australian tourist resort said Tuesday he was partly at fault for hitting his ball in the water and disturbing the aggressive reptile while it sunbaked.

John Lahiff, 75, had puncture wounds in his right calf after he was bitten by the 1.2-meter (4-foot) saltwater crocodile on Monday at the Palmer Sea Reef Golf Course in the tourist town of Port Douglas on Queensland state's Great Barrier Reef, police said.

Lahiff told Australian Broadcasting Corp. from his Cairns Hospital bed that he had seen crocs on the course before and should have been more wary of them. 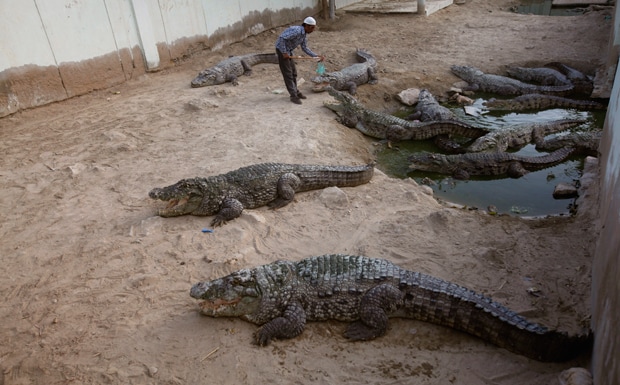 He was attacked after retrieving a ball from a water trap on the 11th hole.

"I drove a cart around there to retrieve the ball and I didn't see the croc sunbaking just on the edge of the water," Lahiff said.

"I'll just stay away from them, that's all. Just don't hit balls in the water," he said. "It's partly my fault for disturbing it — it was just sunbaking."

The croc quickly retreated into the water.

Lahiff drove his cart back to the club house where paramedics were called. They told him he was lucky no artery had been severed.

Lahiff said he played the course three times a week and would return there soon.

The Department of Environment and Heritage Protection will attempt to catch the crocodile, which is a protected species under Australian law, so it can be relocated to a zoo or crocodile farm where crocs are grown for their meat and hides.

Crocs are a common sight on golf courses in Australia's tropics and signs warn golfers of the dangers.

The department told the ABC it was unusual behavior for a small crocodile to interact with people.

"Crocodile has been removed from all menus at Palmer properties following today's incident," Palmer joked in a tweet on Monday.

Crocodiles can grow up to 6 meters (20 feet) long and have become abundant across Australia's tropical north since they became protected in 1971.