From Otman Bakkal to Giorgio Chiellini: The three victims of vampire Suarez

Just when it seemed like things are back on track and Luis Suarez had become the most beautiful player to watch, he had to go and bite an opposing player. Again.

Suarez was the hero against England as he scored a brace to power Uruguay to a 2-1 victory. All eyes were naturally on the Liverpool hit-man in Uruguay's do-or-die match against Italy. 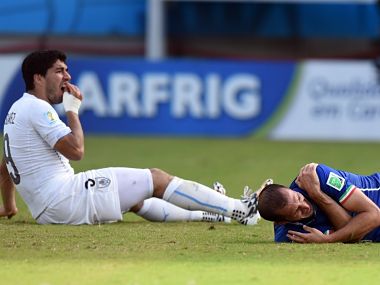 While his team managed to eke out a 1-0 win against an Italian side reduced to 10 men in the second half to qualify for the knock-outs, Suarez's moment of madness has overshadowed the celebrations.

The incident took place in the 78th minute. Suarez clashed with Italy defender Giorgio Chiellini and appears to bite him on the shoulder. The referee didn't see it but replays suggest Suarez chomped down Chiellini, who promptly pulled down his shirt to show what clearly look like bite marks.

Suarez, of course, has a history with biting, having down it twice before.

Suarez was banned for seven matches in 2010 while playing for Dutch club Ajax after TV replays showed him biting PSV Eindhoven midfielder Otman Bakkal in a league match.

The referee missed the incident and Suarez was not punished during the game but Bakkal pulled his shirt down afterward to show a red mark on his shoulder — a similar place to where Suarez appeared to bite Italy's Chiellini at the World Cup on Tuesday.

At the time, Suarez still had a suspended one-match ban hanging over him following a red card in that season's opening game. The incident earned him the nickname "Cannibal of Ajax" in the Netherlands.

Three years later in 2013, Suarez — now playing for Liverpool — was slapped with a 10-match ban in the English Premier League for biting the arm of Chelsea defender Branislav Ivanovic. It was one of the most severe punishments handed out by the league for an on-field offense and a disciplinary panel said a regular three-match suspension for violent conduct was "clearly insufficient."

Again, the referee missed the incident as Suarez bit Ivanovic on the upper arm during the 2-2 draw. However, it was seen by millions of viewers on TV replays and British Prime Minister David Cameron waded into the controversy by saying the Uruguayan had set an "appalling" example for young fans.

Suarez eventually released a statement saying "I acknowledge that my actions were not acceptable on the football pitch."

For the third time, Suarez was accused of biting an opponent when he appeared to dig his teeth into Chiellini's shoulder in Tuesday's World Cup group game in Brazil between Uruguay and Italy. For the third time, the referee failed to pick up the incident but TV replays may again be the downfall of Suarez.

Suarez was blocked off by Chiellini while going for the ball in the penalty area and then appeared to bury his mouth in the Italian's shoulder. Both players went down, with Suarez holding his mouth. Chiellini also pulled down his shirt to show an apparent mark on his left shoulder. About a minute later, Uruguay scored for a 1-0 win to eliminate Italy.

Chiellini said the referee not sending off Suarez was "ridiculous."

"It was absolutely clear," he said of the bite. "There's even a mark."