Los Angeles: Los Angeles city council rubber-stamped the host city contract on Friday, paving the way for bringing the 2028 Summer Olympics to southern California and ceding the 2024 Games to Paris.

The members voted 12-0 in favour of signing off on the memorandum of understanding and host city contract documents which would see the city host the Summer Games for the third time in history. 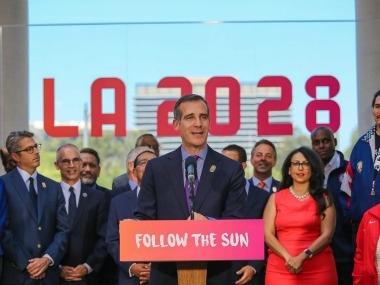 "This opportunity is too great and we cannot pass it up," said council member Herb Wesson.

"We will make the necessary adjustments to make this the most successful Olympics Games in the history of America."

The city council signed off on the Games despite not knowing the full financial reality of hosting the 2028 Olympics.

But Los Angeles' campaign was given a boost when Olympic leaders agreed to hand over a bigger portion of their broadcast and sponsorship revenue for allowing Paris to go first.

Los Angeles started off competing with other cities around the world for the 2024 Games, but eventually all bidders except for Los Angeles and Paris dropped out.

In July, the International Olympic Committee approved the idea of awarding both the 2024 and 2028 Games simultaneously.

The Los Angeles organizing committee proposed a modest budget — by Olympic standards — of $5.3 billion for 2024 by utilizing existing structures and not building any new permanent venues for the Olympics. The new budget for the 2028 Games is not expected to be ready for months.

Los Angeles sought concessions for waiting four years which includes the IOC advancing $180 million to the local organizing committee due to the longer planning period and funding towards developing youth sports.

The IOC also agreed to waive $50 million in fees, contribute up to $2 billion of its broadcast and sponsorship revenues to the Games, and channel any of its profits from the Olympics back to Los Angeles.