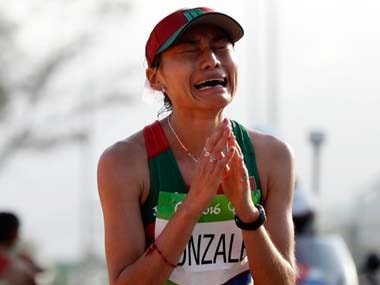 The Athletics Integrity Unit, which prosecutes cases for the IAAF, says the Mexican walker's ban for taking anabolic steroids took effect on 16 November.

Gonzalez's results have been disqualified from 17 October, but she will keep her silver medal from the 20-kilometer walk at the 2016 Rio de Janeiro Olympics and silver from the 2017 world championships in London.

The AIU says Gonzalez tested positive for trenbolone and epitrenbolone. She will be 33 when the ban expires.

Separately, the International Olympic Committee says it disqualified long jumper Ineta Radevica from fourth place at the 2012 London Games. The Latvian is the third athlete from the London final to be disqualified for doping following retests.

Armenian weightlifter Meline Daluzyan was also disqualified by the IOC.