Having spent all of 2019 out of action due to an elbow injury, Neeraj Chopra was only starting to get into the groove at the start of 2020 when the coronavirus pandemic forced him to abandon his coaching camp in Turkey and fly back to India. For the past 14 days, India’s brightest track and field star has been training in isolation at NIS Patiala, without having hurled a javelin or meeting his coach, German biomechanics expert Dr Klaus Bartonietz, who was with him in Antalya. 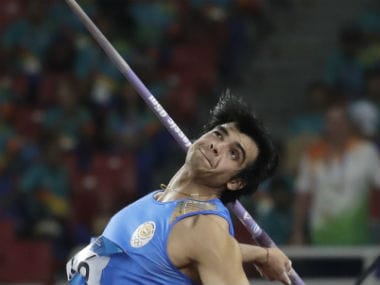 Chopra, though, says he doesn’t mind the disruption to his training schedule. “Injury-wala time yaad karke, yeh time theek lagta hai. Tab toh main sirf bed pe hi pada rehta tha (When I think back to the time last year when I was injured, these 14 days of self-isolation seem fine. Back then, I was just lying on the bed most of the time),” said Chopra, who said he will spend the rest of the two weeks of the 21-day national lockdown at NIS Patiala.

While in self-isolation, access to gym equipment has been limited. So the Haryana boy had to innovate. Chopra has been working on his throwing by chucking three balls ― weighing 800 grams, 1 kg and 1.5 kg ― against a wall near his designated room.  To work on his balance and core stability, he’s been training on a slackline wire (an elastic band on which a person balances himself), which German javelin throwers like Rio Olympics gold medallist Thomas Rohler are particularly fond of.

Since Chopra was keen on staying indoors for the past two weeks, a lot of his cardio exercises have been on the stairs at the NIS hostel. “In the wing of NIS Patiala where I have been self-isolated, there’s isn’t much in terms of high-performance training equipment. So I’m making do with whatever I have,” Chopra told Firstpost on Tuesday.

Starting Wednesday, Chopra will be allowed to go on the ground at NIS Patiala to start hurling javelins in earnest. He can also access the main gym at the facility from Wednesday. However, in times of a national lockdown, even his throwing and training sessions for the next two weeks will come with riders. “We have been told that once the 14-day self-isolation period ends, we can start throwing javelins, but with some restrictions. For one, we cannot share our javelins. Once we fling the javelin, we ourselves will have to go fetch it back. We’ll have to maintain a healthy physical distance from others during throwing sessions.

“Our coaches have also told us to segregate weights in the gym, so that no two athletes are using the same barbells or dumbells in one session. After each session, the equipment will have to be sanitised,” he said.

With the 14-day self-isolation period over, he will also be able to meet Dr Bartonietz and train with him. The German was also in self-isolation at the NIS Patiala campus, though in a separate apartment. Since November, Chopra and youngster Rohit Yadav were training under Dr Bartonietz in Turkey after Chopra had to end his South Africa training camp due to visa issues. Shivpal Singh, Annu Rani and Vipin Kasana had chosen to train along with foreign coach Uwe Hohn at South Africa's Potchefstroom.

Chopra added that with the coronavirus pandemic having thrown his 2020 competition and training schedules off track, news of the Tokyo Olympics being postponed to July-August in 2021 was welcome.

“The fact that now there’s one more year to prepare for Tokyo Olympics is great news for me. I can fine-tune technical aspects,” he said.