Los Angeles: Michael Beasley was the unlikely hero in the New York Knicks' upset of NBA Eastern Conference leaders Boston on Thursday, exploding for 32 points to fuel a 102-93 triumph over the Celtics.

Beasley's effort off the bench — including 28 points in the second half — had "M-V-P" chants ringing around Madison Square Garden. 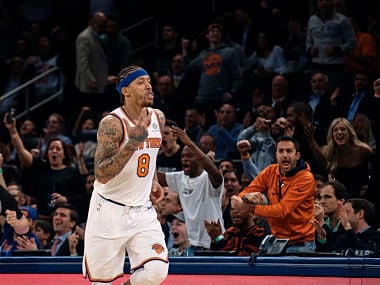 Knicks' Michael Beasley celebrates after scoring a three-point shot against the Celtics. AP

He more than compensated for Kristaps Porzingis' worst NBA game: a 0-for-11 shooting display that yielded one point and saw the Knicks' Latvian star sit out the final 17 minutes.

With the Knicks down by nine, Beasley came in for Porzingis with 5:37 left in the third quarter and promptly scored 10 points in five minutes.

"I'm just here for the team," Beasley said. "Whatever they need, whenever they need it. Scoring, rebounding, defence, just trying my best. As humbly as I can say it, I just feel like every shot that I shoot is going in."

His jump shot sealed the victory with 1:06 left to play, handing the Celtics a second defeat in as many nights after a one-point loss to the Miami Heat in Boston on Wednesday.

"Mike knows his role. If KP's out he obviously gets the bigger minutes," Knicks coach Jeff Hornacek said. "I thought he played great in filling in for him. He really helped us get some points on the board."

Porzingis, who had missed two games with a sore knee, was hoping to expunge the memory of a dismal shooting night against the Celtics in the first week of the season when he connected on just three of 14 shots from the floor.

Instead, he was even worse, missing all 11 of his shots in the first half and not even attempting one in the second.

Kyrie Irving scored 32 points for the Celtics, who lost back-to-back games for the first time this campaign.

Their closest pursuers in the East, meanwhile, notched victories.

DeMar DeRozan scored a career-high 45 points to lead the Toronto Raptors to a 114-109 comeback victory over the 76ers in Philadelphia and the Cleveland Cavaliers warmed up for their NBA Finals rematch with the Golden State Warriors on Christmas Day with a hard-fought 115-112 home win over the Chicago Bulls.

DeRozan made 13 of his 21 shots from the floor, including six of nine from three-point range.

Australian rookie Ben Simmons scored 20 points to pace the 76ers, who were without Cameroonian centre Joel Embiid, their leading scorer and rebounder, for a third straight game because of tightness in his back.

Kyle Lowry added 23 points for the Raptors, who erased a 22-point third-quarter deficit to win their fifth straight and 11th in 12 games.

They are now just 1.5 games behind the Celtics in the East, with the Cavaliers a further game back.

In a contest that featured 26 lead changes, LeBron James scored 11 of his 34 points in the fourth quarter and the Cavs held on for a 12th straight home win.

James pushed the Cavs lead to six points with a difficult fadeaway jump shot with 1:01 left to play.

A layup by Chicago's Denzel Valentine cut the deficit to 113-112 with 14.3 seconds left, but James drained two free throws with 11.1 seconds left to put Cleveland up by three.

In Phoenix, TJ Warren scored 27 points and Troy Daniels drained the go-ahead three-pointer with 17 seconds to play as the Suns downed the Memphis Grizzlies 97-95.

A Suns turnover gave the Grizzlies a last chance to win, but Tyreke Evans missed a three-point attempt at the buzzer.