Miami: Kelly Olynyk scored 25 points, Derrick Jones Jr. added 18 off the bench and the Miami Heat never trailed on the way to easily topping the Brooklyn Nets 117-88 on Saturday night. 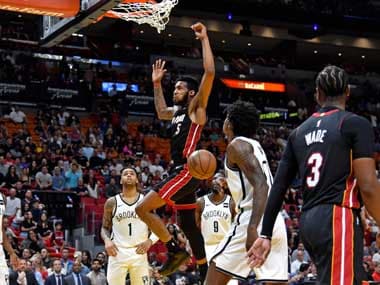 The Heat were without Goran Dragic (left calf strain) and Hassan Whiteside (left hip strain). James Johnson, who has been out with a sprained shoulder, was in uniform but did not play.

Joe Harris scored 15 and Rodions Kurucs scored 11 for Brooklyn, which has dropped 10 of its last 15 games. D'Angelo Russell and Spencer Dinwiddie each scored 10 for the Nets.

The 29-point margin was Miami's largest win of the season, and Brooklyn's largest loss. Brooklyn remained No. 6 in the Eastern Conference race, percentage points ahead of No. 7 Detroit. Miami remained No. 10 in the East, a game behind No. 8 Orlando and No. 9 Charlotte.

It's the first time Miami has won back-to-back home games since 10 and 12 January. The Heat haven't had a three-game home winning streak this season.

Jrue Holiday scored 29 points, Julius Randle had 28 and New Orleans rallied from 19 points down in the first half to beat Denver.

Frank Jackson added 16 points for the Pelicans, who were without Anthony Davis (rest) and E'Twaun Moore (thigh).

Nikola Jokic had 20 points but was limited to 6:23 in the first half because of early foul trouble. Jamal Murray also had 20 points for Denver. It was the biggest blown lead of the season for the Nuggets, who have lost consecutive home games for the first time since early November. They lost 111-104 to Utah on Thursday night.

Stephen Curry shook off foul trouble to score 28 points and spark Golden State down the stretch.

Kevin Durant scored 34 points and DeMarcus Cousins had 25 for the Warriors.

Mike Scott scored 22 points and was a surprise star for the Sixers. Ben Simmons had his second straight triple-double and 22nd of his two-year career with 25 points, 15 rebounds and 11 assists.

Phoenix lost the first three games against Los Angeles by double digits, but had the Lakers a bit discombobulated through three quarters in the season series finale.

Evan Fournier finished with 19 points, eight assists and five rebounds for Orlando, which shot 51 percent from the field. The Magic are 10-3 in their last 13 games and improved to 30-34, a half-game ahead of Charlotte for eighth place in the Eastern Conference.

Bojan Bogdanovic scored 25 points and Darren Collison finished with 23 points and 10 assists for the Pacers, who shot 55 percent.

It was Orlando's first win at Bankers Life Fieldhouse since March 31, 2016.

Luke Kennard scored 26 points, Reggie Jackson added 24 and Detroit took it to a depleted Cleveland team, building a 33-point lead in the first half.

The Pistons, who are fighting for a playoff spot in the Eastern Conference, scored 42 in the first quarter while taking a 71-38 halftime lead.

Andre Drummond had 13 points and 10 rebounds and got some extra rest for the Pistons, who play at Toronto on Sunday.

Rookie Collin Sexton scored 14 for the Cavs. Cleveland played without star forward Kevin Love, who was rested while he continues to build up strength following foot surgery.

Jonas Valanciunas had 20 points and 10 rebounds, and Joakim Noah scored 12 points to lead Memphis past Dallas.

Avery Bradley and rookie Jevon Carter each scored 15 points for the Grizzlies. Mike Conley and C.J. Miles each contributed 12 points.

Luka Doncic led the Mavericks with 22 points. Dwight Powell had 13 and Tim Hardaway Jr. scored 10. The Mavericks shot a season-low 31 percent (26 for 85) from the field.

LaMarcus Aldridge had 27 points and 10 rebounds and San Antonio led for all but 30 seconds in defeating Oklahoma City.

San Antonio moved into seventh in the West past the Los Angeles Clippers, who have an identical 35-29 record.

Oklahoma City, which has lost four straight and five of six, remains third in the Western Conference at 38-24, the same record as Portland.

Dennis Schroder scored 18 points and Russell Westbrook added 19. The Thunder were without Paul George, who missed his second straight game with a sore right shoulder.

Donovan Mitchell scored a career-high 46 points and led Utah from a 17-point fourth-quarter deficit to a win over Milwaukee.

On a night during which Rudy Gobert was ineffective, Derrick Favors had 23 points and tied a career best with 18 rebounds. Joe Ingles had 14 points and eight assists for the Jazz, who won their fourth straight.

Milwaukee's Giannis Antetokounmpo finished with 43 points and 14 rebounds in 32 minutes, but missed three free throws in the final 10 seconds.

Khris Middleton scored 29 points and Brook Lopez had 16 points, eight rebounds and seven blocks for the Bucks, whose seven-game winning streak was snapped on the second night of a back-to-back.