Just like last year, Game 3 of the NBA Finals returned to Cleveland under similar circumstances. The Warriors were up 2-0 and coming off a double-digit victory. The Cavaliers played desperate basketball to take the lead in hopes of avoiding a three-game hole. The Warriors made a comeback. And with less than a minute left, the fate of the game—and the series—hung in the balance of a few late possessions.

And once again, Kevin Durant—the 2017 Finals MVP—had the ball in his hands, the momentum running down the court, and the swagger to pull up from almost the same spot behind the three-point line from where he hit a memorable shot last year. 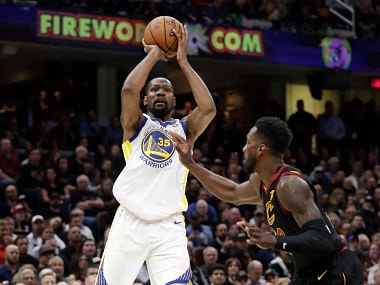 Durant played arguably the most important basketball game of his career on Game 3 in Cleveland, totalling 43 points on an uber-efficient 15-23 shooting night, grabbing 13 rebounds, dishing out seven assists, and playing elite defence. And with the Warriors up by two with 50 seconds left in the game, Durant hit a three-pointer dagger that sealed the win for his squad.

Just like last year, the Warriors are now up 3-0 over the Cavaliers and will look to do one better on last year’s Finals by completing the sweep in Game 4.

Game 3 was the perfect example of the discrepancy between the two sides, where one squad had to play at their individual and collective peak to have a chance, and the other survived even when two of its stars—Stephen Curry and Klay Thompson—misfired all night.

The Cavs, predictably, turned up the physicality to begin the game, bullying the smaller Warriors in the post, dominating the boards (a 47-37 rebound advantage), and playing more balanced beyond the expected heroics of LeBron James. Cleveland took a 13-point lead in the first half as LeBron continued his brilliance. Kevin Love had his third-straight impressive offensive game, JR Smith got his groove back at home, and the recently-freed Rodney Hood provided his team with an additional offensive spark. The biggest moment in the half came when LeBron nailed a picture-perfect self-alley-oop, the type of play that is impressive in exhibition matches and downright awe-inspiring in the biggest stage in basketball.

Even more impressive, perhaps, was the Cavs’ work on defence. After his record-breaking heroics in Game 2, Cleveland trapped  Curry all game, reducing him to one of the worst shooting nights of his career. The other ‘Splash Brother’ Klay Thompson was hardly any better.

Fortunately for Golden State, however, they also boasted this guy named Kevin Durant. KD was electric in the first half, dropping 24 points and dominating on all ends of the floor. Where Curry and Klay stuttered, KD got assistance from less-heralded contributors like JaVale McGee, Jordan Bell, and Shaun Livingston. After missing the previous six games to injury, 2015 Finals MVP Andre Iguodala returned and game solid minutes on both ends of the floor. The Warriors found themselves trailing by just six at halftime.

As is the Warriors’ tradition, they flipped the switch offensively to make a third-quarter comeback, outscoring Cleveland 31-23 in the period to take their first lead in the game. What was startling, however, that they did so without Curry or Thompson finding their range. It continued to be the Durant plus the role-players.

The game reached its zenith in the fourth when Curry finally found his range, hitting his only three with the game on the line, but finishing just 3-16 from the floor. Then, in the last minute, game Durant’s big shot, and the Cavs just didn’t have enough gas in their tank to stop the Warriors. Golden State won the game 110-102.

LeBron had another big game for Cleveland (33 points, 11 assists, 10 rebounds), Love added 20 and 13, and Hood at 14 and 6 off the bench, and the Cavs did almost everything right in throttling the offensive opportunities for the Splash Brothers.

But it is for moments like these that it helps to have Durant on your side. Even when an opponent can equal the Warriors in every other way, there is no answer for Durant. After the game, LeBron called Durant’s three an “assassin play”. KD, who wasn’t the headline in either Game 1 (LeBron) or Game 2 (Curry), made sure to bring out the “assassin” in him all night and kill off Cleveland’s hopes.

Golden State are now one more win away from their second-consecutive title and third in four years. This time last year, Cleveland played an almost-perfect offensive game to win Game 4 and extend the series for a “gentlemen’s sweep” in five. It has been well-documented that no team in NBA history has ever come back from a 0-3 deficit in any playoff series.

Game 4 could be the end of the season. With the odds stacked against Cleveland, the debate that will now remain is which Warrior—between Durant and Curry—will shine in the last game(s) to win the Finals MVP award. But if LeBron and his team can win a game and gain some momentum, they could make this series interesting for a return to Oakland this weekend.