Cleveland: Cleveland Cavaliers superstar LeBron James revealed on Friday after his team was swept in the NBA Finals that he played the last three games with a broken right hand. 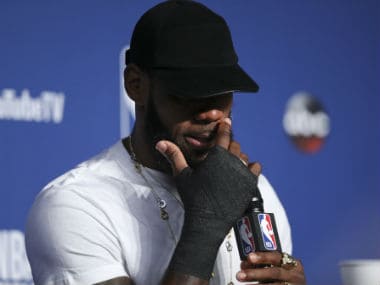 The Golden State Warriors beat the Cavs 4-0 in the best-of-seven championship series, but it was after the opening over-time loss in California when James injured himself.

"I let my emotions get the best of me and played the last three games basically with a broken hand," James said, displaying his soft cast.

James had become upset in the final seconds of regulation time in the 124-114 defeat, when a foul call was reversed to allow Golden State to equalize and JR Smith grabbed a late rebound with the score level but dribbled away from the basket, thinking the Cavaliers led.

Images of a frustrated James talking to Smith became an internet sensation.

ESPN reported James hit a blackboard in the locker room after that game and underwent two MRI exams that showed the fracture, a fact he kept hidden so the Warriors would not know.

"Obviously, I don't have a boxing hand," James said.