National Badminton Championships: Domination of stars like Saina, Prannoy shows they are a cut above the rest

Old is gold. The phrase may sound trite and over-used, but there can be no two opinions that it was the tried and tested that prevailed over the effervescent ambition of youth in the just-concluded 82nd Senior Badminton Nationals in Nagpur.

In an event that regained its sparkle after nearly a decade of non-participation by the star players, it was the battle-hardened internationals who established their class over others.
The newly-instituted format, which had the fancied stars playing only from the pre-quarterfinal stage, found the top two seeds in four of the five events go safely through to the summit clashes.

A minor upset, that saw the talented pair of Sanyogita Ghorpade and Prajakta Sawant narrowly beat No 2 seeds Poorvisha Ram and Meghana Jakkampudi 21-19, 17-21, 21-19 in the quarterfinals, prevented what would have been an unprecedented ‘clean sweep’ of the top two seeds reaching the finals of all five events in the national championships.

Strangely enough, we had two singles players currently ranked 11 in the world topple their compatriots who are presently occupying the world No. 2 berths. HS Prannoy beat the in-form Kidambi Srikanth, winner of four Superseries titles in 2017, while Saina Nehwal stunned PV Sindhu, silver medallist at the 2016 Rio Olympics and 2017 World Championships.

The Nationals ended in a blaze of glory for 28-year-old Ashwini Ponnappa, who underlined her status as country’s premier doubles player by scoring a grand brace – the mixed doubles title with Satwiksairaj Rankireddy, and the women’s paired event with N Sikki Reddy.

Ponnappa has evolved into an all-round doubles player, exerting enormous power from the back court, along with pleasing control at the net.

The 17-year-old Rankireddy, easily the most prodigious Indian doubles talent to emerge in the past few years, was unlucky to miss out on men’s doubles crown. The Andhra Pradesh powerhouse and Chirag Shetty went down in two extra-points duels in their humdinger of a final against B Sumeeth Reddy and Manu Attri.

The conclusion of the riveting 15-21, 22-20, 25-23 cliff-hanger witnessed some avoidable over-the-top celebrations from Reddy that left the more conservative members of the packed audience at the Divisional Sports Complex shaking their heads in dismay.

Prannoy’s 50-minute 21-15, 16-21, 21-7 triumph over Srikanth gave the Kerala-born shuttler a modicum of revenge for his narrow semi-final defeat at the hands of his regular sparring partner at the recent French Open. 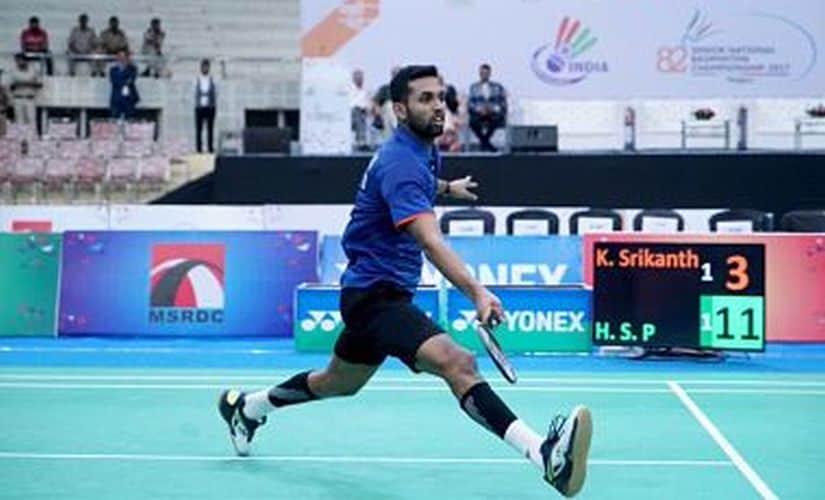 HS Prannoy got the better of Kidambi Srikanth in the final. Image courtesy: Twitter @SNBCIndia2017

Prannoy had been gutted after his defeat in Paris, from a potentially match-winning 18-16 position in the deciding game. However, this time his outstanding fitness, iron length and quick adjustment to the drift in the hall, as also his ability to counter-attack at will, helped him tame his Gopichand Academy batchmate.

The recent strides that Prannoy has taken, coupled with his consistency, bode well for the 25-year-old shuttler’s bid to enter the top ten in the Badminton World Federation (BWF) rankings.

He would be hoping for some strong performances in the China Open Superseries Premier and Hong Kong Open Superseries that come up, one after the other, from next week.
Srikanth had won the China Open in 2013, beating the legendary Lin Dan in the final, and it could be Prannoy’s turn to tame the likes of ‘Super Dan’, Chen Long and Shi Yuqi in front of their home crowds. But those watching the National final were left with the nagging impression that Srikanth did not go all out in the decider, and appeared to be saving his body and mind for the sterner tests in East Asia.

In what was the ‘piece-de-resistance’ of the final evening in Nagpur, the 27-year-old shuttle queen Saina Nehwal moved on the court with speed and fluidity of old, and displayed the grit and determination that had taken her to the world No 1 position in 2015. She dismantled the sterling challenge of her 22-year-old heir-apparent and current world No 2, PV Sindhu.

It also underlined the fact that she has totally recovered from the physical and mental scars of the knee reconstruction surgery she had immediately after the Rio Olympics in September last year, and which had threatened to cut short her career.

The manner in which the Hyderabad-based Haryanvi withstood the pressure exerted on her, especially in the second game, by her younger rival — who herself was aspiring for her third national crown after wins in 2011 and 2013 — revealed that there is plenty of life left in those ageing limbs.

Nehwal played the riveting extra-points duel with great poise, awareness and concentration, and simply refused to yield, as she won on her sixth match-point.
It was a cerebral triumph, for Nehwal employed the best possible tactics to blunt the edge of Sindhu’s aggression. She mounted a sustained attack, repeatedly employed the body smash for which she is justly famous, and cramped Sindhu, forcing her taller rival to defend desperately rather than take charge of the rallies.

The older girl also was marginally better in the net duels, in which both players engaged repeatedly in an effort to gain the initiative in the rallies.
Winning her third national crown without dropping a single game in four outings would have given Saina plenty of encouragement for her forthcoming examination in the China and Hong Kong Opens, and her bid to re-enter the top ten.

She has effectively been able to tame the demons in her mind that had led her to express the depressing thought, exactly a year ago, that her career was probably over.

As for Sindhu, her struggle with consistency continues, and it is becoming increasingly difficult to predict the results of her matches against quality opposition.
She can decimate the best in the world on her day, and can get tentative and nervy against inferior opposition on another, as happened in her semifinal against qualifier Ruthvika Shivani, no doubt a talented player, but not quite in Sindhu’s class yet.

Mention must also be made of the heartwarming performances of Subhankar Dey and 16-year-old Lakshya Sen, both of who cantered through the qualifying rounds, and barged into the semi-finals.
Dey knocked out Daniel Farid and Singapore Open champion B Sai Praneeth, before coming a cropper against Prannoy, while Sen scored noteworthy wins over Pratul Joshi and Ajay Jayaram, and even put the redoubtable Srikanth to test before losing his semifinal at 16-21, 18-21.

The event marked the first occasion since 2007 that all of country’s top players took part in the national championship. A couple of them, like the Verma brothers, Sourabh and Sameer, participated in 2015 and 2016, but the marquee names have been conspicuous by their absence.

Whether the icon players were gently pressurised this year by the new president of the Badminton Association of India (BAI), Himanta Biswa Sarma, or was it the ten-times-enhanced purse of Rs. 60 lakhs that made them take time off from their busy international schedule and participate, it is hoped that this becomes a precedent, and that the Nationals will once again become the jewel in the crown of the domestic tournament schedule.