Mumbai: A 64-year-old man died after suffering a heart attack while running in the Tata Mumbai Marathon 2020 on Sunday morning, officials said.

Gajendra Manjalkar, a resident of Nalasopara in neighbouring Palghar district who had been participating in the marathon for last four years, came to Mumbai to participate in the latest edition of the run on Sunday. 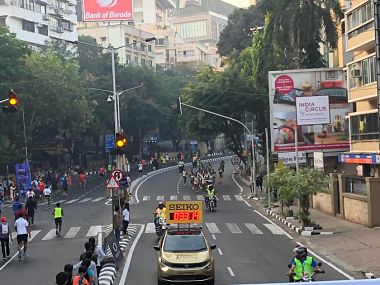 He collapsed while running the marathon, a police official said.

He was later taken to Bombay Hospital in south Mumbai where doctors declared him brought dead, he said.

Talking to PTI, Dr Gautam Bhansali, consultant physician at Bombay Hospital, said 10 to 12 people were brought to the hospital with various complaints, including dehydration.

"Manjalkar was declared dead on arrival. He died due to a heart attack," Bhansali said.

The body was sent to GT Hospital for a postmortem, he added.

Besides, a runner, Sanjay Bafna (51), was undergoing treatment for brain stroke, while angioplasty was performed on another participant, identified as Himanshu Thakkar (47), at the Bombay Hospital, Bhansali said, adding that both of them were currently recuperating.

The 17th edition of Tata Mumbai Marathon was held in the morning in which over 55,000 runners participated.