Venus Williams will be aiming for her sixth championship at Wimbledon when she faces Garbine Muguruza in Saturday's final. Follow our live blog for scores and updates.

Liu had finished as the runner-up at French Open 2017.

Liu becomes the first American to win the girls' singles title since 1992.

With the title win, Garbine Muguruza will move into the top 5 of the WTA rankings on Monday.

Venus Williams will rise to World No 9.

Garbine Muguruza wins her maiden Wimbledon title with a 7-5, 6-0 win over Venus Williams.

The Spaniard ran away with the second set and took just an hour and 17 minutes to clinch the title.

The Spaniard is a set away from her maiden Wimbledon title.

Confirmed: Centre Court to play under the roof

Venus Williams and Garbiñe Muguruza will walk out within minutes and play the final on time and under the roof. It will not be opened at any stage for their match even once it stops raining.

Garbine Muguruza has one Grand Slam to her name - the 2016 French Open - and she reached the Wimbledon final in 2015.

Stats for the women's final:

Venus leads the head-to-head against Garbine Muguruza leads 3-1. However, Muguruza won their most recent clash.

Thank you so much for joining us in our live coverage of the Wimbledon women's final.

Do tune in tomorrow as well for the men's final: Roger Federer takes on Marin Cilic. That promises to be a cracker.

Before we sign off, here's our image of the day. 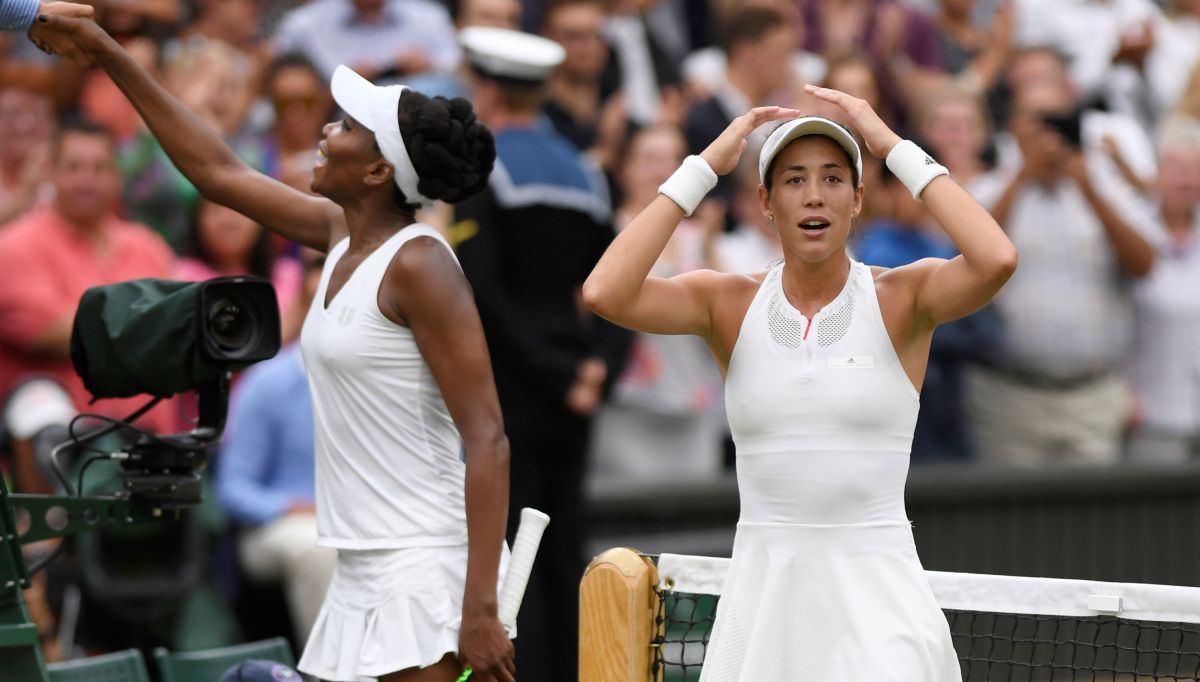 Liu had finished as the runner-up at French Open 2017.

Liu becomes the first American to win the girls' singles title since 1992.

With the title win, Garbine Muguruza will move into the top 5 of the WTA rankings on Monday.

Venus Williams will rise to World No 9.

Muguruza, who lost in the final at the All England Club in 2015, saved two set points in the 10th game of the first set, and then won nine straight games to win.

The match was played under a closed roof on Centre Court, the first time a women's final had been played indoors.

For Muguruza, it was her second Grand Slam title. She also won the French Open last year.

Williams had been trying to win her sixth Wimbledon title. Her last one came in 2008.

A speech full of grace from the 2017 ladies' runner-up Venus Williams...#Wimbledon pic.twitter.com/l24sHMCDW7

"Two years ago I lost to Serena and she told me maybe one day I would win. Here I am!"

It's been 17 years since Venus Williams won Wimbledon for her first Grand Slam title. All that time later, she will be aiming for her sixth championship at the All England Club and eighth major trophy overall when she faces Garbine Muguruza of Spain in Saturday's final.

Williams is 37 and would be the oldest woman to win a Grand Slam title in the Open era. As it is, she is the oldest finalist at Wimbledon since Martina Navratilova was the 1994 runner-up at age 39.

Muguruza, meanwhile, is 23 and owns one major championship, from the 2016 French Open. This will be her second Wimbledon final; she lost to Williams' younger sister, Serena, in 2015.

"I'm definitely in the position I want to be in," Williams said. "It's a long two weeks. Now, knocking on the door for a title. This is where I want to be."

On Saturday, she'll be playing for the Venus Rosewater Dish for the ninth time in her 20th Wimbledon appearance.

"There's still a lot to be done. I have one more match that I'd like to be the winner of," Williams said. "I have to go out there and take it and play well."

Muguruza, however, beat Serena to win the French Open title in 2016. And she's expecting the same kind of atmosphere despite the unfamiliar opponent.

Besides her experience on the court, Muguruza will also have some experience behind her off it. She has been working with 1994 Wimbledon champion Conchita Martinez recently.

"I think she's helping me to deal with the stress of the tournament, because it's a long tournament," Muguruza said. "So she just knows how to prepare, how to train, what to do.

"Not that I'm doing something different, honestly. But to have her by my side gives me also this little confidence on having someone that has won before."

Williams and Muguruza have played each other four times before, and the American has won three of them. They have never before played on grass, though.