The women's quarter-finals are the main course at Wimbledon on Tuesday, but former men's champion Novak Djokovic is serving up a juicy appetiser on Centre Court, where fans were short-changed by player withdrawals a week ago.

Second seed Djokovic's fourth-round match against France's Adrian Mannarino was pushed back from Monday due to the epic five-setter that saw Gilles Muller defeat Rafa Nadal, in one of the biggest shocks of the championships. 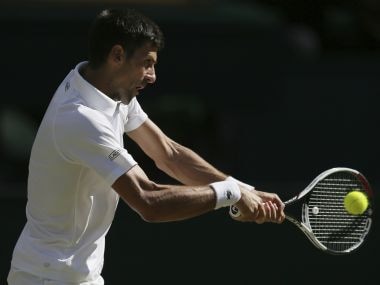 The Serb will be first up on Centre Court, at midday (1100 GMT), in a bonus event before the women's quarters. It comes exactly a week after ticketholders saw two successive matches on the same court finish in the second set as players retired hurt.

After the Djokovic battle, it will be all about the women's last eight on a day that is forecast to be cloudy with some showers, with the temperature hovering round 17 Celsius.

In a clash of tennis generations, five-times Wimbledon winner Venus Williams - at 37, the oldest player in more than two decades to reach the last eight - will go toe-to-toe with 20-year-old French Open champion Jelena Ostapenko.

Next up on Centre Court is second seed Simona Halep, who will become the first Romanian woman to reach world number one if she beats sixth seed Johanna Konta, the first British woman in the quarter-finals for 33 years.