Catch all the live scores and updates of the Singapore Open finals as Kidambi Srikanth locks horns with fellow Indian Sai Praneeth in the men's singles final. Carolina Marin will take on Tai Tzu Ying in the women's singles final.

World no. 1 Tai Tzu wins her 5th title in five months and 3rd in 2017 after getting the best over Olympic champion Carolina Marin. The Chinese Taipei shuttler has defeated Marin in second consecutive Super Series finals as the Spaniard's unlucky run continues. Complete domination otherwise by Tai Tzu!

Tiring rallies and a barrage of backhand shots gave the Chinese Taipei shuttler the edge over Marin in the first hurdle. However, Marin hasn't done anything wrong. It's just that Tai Tzu has been successfully reading Marin's movement.

What an outstanding performance by the 24-year-old Praneeth as he takes the match away from Kidambi by showing his attacking prowess in the second and third game to win the elusive Singapore Open title!

Amazing fight back from the Canada Open winner as he turns the game from being 1-6 down to win the game 21-17 and force the match into a DECIDER! This is what Kashyap was talking about when he said that Praneeth's shot selection towards the end of the game is just unmatchable!

Known for making a slow start to the match, Kidambi started off well against fellow Indian Sai Praneeth by taking a healthy lead at the break and almost maintaining it towards the end of the game. Kidambi's footwork has been noteworthy so far as Praneeth is tested at the other half of the court.

Kidambi Srikanth vs Sai Praneeth
​
It's the all-Indian clash between the World no. 29 and World no. 30 in the final of the men's singles. Both Kidambi and Praneeth have faced each other on five occasions where the latter leads 4-1 and will look to put his hands on his maiden Super Series title!

And that brings an end to our coverage of the Singapore Open. Thank you so much for following along.

Unlucky for the third time in third consecutive Super Series final but well played yet again!

Carolina Marin put up valiant fight against the World no.1 Tai Tzu Ying, clinches the silver medal in the #SingaporeSS. pic.twitter.com/x8lOsiMSWx

World no. 1 Tai Tzu wins her 5th title in five months and 3rd in 2017 after getting the best over Olympic champion Carolina Marin. The Chinese Taipei shuttler has defeated Marin in second consecutive Super Series finals as the Spaniard's unlucky run continues. Complete domination otherwise by Tai Tzu! 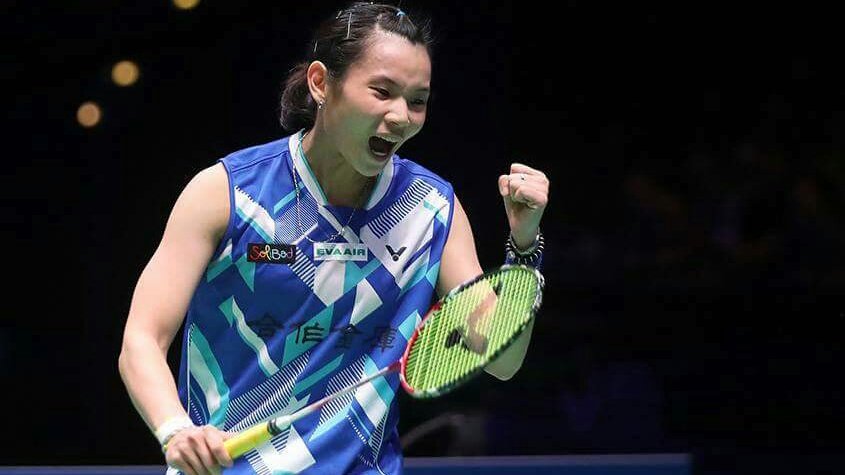 13-11! Well, that was mesmerising stuff from Tai Tzu to drift the shuttle at the last moment. It shouldn't be a surprise as the Singapore Indoor Stadium is known for its drift.

12-10! Tai Tzu is doing everything she can to stop Marin's attack after the break. The only way out for Marin is to become more tactical from here on and try to stretch Tai towards the basepoint

11-8! Tai Tzu has a 3-point advantage in the second game against Marin #SingaporeSS

6-6! The second game has started quickly as both shuttlers look to put their best performance forward in the crucial hurdle. Marin needs a healthy lead to unsettle Tai Tzu and force a decider!

Singapore: Men's singles shuttlers Kidambi Srikanth and B. Sai Praneeth on Saturday registered easy wins in the semi-finals of the $350,000 Singapore Open, marking the first instance of an all-India final in a Superseries event to be fought on Sunday.

World No.29 Srikanth registered a thumping 21-13, 21-14 win over No.26 Anthony Sinisuka Ginting of Indonesia in 42 minutes at the Singapore Indoor Stadium. File photo of B Sai Praneeth and Kidambi Srikanth. AFP

Though Srikanth is a bigger name than Praneeth, having won the 2014 China Superseries Premier and 2015 India Superseries and a quarter-final appearance at the Rio Olympics, the latter has a 4-1 head-to-head record. Srikanth will not be happy facing an opponent who knows his game and someone who has got the better of him so many times.

But Srikanth has the big-game experience that will give him an added advantage.

During the semi-final, Srikanth showed his experience against Ginting. He was trailing 4-9 in the first game and then he registered an emphatic 10 points on the trot in a display of aggressive badminton. Ginting couldn't recover from this as he conceded the first game.

In the second game, Srikanth continued his high jump smashes as he raced to a 9-1 lead. Ginting tried his best to came near Srikanth but it proved to be difficult. The closest Ginting came was at 14-16. But the Indian snatched five points on the trot to seal the game.

Sai Praneeth was on a roll in the second semi-final. Keun looked a bit tired and couldn't move well, while Praneeth rocked winners consistently.

A 10-1 lead in the first game paved the way to a 21-6 win, while in the second game it was almost a similar show as the Indian cantered home to a 21-8 triumph.

Meanwhile, the women's singles title will be a contest between Olympic champion Carolina Marin of Spain and top seed Tai Tzu Ying of Chinese Taipei.

On Monday, BBMP started a demolition drive. As per the officials of the civic body, at least 15 places in Mahadevapura zone have been identified, which were choking flow of the rainwater

The 21-year-old woman, from Eina village in Jawhar taluka, went into labour on the intervening night of Saturday-Sunday, a medical officer said

Addressing the eighth national convention of the Nationalist Congress Party, Pawar slammed the Modi government over rising inflation, unemployment, its handling of the farmers' protests and "fanning hatred" against religious minorities in the country