Catch all the live scores and updates from the 2017 BCA Indonesia Superseries Premier as HS Prannoy and Kidambi Srikanth will be in action against their respective opponents to seal a place in the final.

Srikanth Kidambi becomes the first Indian to play in the men's singles final of the Indonesia Superseries Premier. Coach Mulyo Handoyo deserves a lot of credit, doesn't he?

Srikanth Kidambi throws his racquet and lets out a roar after playing magnificent badminton throughout the match. He beats Son Wan Ho 21-16, 14-21, 24-22 to enter the final!

Despite trailing for the major point of the game, the Korean sets up a fine comeback through a handful of forehand and backhand drives to force the match into a decider. Srikanth committed a lot of errors towards the end of the game.

The Indian shuttler has played a series of attacking shots as Son Wan was caught napping at times on the forecourt. There is no hiding that Kidambi likes to play net shots and he has shown it in the first game.

Japan's Sayaka showed a resilient performance towards the end of the second game to snatch a series of points. Jindapol was stretched on the backcourt at times despite her quick footwork.

India's Srikanth takes on second-seed Korean Son Wan Ho in what will be their seventh meeting in four years. The Korean enjoys a 4-2 lead in the overall head-to-head encounters against Srikanth. However, the Indian ace shuttler won the previous match in straight games at the 2015 Denmark Open.

Finally, a humdinger of a match comes to an end in favour of the unseeded Kazumasa who put up a fine show despite Prannoy's attacking domination throughout the match. Notably, the Japanese shuttler was 5 match points down in the second game but he managed to get a grip over his net flicks and take the game away from Prannoy. Kasumasa also defeated Rajiv Ouseph in a similar fashion yesterday with a fine comeback to snatch the second and third game and enter the semis.

Elsewhere, it was a heartbreak for Prannoy who played his first Superseries semi-final and looked certain to win the tie. He succumbed to errors and mis-hits towards the end of both, second and deciding game which proved costly at the end.

That was an incredible fight from both Prannoy and Kazumasa, however, the latter wins the second game and sends the match into a decider. The Japanese shuttler is playing exquisite attacking drives to make the difference.

The third game gets underway!

Now that was a clinical show from World No 25 Prannoy as he gets the better of a defensive Kazamasu in 20 minutes and takes a 1-0 lead. The Kerala-born shuttler's court coverage has been admirable in the tournament so far. Kazamasu, on the other hand, relied more on his defensive side of the game.

Both unseeded players take on each other for the second time in a BWF tournament. Sakai got the better of Prannoy last time they met at the same event in 2013. However, the Indian shuttler is in the form of his life after registering emphatic wins over former World champion Lee Chong Wei and reigning Olympic winner Chen Long.

All eyes will be on Prannoy as he plays his first ever Superseries semi-final game.

Don't forget to cheer for your favourite shuttlers!

So, that's all folks! What an entertaining day it has been for badminton and especially for Kidambi Srikanth who reached his second consecutive Super series finals. Unfortunately, we won't be able to witness an all-Indian final in the men's singles as HS Prannoy was ousted by Japan's Kazamusa Sakai in three games. Sung Ji Hyun will play Sayaka Sato in the final of women's singles. We hope you enjoyed our coverage. Remember, we will be back again for the final day of the Indonesia Super Series Premier.
Sung Ji Hyun beats Beiwen Zhang: 21-10, 8-21, 21-10 Korea's Sung Ji enters the final of the Indonesia Open women's singles by winning a three-gane thriller against Beiwen Zhang of America. Sung Ji lost focus in the second game but she responded to that well and won the third and final game. It's Sayaka Sato vs Sung Ji Hyun in the final tomorrow.
Sung Ji Hyun wins the first game: 21-10 Out and out dominance by Korean Sung Ji in the first game against Chinese American Beiwen Zhang. This match is the sixth consecutive semi-final the World No 3 has played in.

Oh, look who is happy!

Hang on guys, amidst the cricket fever, pause to applaud brilliant performances from @srikidambi and @PRANNOYHSPRI. Proud of you.

Srikanth Kidambi becomes the first Indian to play in the men's singles final of the Indonesia Superseries Premier. Coach Mulyo Handoyo deserves a lot of credit, doesn't he? 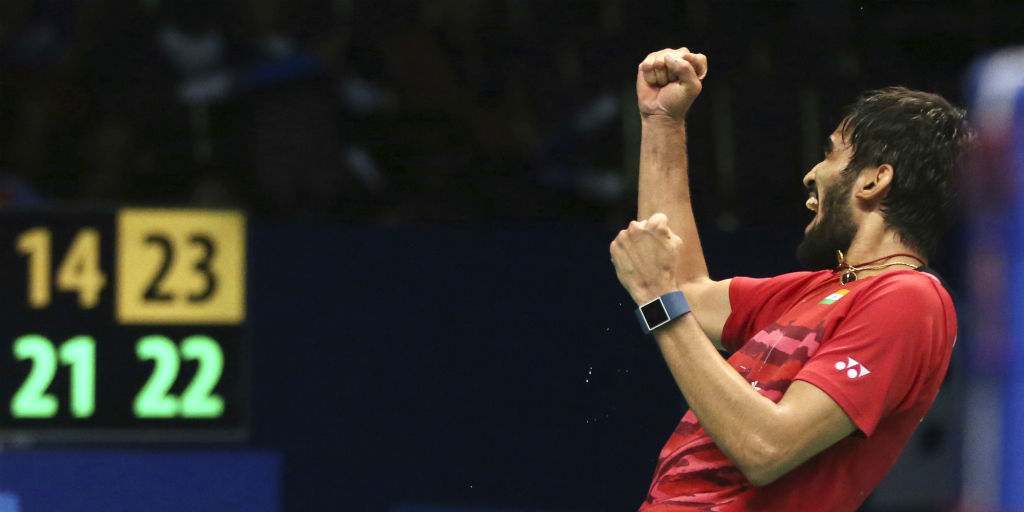 What a match. What an absolutely brilliant match. @srikidambi showed his class and brought up his A-game against Son Wan Ho. #IndonesiaSSP

Quarter-finals report: Indian shuttler HS Prannoy on Friday stormed into the semi-finals of the Indonesia Open Superseries Premier after defeating reigning world and Olympic champion Chen Long of China in what he termed was a "very exhausting" quarter-final battle at the Jakarta Convention Center. HS Prannoy and Kidambi Srikanth in action at the Indonesia Open. AP

A day after knocking Olympic medallist and six-time Indonesia Open winner Lee Chong Wei out, the unseeded Prannoy stunned Long 21-18, 16-21, 21-19 in a match lasting an hour and 15 minutes.

"The match was very exhausting. I knew that Chen Long felt the same. I also knew that he even more exhausted as I did not make any mistake in the match, capable of making the shuttle still in the badminton lawn," Prannoy said after the match, as reported by Xinhua news agency.

Long's defeat to the Indian also ended China's campaign in the men's singles category of the tournament.

Prannoy played aggressively from the start and never allowed Long to dictate the terms. The Chinese, however, looked rusty as he is coming into the tournament after a break. Long struggled with his movement and conceded the first game 18-21.

He sealed the second game, riding on his deft net-game. But Prannoy then again got back to his very best and snatched the third by forcing Long to retrieve from difficult and wide positions.

Prannoy joined compatriot Kidambi Srikanth in the semi-finals as the latter got the better of Chinese Taipei's Tzu Wei Wang 21-15, 21-14 in 37 minutes.