WE HAVE A NEW WINNER!

Hyderabad Hunters are crowned as the CHAMPIONS after putting up an outstanding show to beat Bengaluru Blasters 4-3 in front of the home crowd!

Satwiksairaj Rankireddy's smashes and Pia's defence complemented each other in that opening game which the Hunters win 15-11!

Carolina Marin remains unbeaten in this edition of PBL beating Kirsty Gilmour 15-8, 15-14. The Hyderabad Hunters captain not only wins the match but also levels scores with the Blasters side to ensure the Final goes into a decider in the mixed doubles tie. What a player!

15-8! The Hunters Army are loving it. Marin takes a 1-0 lead over Gilmour in this exciting women's singles tie. Both shuttlers mixed their shots well but it was the Spaniard who eventually made most of her chances.

Viktor Axelsen completely outplays Sai Praneeth to win 15-8, 15-10 in the third match of the day. The captain puts Bengaluru Blasters back into the lead. The Blasters now lead 3-2 in the Final.

Viktor Axelsen wins the 1st game 15-8! It was complete domination by the Dane who never let the Indian shuttler gain any kind of foothold in the opening game. Will Praneeth enforce a decider or will Axelsen help Blasters take the lead once again in the Final

What a win for Lee Hyun Il and the Hyderabad Hunters. Lee wins 15-7, 15-13 to hand the Hunters the lead in this final.

15-7! in Lee's favour. The Korean takes a 1-0 lead over a struggling Dey in the first men's singles tie of the day. The Indian has clearly struggled to lift the bird from the sidelines. He is being given some tips by coach Arvind Bhat on the touchline

It is Bengaluru who draw first blood in the Final encounter. The duo of Mathias Boe and Kim Sa Rang continue from where they left off last night to win the match 15-9, 15-10 to guide the Blasters to a 1-0 lead.

The in-form Bengaluru Blasters duo of Mathias Boe and Kim Sa Rang win the opening game 15-9!. They looked completely in control throughout the match barring a couple of unforced errors here and there.

What a final!!! It went till the last game and it is Hyderabad Hunters who lift their maiden title. The Hunters superbly lead by Carolina Marin managed to win the tie-decider to win the third edition of PBL. The duo of Satwiksairaj Rankireddy and Pia Zebediah were excellent in the final game to win the title for their team. 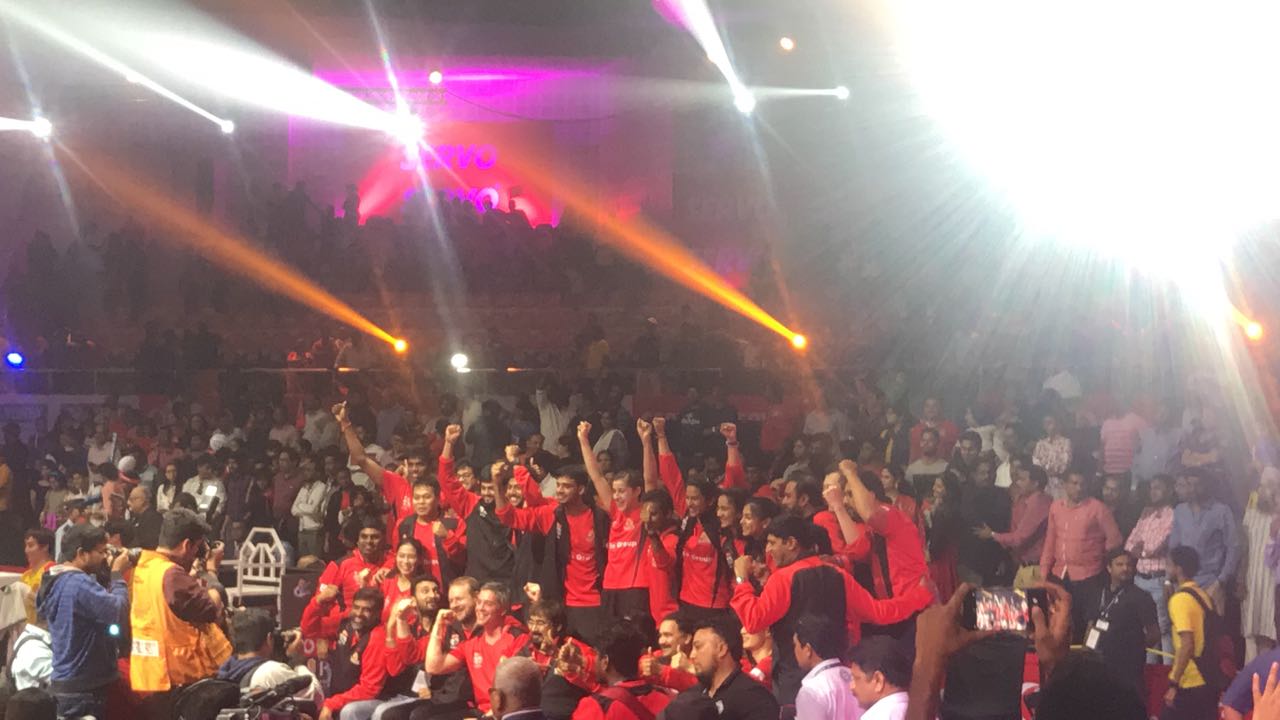 The Hyderabad camp was in raptures after winning their maiden title 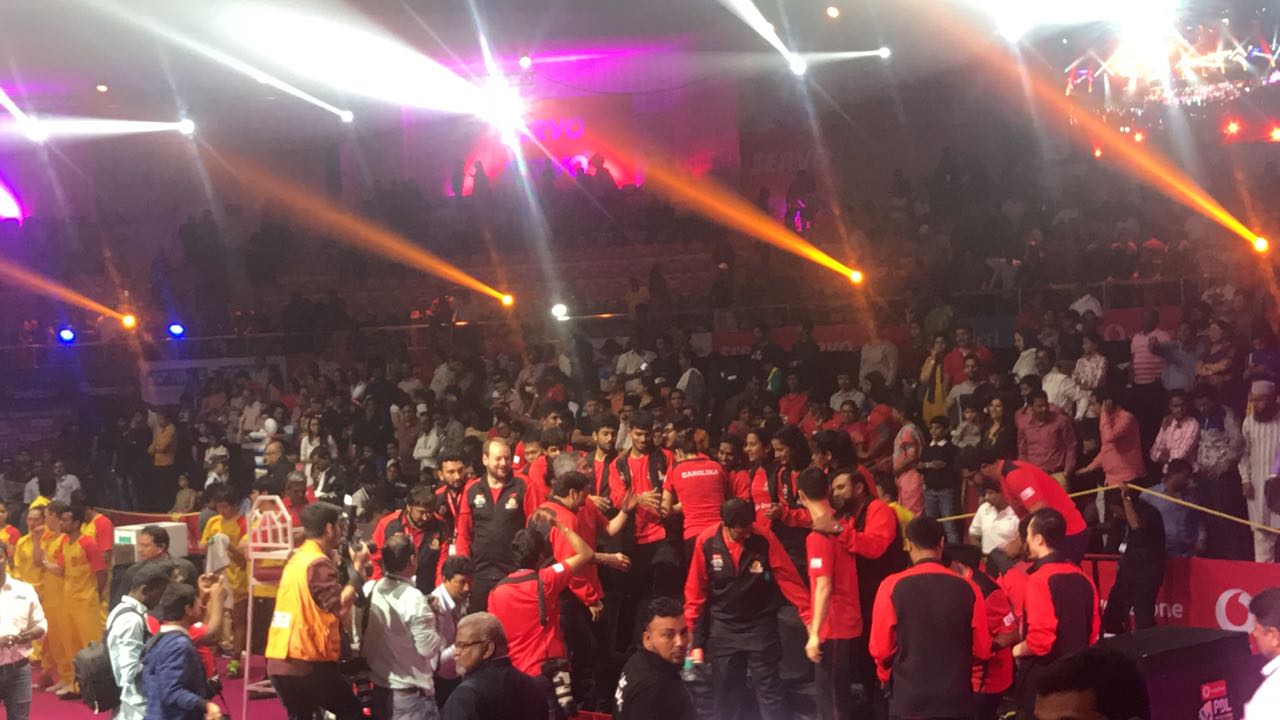 WE HAVE A NEW WINNER!

Hyderabad Hunters are crowned as the CHAMPIONS after putting up an outstanding show to beat Bengaluru Blasters 4-3 in front of the home crowd!

Satwiksairaj & Pia Zebadiah come out on top to take the game against Kim Sa Rang & Sikki Reddy to win the title for @Hyd_Hunters!#HYDvBLR #VodafonePBLFinal #SmashTheHouseDown pic.twitter.com/xAYOftvG7Y

14-10! Satwik and Pia have played smartly from the forecourt to restrict the Blasters duo. They are just 1 point away from winning the title.

13-10! @satwiksairaj smashes and serves his way into the lead. The Hunters are two points from being crowned the champions
LIVE: https://t.co/cT2ZsbWFGy #VodafonePBLFinal #HYDvBLR

10-8! The Blasters hold on to their 2-point lead in the 2nd game. The players, the camp and the supporters will be hoping for a decider 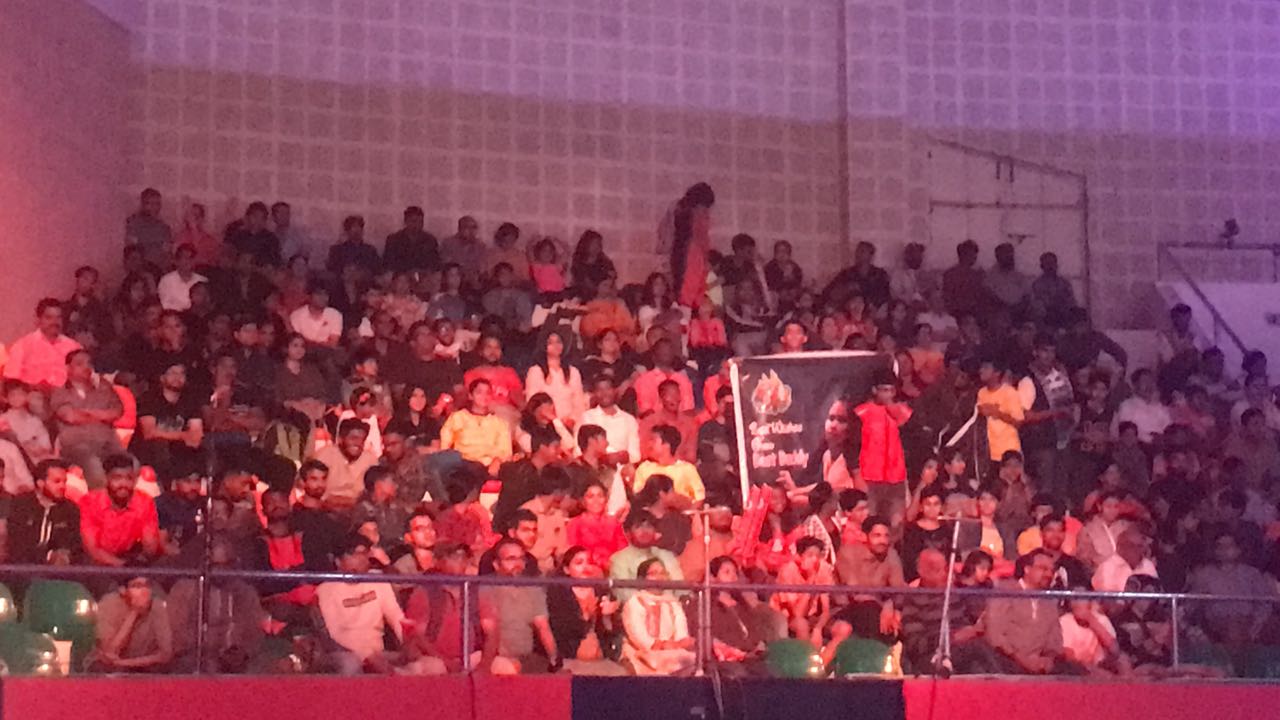 Preview: After 22 days of action, it is time for the finals of the Premier Badminton League 2018. After league games and knock-outs, the league is down to two teams who will be featuring in their maiden final.

The Hyderabad Hunters led by former World No 1 and Olympic champion Carolina Marin will go up against the Bengaluru Blasters side led by World No 1 Viktor Axelsen.

Both teams have had contrasting paths into the finals. The Hunters beat Delhi Smashers comprehensively 3-0 in their semi-final tie to book their berth, while Bengaluru Blasters had to labour past tournament debutants Ahmedabad Smash Masters 4-3 with the final mixed doubles match becoming the all-important tie.

The Hunters' road to final was a roller-coaster of sorts where after a rollicking start against the North Eastern Warriors, they lost to Ahmedabad Smash Masters in a close encounter but were completely outplayed in the subsequent group clash against Delhi Dashers.

After that defeat against the Dashers, the Hunters switched gears and completely annihilated their next two opponents Awadhe Warriors and Bengaluru Blasters. They continued their unbeaten run in the semi-final against Delhi Dashers to reach the final.

The Blasters won their first two matches against Delhi Dashers and Mumbai Rockets, but lost their following clashes against the Warriors, Chennai Smashers and the Hunters. The losses against Warriors and Smashers were very close games, similar to their semi-final encoutner against Ahmedabad Smaash Masters where they ended up on the right side.

In the previous encounter between the two finalists, the Hunters had completely decimated the Blasters and the Carolina Marin side boasting of names like B Sai Praneeth, Satwiksairaj Rankireddy will hope to have a repeat of the performance against the Blasters side comprising players like Sikki Reddy, Chong Wei Feng and led by Axelsen.

Union Budget 2022-23: The government should set aside funds and loans at low interest rates for tech firms