It's time for the quarter-finals at the Australian Open 2018. Follow our live blog for regular scores and updates from all the matches at Melbourne.

The second seed will face Elise Mertens in the last-four.

The Spaniard wins the second set 7-3 in the tie-break.

Caroline Wozniacki drops a bagel in the first set of her quarter-final against Carla Suarez Navarro.

Marin Cilic advances to the semi-finals after Rafael Nadal retires hurt trailing 0-2 in the fifth set.

This is the second time that the Croatian has reached the last-four of the Australian Open.

Marin Cilic has levelled the match by winning the fourth set against top seed Rafael Nadal.

The top seed is one set away from reaching the last-four.

Nadal's forehand has been clicking beautifully and he's serving extremely well. Two sets away from the semi-final.

The 23-year-old Brit is through to his first Grand Slam semi-final.

Kyle Edmund is one set away from his maiden semi-final!

Six double faults in the match so far from Dimitrov, including three in one game, but he's fought back to level this match.

Are we in for another upset on Rod Laver Arena?

Next up: It's the first men's quarter-final!

Elise Mertens is through to her maiden Grand Slam semi-final!

Mertens is looking to reach her first Grand Slam semi-final and she is just one set away.

Thank you so much for following along with our live blog today!

We'll be back tomorrow for the remaining quarter-finals. Do tune in.

All the results from Day 9:

Caroline Wozniacki is through!

The Dane, who has never won a Grand Slam title, will face another unseeded player, Elise Mertens of Belgium, on Thursday for a place in the final.

Take a look at the final stats from the Wozniacki-Suarez Navarro match: 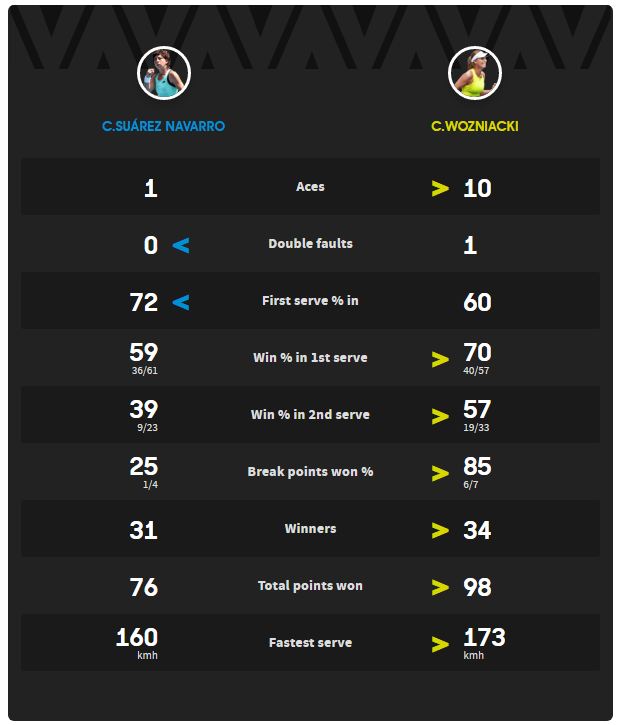 The second seed will face Elise Mertens in the last-four.

The second seed jumps ahead to 5-2 and will now serve for a place in the semi-finals.

Wozniacki consolidates her break for a 4-2 lead.

Gutsy hold from the Dane and now she just needs two more games for victory.

Suarez Navarro wrestles out a tough hold to stay in touch at 2-3.

She trails by one break in the deciding set.

Wozniacki gets the break in the 3rd set!

She breaks for 2-1 and then consolidates with a love-hold.

Wozniacki is three games away from a place in the semi-finals.

Take a look at the stats from the second set. 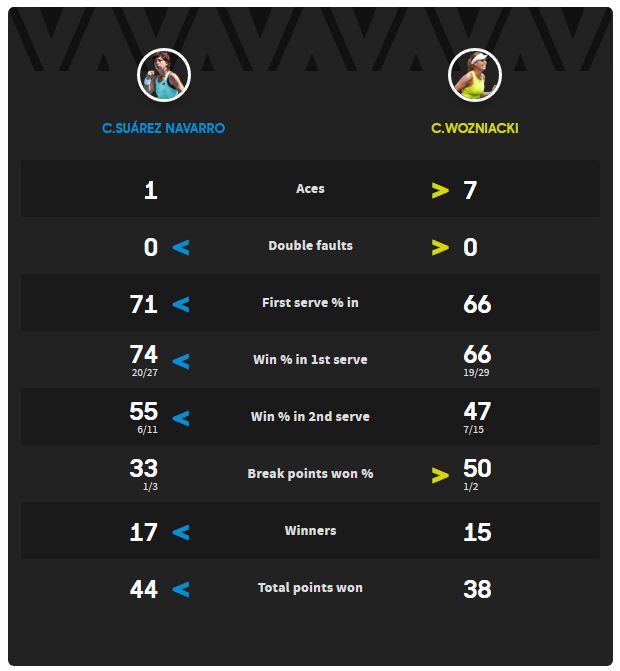 Rafael Nadal knows his path to a 17th grand slam title will only get tougher after a relatively routine run of opponents since his French Open triumph last June when he lines up against Marin Cilic in Tuesday’s Australian Open quarter-final.

The 31-year-old Spaniard dropped his first set of the tournament on Sunday before prevailing in a slugfest against Argentina’s Diego Schwartzman, the first true test of Nadal’s famed grit after three straightforward wins in Melbourne.

“All the matches are tough, and if you are in the quarter-finals of a grand slam, you can’t expect an easy match,” Nadal said after suppressing Schwartzman in seven minutes under four hours.

“Against Marin will be a tough one, but at the same time, is a beautiful match to play against a great player. We know each other. We played a couple of times already.”

Nadal will take heart from his 5-1 head-to-head record against the Croatian 29-year-old, who won their first meeting in 2009 but has since struggled against the powerful left-hander.

Cilic, however, would like to believe he is better equipped to take on top players like Nadal following his 2014 US Open triumph and run to last year’s Wimbledon final.

”Throughout my career, I knew that if I‘m playing well, if I‘m top of my game, that I can challenge most of the guys on the tour,“ he said. ”With the win at the S. Open that, you know, I believe it just became stronger.

“I believe in my own game, I believe in what I‘m doing. I think I‘m moving the right direction. You know, it’s obviously a big challenge playing them, but that’s what we also work for on the training.”

Third seed Grigor Dimitrov, survivor of a fourth-round thriller against home favourite Nick Kyrgios, will also be in action against the sole surviving Briton, Kyle Edmund.

The second-seeded Caroline Wozniacki, who could return to the No 1 ranking with a win here, plays Carla Suarez Navarro later in the evening.