Sepp Blatter and Michel Platini were "totally irresponsible" to agree a payment that has brought ignominy to world football, according to Prince Ali bin Al Hussein, who hopes to take over FIFA next month.

The Jordanian crown prince said the global governing body would be heading for a new "catastrophe" if it doesn't elect the right candidate to succeed Blatter in the vote on February 26.

Eight year bans against Blatter and Platini have left the pair in disgrace and fighting to save their names. Prince Ali said however there was no way they could avoid trouble over a two million Swiss francs ($2 million/1.8 million euro) payment approved by Blatter to Platini in 2011. 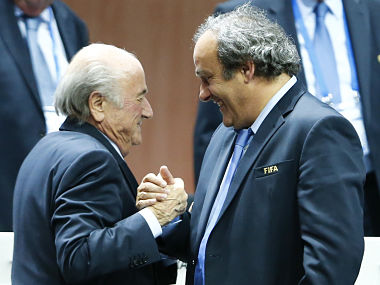 The two football leaders said the payment was for work carried out by Platini for FIFA between 1999 and 2002. Prince Ali said it was the sort of dark practice that had to be rooted out.

"In this day and age, to have an oral agreement is totally irresponsible," he said. "You have to be open, it has to be accountable. That's just a normal way of doing business."

The prince, a former FIFA vice-president, lost to Blatter in an election on May 30 but is standing again as corruption scandals -- including the Platini payment -- cripple football's governing body.

Thirty-nine football officials and sports business executives face US charges over more than $200 million of bribes for television and marketing deals.

"It would be a catastrophe for the organisation if things do not go on the right way," he told reporters in London after unveiling a new manifesto.

"Having talked to national associations across the world, they recognise that this is an incredibly important moment for the future of the organisation.

"Everybody recognises that this is the last chance to get it right. We don't want the situation where one year or two years down the line, more scandals come out.

"But I'm determined that we save FIFA and do it from within. There are a lot of good people around the world who want a good, strong and solid FIFA, and I'm one of them."

Prince Ali's revised 23-page manifesto includes a limit of two, four-year terms for the president and full publication of the report by former US prosecutor Michael Garcia into bidding for the 2018 and 2022 World Cups.

He also wants to make FIFA's multi-billion dollar accounts public and end the practice of "awarding commercial contracts without bids or via a secretive process", as well as expanding the World Cup from 2026.

The prince said the World Cup bidding process has to be cleaned up after the shadow cast over the 2018 and 2022 tournaments.

He wants FIFA to hold a public vote, rather than the secret ballots in 2010 that awarded the 2018 tournament to Russia and the 2022 event to Qatar. Prince Ali says members should not be allowed to visit candidate countries prior to the vote.

Prince Ali received 73 of the 209 votes from FIFA's member associations in last year's election, which Blatter won before announcing he would step down four days later.

He would not disclose how many votes he has been promised this time. But he said he had "broad support from all the different regions in the world".

Prince Ali is president of the Jordan Football Association, which pits him against AFC chief Salman, who is from Bahrain.

Salman's manifesto contains a proposal to transform the presidency into a non-executive role, but Prince Ali vowed to be a "hands-on" leader.

"If you are the president of an organisation, you have to take responsiblity for that organisation," he explained. "I don't want this organisation to go to a new level of irresponsibility."

He added: "Something that I've learnt, unfortunately, in FIFA and the footballing world is that promises that are made beforehand are not often seen through. I want to be the catalyst to change that."