Barcelona: Barcelona captain Lionel Messi says Neymar remains determined to return to the club and the Argentine wants him to turn them into an all-conquering force again, adding that he does not believe they are good enough at the moment to win the Champions League.

Barca launched an offensive to bring the Brazilian back last year from Paris St Germain yet ultimately failed to agree a price with the Ligue 1 champions. But Messi says the 28-year-old Neymar is looking forward to coming back to the Catalans. 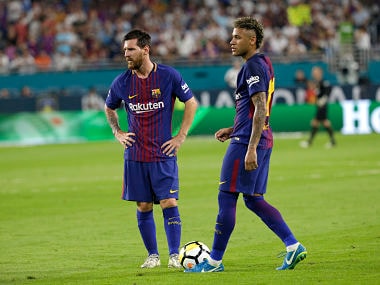 “He is very excited about returning, he has always shown that he regrets what happened. He did a lot to return and that could be the first step he took to try and come back,” the Argentine said in Spanish newspaper Mundo Deportivo on Thursday.

“Neymar has always been a top-level player and different to the rest. He is unpredictable, he takes players on and he scores lots of goals. On a sporting level Neymar is one of the best in the world and I’d love for him to come back.”

Neymar formed a mesmeric partnership with Messi and Luis Suarez for three seasons, including winning a remarkable treble in 2015.

But in the middle of the club’s pre-season tour of 2017, the Brazilian joined PSG for a world record fee of €222 million ($239.60 million), angering supporters and teammates.

“It’s normal that the fans felt that way because of how he left, and I was also upset about it at the time and we tried to convince him to not go,” Messi added.

Barca trail Real Madrid by one point in the title race, but Messi is more worried about their chances of winning the Champions League, which they have not lifted since 2015. They visit Serie A side Napoli in the last 16, first leg on Tuesday.

“This year us and Real Madrid have both been inconsistent in the title race but I think we’ll be fighting each other until the end of the season,” added Messi, who is Barca’s all-time top scorer and their most decorated player.

“But if we want to win the Champions League we have to keep growing a lot more as a team because I think right now in the shape we are in we will not be able to challenge for it.”