Bilbao: 'El Clasico sin argumentos' is how one supporter described it and for more than a century it largely has been, save the odd spat here and there. 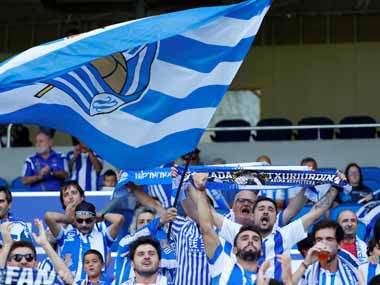 Athletic Bilbao and Real Sociedad first met in 1909 and the trajectories of two of Spain's most historic clubs have been interwoven ever since. They played again on Friday, Real Sociedad winning 3-1, thanks to some of the same players that have given extra spice to a rivalry traditionally defined by its good nature.

Within a mile of the new San Mames stadium, the streets were lined with striped shirts before kick-off, and not just the red and white kind, supposedly inherited from Southampton after one of Athletic's earliest members picked up a new kit before boarding his ship back to Spain.

But blue and white too, the fans of both teams spilling out of bars along the vibrant Poza street, where pintxos are as popular as beer and old photos of boxers and footballers are screwed into the walls inside.

As a band busks on the pavement, one supporter wearing red, pirouettes his girlfriend, wearing blue. Under a plume of Athletic red smoke, La Real fans clap and sing. Closer to the stadium, a young boy in red, is skipping, using his dad's blue scarf as a rope.

The Basque derby is one of football's most entrenched but its flavour feels unique. Some have said it is less a meeting of enemies, than of brothers that fall out once in a while.

Perhaps the enduring image came before a meeting in 1976, shortly after the death of Franco, when the teams' respective captains — Jose Angel Iribar from Athletic and Real Sociedad's Inaxio Kortabarria — walked out holding the 'Ikurrina', the Basque flag, which was still illegal according to laws of the dictatorship.

On the pitch, their peak was probably the 1980s when the league title stayed in Euskadi for four consecutive seasons between 1981 and 1984, with both clubs claiming two successes each. They have 10 between them in total. Neither have done it since, and maybe they will never again.

These days, their beating heart is tradition rather than trophies and each have plenty of that. Both were among La Liga's founding members and both retain an ethos that swims against the modern tide of flash foreign signings, instead trusting in local talent. For Athletic, the 'cantera' — only players with Basque connections — is official club policy.

But selecting from such a reduced pool has led to fall-outs, not least over the last 12 months. Inigo Martinez played more than 200 times for Real Sociedad but switched to Athletic last January when they triggered his 32 million euro release clause. He returned to Anoeta in May and was booed with his every touch.

By then, La Real had told fans they could swap any shirt with Martinez's name on the back. "Already he is history," read the announcement. The bitterness was mutual.

"I'm going to a big club," Martinez said, adding, "here at Athletic, it's not enough to finish mid-table." As well as Martinez, Athletic's line-up on Friday included defender Yuri Berchiche, who has played for the youth and first teams of both clubs, and Dani Garcia, who belonged to Real Sociedad for two years although never made an appearance.

There was tension too in the summer when Athletic made eyes for their rival's promising young forward Mikel Oyarzabal. All the more satisfying then for Real Sociedad's visiting fans, many of them dotted among the sea of red and white, that Oyarzabal scored twice, his two penalties proving the difference.

Satisfying too perhaps, that both Martinez and Berchiche were culpable for a goal each, the former giving away a penalty and the latter the ball in the build-up to Luca Sangalli's second. Athletic's Iker Muniain had equalised shortly before half-time but Real Sociedad were convincing winners by the finish.

After the final whistle, supporters in red and blue filed out together while Martinez below hugged his former team-mates. A rivalry, without arguments.