Los Angeles: Real Madrid midfielder Casemiro refused to be drawn on speculation the European champions are set to smash the world transfer record for 18-year-old Monaco sensation Kylian Mbappe, but insisted the Frenchman's arrival wouldn't spell the end for Cristiano Ronaldo at Madrid.

Madrid sports daily Marca reported on Tuesday that Real are set to beat a host of European rivals including Paris Saint-Germain and Manchester City with a bid of up to €180 million($210 million, £160 million) to snap up Mbappe, who starred as Monaco won Ligue 1 and reached the semi-finals of the Champions League last season.

"Mbappe is not a Real Madrid player so I can't speak about him," said Casemiro, who faced the media on Tuesday rather than coach Zinedine Zidane on the eve of Real's friendly clash against Manchester City in Los Angeles. 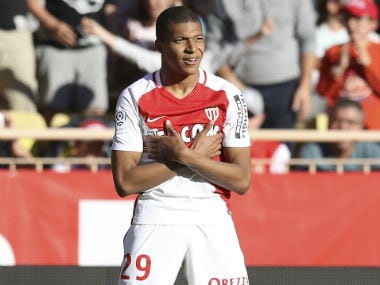 According to the Marca report, Real are set to pay between €150-160 million with add-ons of between €20-30 million for Mbappe, dwarfing the current world transfer record of €105 million Manchester United paid to lure Paul Pogba from Juventus last year.

Reports in the French press earlier claimed Zidane had told Mbappe one of Real's star 'BBC' front three of Ronaldo, Karim Benzema or Gareth Bale could be sold to ensure the teenager gets enough time on the field should he move to the Spanish capital.

Ronaldo has quashed rumours that he could be looking for an exit after being hit with tax fraud allegations by Spanish prosecutors for which he will have to attend court next week.

However, Casemiro believes Mbappe can co-exist with Ronaldo, Bale and Benzema.

"We know the quality he has, but we have the BBC who also do a lot of damage. The best players are here."

Ronaldo is not on tour with Real in the United States as he enjoys an extended break after captaining Portugal at the Confederations Cup and will not join up with the squad until 5 August on their return to Madrid before facing Ronaldo's former club Manchester United in the UEFA Super Cup just three days later in Skopje, Macedonia.

"We have Cristiano, the best player in the world," added Casemiro.

"We miss him, but we are waiting for him with open arms."