Comfortable win for India. Once again Ajay Thakur leads from the front. Few moments of concerns, but their strength in depth makes all the difference. Reddy replaces his underperforming troops with players on the bench and they worked

It has been a clinical performance by India in the first half of that opening game. After a rather sedate start in the first ten minutes, the Indian team switched gears to completely destabilise the Pakistan team to take a 13-point lead at half-time

Toss means little in Kabaddi. But Ajay Thakur wins it and chooses court. That is enough for the crowd to go berserk. Having chosen court, India will raid first in the second half

India has got off to a near-perfect start in the Kabaddi Masters Dubai 2018. Though Ajay Thakur and Co started cautiously, the Indian team upped the ante ten minutes into the game and from there it was a complete India show.

Pakistan raiders were all over the place and failed to create any sort of impact in the match. However, Pakistan can be proud of their defence as they managed to pull off one super tackle after another.

India have little to complain except for the form of Rahul Chaudhari who failed to make the most of the opportunity in a highly competitive squad. He needs to pick himself up immediately and considering the calibre of the raider, it might not be that difficult a task for the PKL Superstar.

Once again, it was Ajay Thakur who led from the front with a brilliant all-round display to ensure India lived up to the billing of being tournament favourites.

That's it from us here. Join us again on Saturday as India continue their campaign with the clash against Kenya at 8 pm IST

Comfortable win for India. Once again Ajay Thakur leads from the front. Few moments of concerns, but their strength in depth makes all the difference. Reddy replaces his underperforming troops with players on the bench and they worked

Rahul Chaudhari's miserable day continues as he succumbs to a super tackle from the Pakistan defenders.

India have slowed it down. They are taking time in their raids without risking a lot. Onus on Pakistan’s raiders to pick up the points. It is not their strength and it is playing in India’s hands

A super tackle there by Pakistan to knock Rohit Kumar off his feet, but India return the favour immediately with Ajay Thakur picking up his 2nd tackle point of the match

Ajay Thakur has been brilliant today and has rallied his resources in an expert fashion. Watching the Indian captain in action has been a wonderful sight.

India show their might again. Sandeep Narwal is sent on as India are short on numbers. He produces a brilliant tackle moments after a successful Ajay Thakur raid and India have recovered after the wobble

ALL OUT! Pakistan are cleaned up again, just after play resumes. At 25-9, this game may well be beyond Pakistan now

Srinivas Reddy briefing the team at half time 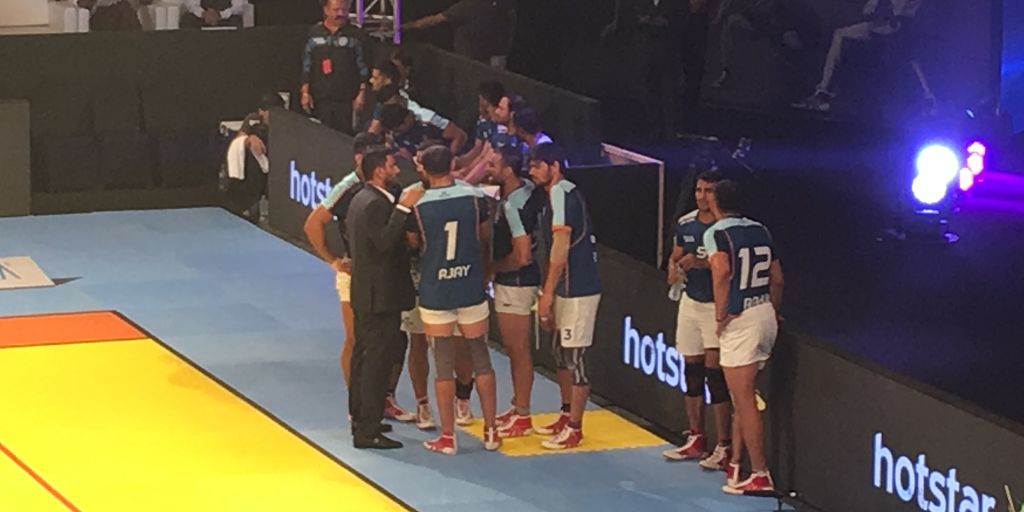 It has been a clinical performance by India in the first half of that opening game. After a rather sedate start in the first ten minutes, the Indian team switched gears to completely destabilise the Pakistan team to take a 13-point lead at half-time

Preview: Giants India will start firm favourites when they lock horns with arch-rivals Pakistan in the opening game of the inaugural six-nation 'Kabaddi Masters Dubai 2018'.

The tournament will provide an excellent opportunity for Asian countries India, Pakistan, Iran and Korea to get battle-ready for the Asian Games in Jakarta and Palembang, starting 18 August.

India are the defending champions and have won gold in every edition of the tournament since the sport was inducted in the main roster in the 1990 Asiad. "Asian Games will once again have Iran, Pakistan, and Korea among other teams and this tournament will be like a semi-final. It will be a good opportunity for preparation," India coach Srinivas Reddy said.

India are clubbed with Pakistan and newcomers Kenya in group A, while group B features Iran, Republic of Korea and Argentina with top two teams making the semi-finals.

'Flying raider' Ajay Thakur will lead India's challenge after returning at the helm at the expense of longstanding captain Anup Kumar.

Under Thakur, India beat Pakistan in successive matches en route to clinch the Asian Championship in Iran a year ago.

In Deepak Hooda, Manjeet Chhillar, Surender Nada and Girish Ernak, India also boast of top-class all-rounders and defenders to lend a perfect balance to the side.

The second match of the opening day will see 2016 World Cup finalists Iran take on the Republic of Korea.

Two-time Asian Games runners-up Iran will be favourites to top group B and would look to challenge heavyweights India down the line.

Iran have lost to India thrice in the final of the Kabaddi World Cup (2004, 2007 and 2016) and the six-nation meet will provide an excellent opportunity to reignite their rivalry.

All eyes would be on Argentina who are new to the sport and their president Ricardo Acuna said, "The introduction of kabaddi in Argentina has redefined sports participation. This will surely be a moment of reckoning for Argentina's kabaddi talent."