Johan Cruyff, one of the greatest footballers of all time who dazzled with his artistry, died Thursday at the age of 68 after losing a battle with lung cancer, prompting an avalanche of tributes from around the sports world.

Some of the sport's legends said the Dutchman -- who epitomised the all-out attack Total Football system -- was the best-ever player.

Cruyff "died peacefully in Barcelona, surrounded by his family after a hard-fought battle with cancer", said a statement on Cruyff's official website. 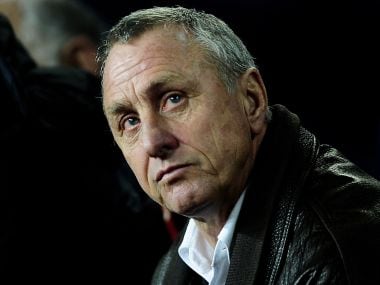 "It's with great sadness that we ask you to respect the family's privacy during their time of grief."

As a coach, Cruyff led Barcelona to their first European Cup title in 1992.

A one-time heavy smoker, Cruyff revealed in October last year that he had lung cancer.

He said in February that he had received "very positive" results however.

"Right now, I have the feeling that I am 2-0 up in the first half of a match that has not finished yet. But I am sure that I will end up winning," he added.

Cruyff was one of the all-time greats alongside Pele of Brazil, Diego Maradona of Argentina, France's Michel Platini and Lionel Messi of Argentina, Barcelona's current leader.

"He was the best player of all time," Platini told AFP. "I have lost a friend, the world has lost a great man. I admired him."

"Between two drags on his cigarettes, he always spoke of the young, coaching, and education through football," Platini, the UEFA president now suspended from football, added.

"We have lost a great man. May we carry on his example of excellence," Pele wrote on his Twitter account. "Johan Cruyff was a great player and coach. He leaves a very important legacy for our family of football."

"We will never forget you skinny," said Maradona in his tribute.

Franz Beckenbauer, who captained Germany when they beat the Netherlands in Cruyff's only World Cup final in 1974, said he was "shocked".

"He was not only a very good friend, but also a brother to me," added Beckenbauer, who went on to coach Germany to their 1990 World Cup triumph.

With his precision passes, speed, technique and goalscoring ability, Cruyff set new standards as a player.

He helped end an era of dour defensive football, inspiring the Dutch team in their Total Football offensive that took them to the 1974 World Cup final. Every player had to be ready to take on every position.

"Playing football is very simple, but playing simple football is the hardest thing there is," he once said.

Cruyff moved from Ajax Amsterdam to Barcelona in 1973 and stayed there until 1978. He returned 10 years later to coach the Spanish side.

His heavy smoking was blamed for heart bypass surgery in 1991 and he started sucking lollipops on the touchline at Barcelona games.

"Football has given me everything in life, tobacco almost took it all away" he said in a Catalan health department advert at the time.

He started as a coach with Ajax but on moving again to Barcelona they won four consecutive league titles and their first ever European Cup in 1992 at Wembley.

"He quickly became an icon for Barça," the club said in a statement which did not mention that he was sacked in 1995.

"Johan Cruyff painted the chapel, and Barcelona coaches since merely restore or improve it," one of his successors as a player and coach, Pep Guardiola, said of Cruyff.

Barcelona highlighted "his acrobatic strike against Atletico Madrid and the 5-0 win at the Santiago Bernabeu (against Real Madrid) in 1974, among many other great moments, will live long in the memory of Barca fans".

The club said fans could pay tribute to Cruyff from 08:00GMT on Saturday at the Camp Nou Stadium where a special condolence area would be set aside in the grandstand.

Cruyff was named Europe's player of the century in 1999 and the legend has lived on ever since.

"The '14' will never be the same. RIP Johan Cruyff," said modern-day Spanish hero Xabi Alonso, now with Bayern Munich, on Twitter in a tribute referring to Cruyff's number 14 shirt.

The Netherlands' football association said that Friday's international friendly against France in Amsterdam would pause in the 14th minute in honour of a player dubbed the "Rembrandt" of Dutch football.

At a number of international games on Thursday, a minute's silence was held in Cruyff's honour while a friendly between Feyenoord and Sparta in Rotterdam was halted in the 14th minute for a minute's applause.