Kolkata: Indian women's team pace spearhead Jhulan Goswami will be felicitated with awards to the tune of Rs 10 lakh at the Cricket Association of Bengal Annual Awards function on 8 August. 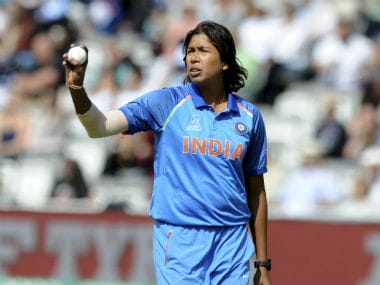 "The Chief Minister (Mamata Banerjee) will be coming and we will felicitate Jhulan in a big way," CAB president Sourav Ganguly told reporters.

"We are finalising the details but the cash awards will be in the tune of Rs 10," a top CAB official, who did not wish to be quoted told PTI on Thursday.

Jhulan and Co, who lost the World Cup final to England by nine runs, were on Thursday felicitated in New Delhi and the Bengal pacer will be touching base in the evening tomorrow.