Sunday, 24 September, will go down in the annals of Denmark’s sport as a red-letter day, as Tokyo threw up two Danish champions, exhibiting their wares within a few kilometres of each other. The durable 27-year-old Caroline Wozniacki winning the Pan Pacific tennis title, and the 23-year-old freshly crowned world badminton champion, Viktor Axelsen, celebrating his unbeaten status in his second Japan Open Superseries final. 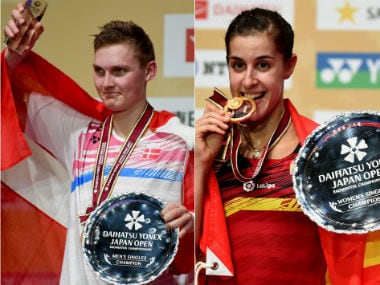 The gangling Axelsen, who ended runner-up to China’s Lin Dan in the 2015 edition of the event, used his height, reach and 12-year age advantage to the hilt over Malaysia’s soon-to-be-35, Lee Chong Wei, while handing the celebrated veteran a 21-14, 19-21, 21-14 hiding in an hour and a quarter, in the presence of a packed crowd at the Tokyo Metropolitan Gymnasium.

The 6 ft 4 in tall Dane, systematically wore the old-timer down, and should actually have won in two straight games, for he held a potentially match-winning 18-14 lead in the second game, after leading from start to finish in the opening stanza. Only an amazing last-ditch fightback by the Malaysian, who took seven of the final eight points with some positive, aggressive badminton, pushed the contest into a decider.

But that was the extent of Lee’s dominance in the match, which was replete with long, energy-sapping rallies, as smashes were easy to return and neither man could gain points by the short route. In such a battle of attrition, the younger man was bound to have the advantage

Axelsen barreled out into a 10-2 lead in the decider, which he enlarged to 16-7, with the writing appearing crystal-clear on the wall. Even the heartfelt chants of “Lee-Chong-Wei! Lee-Chong-Wei!” by a strong South-East Asian contingent in the crowd could not energise the skeletal-faced but paradoxically heavily muscled Lee, who played the rallies mechanically, with resignation write large on his face.

The decider could well have ended with the Malaysian remaining in single digits, but Axelsen did relax a bit, and Lee put in a final despairing gallop to reduce the margin of defeat. But there was no way the veteran defending champion could have added to his impressive satchel of six Japan Open titles in a total of nine appearances in the final over eleven years of participation.

With Japanese interest in the women’s singles having evaporated after the injury-induced withdrawal of world champion Nozomi Okuhara before the start of the semi-finals on Saturday, it was left to two-time former world champion and Olympic gold medalist, Carolina Marin of Spain, to bag the crown at the expense of He Bingjiao of China, with a 23-21, 21-12 triumph in 53 minutes.

The left-handed Bingjiao played a fine all-court game to match all the best moves of the Spanish southpaw, and would hardly have been flattered if she had pocketed the first game. After the two went neck-and-neck until 18-all, the Chinese No 6 seed got her foot into the door at 20-18.

But the obdurate Spaniard would not concede the final ace, and drew level, only to see He win a third game-point. Egging herself on with her trademark screams of self-encouragement – which she has admitted in an interview, that she uses to psyche her rivals, as much as to push herself on – the 25-year-old Marin took the crucial first game over the extra points.

The former world champion then simply floored the gas pedal, and zoomed to a 17-3 advantage in the second game as the Chinese girl, five years her junior, wilted in the face of a barrage of winners on both flanks. If at all He reached 12 in the game, it was through a clutch of untidy errors from the Spaniard as she tried to finish the game by the short route.

None of the finals of the three paired events provided the kind of entertainment the crowd has come to expect on the day the cheques and trophies are handed out. The world’s No 1 ranked pairing of Ayaka Takahashi and Misaki Matsutomo had the full measure of Koreans Kim Ha Na and Kong Hee Yong, to win by a 21-18, 21-16 scoreline, even though the match dragged on for four minutes under the hour mark.

The crack Indonesian combination of Marcus Fernaldi Gideon and Kevin Sanjaya Sukamuljo returned to the top after a temporary lull with a runaway 21-12, 21-15 triumph over local lads Takuto Inoue and Yuki Kaneko. So fast and aggressive were the third-seeded Indonesians, who had toppled Denmark’s Mathias Boe and Carsten Mogensen in the semi-finals, that the match was over in a minute under the half-hour.

The mixed doubles proved even more one-sided than the men’s doubles, with the Chinese duo of Wang Yilyu and Huang Dongping packed too many guns for the unranked Japanese, Takuro Hoki and Sayaka Hirota, who had come through the qualifying rounds to beat the Indian pairing of Pranaav Jerry Chopra and N Sikki Reddy in the penultimate round, and crash into the final.

Wang and Huang’s 21-13, 21-8 rout of the unconsidered Japanese pair meant that the host nation had to make do with just one title, with two of their three finalists biting the dust. In fact, no one single nation proved dominant in the $325,000 prize money competition, and the titles were evenly distributed, with Denmark, Spain, Japan, China and Indonesia taking home one crown each.