'It's been hell': Chris Cairns cleared of perjury charges over match-fixing

A British jury on Monday cleared former New Zealand cricket captain Chris Cairns of perjury charges over match-fixing and he said the trial has been "hell".

After a nine-week trial the jury of seven women and five men at Southwark Crown Court in London found Cairns, 45, not guilty of perjury and perverting the course of justice.

In an emotional statement outside court, Cairns said he had been through "hell" and would not be returning to cricket. 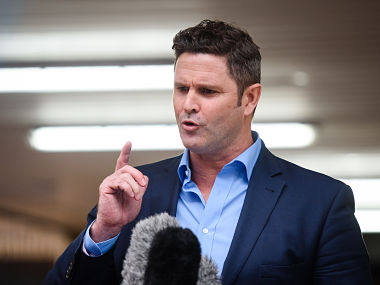 Chris Cairns speaks to the press after he was acquitted in the perjury trial. AFP

"It has not been a victory as such, because in a case like this there are no winners. It's been hell for everyone involved."

Asked if he would work in the sport again, he replied: "No, no, no."

He added: "It's my choice. I think it would be quite a hard environment to go back into. There has been a lot of damage done and I think that's unfortunate."

The cricketer fought back tears as he described the strain of being away from his family for nearly three months.

Charges were brought against Cairns after he sued Indian Premier League chairman Lalit Modi for libel in 2012 over a 2010 tweet in which the administrator accused him of match-fixing.

The retired all-rounder was said to have perverted the course of justice by trying to convince fellow cricketer Lou Vincent to provide a false witness statement.

After 10 hours of deliberations the jury was directed to acquit the lawyer by Mr Justice Sweeney in light of the cricketer's acquittal.

The pair stood to hear the verdicts with their arms crossed behind their backs, breathing audible sighs of relief as they heard they were cleared.

Cairns beamed and slapped his barrister friend on the back as they left the glass-panelled dock before joining his legal team at the back of the court.

The jury heard evidence from a host of former cricketers including Brendon McCullum and former Australia captain Ricky Ponting.

But Cairns repeatedly denied he was ever involved in match-fixing as he defended himself during the trial.

Cairns said he reacted with "horror" and "anger" when Modi accused him of match-fixing and he was "shocked" that McCullum could accuse him of trying to recruit him to fix results.

He told the court he discussed the topic of "spot-fixing" with McCullum in April 2008 in Calcutta and explained spread-betting to him because match-fixing was "topical" in India at the time.

Cairns said there was "minimal" time spent discussing match-fixing, and said it was "completely wrong" to suggest spread-betting was the equivalent to match fixing.