The referee blows the full time whistle and John Gregory's men have done a job on Bengaluru in their own backyard. A ruthlessly clinical performance from the visitors hands them their second title in 4 years. Chennaiyin players are ecstatic, Bengaluru are crestfallen. Great scenes at the Kanteerava.

GOAL! Raphael Augusto with fine finish. Jeje does well to hold the ball after failing to go behind the the defence, and lays it off for Augusto who curls it into the far post. Chennaiyin have been ruthlessly efficient and have one hand on the trophy

What a top half of football. It's been non-stop action in this first half. Bengaluru have edged the play in this one but find themselves behind after conceding 2 goals from as many corners to Mailson Alves. Albert Roca will be disappointed. All to play for in the second half.

GOAL! Mailson Alves again! The big center-half rises again and the Bengaluru defenders have no answer to it. There is nothing Gurpreet Singh Sandhu can do about it. Chennaiyin having trailed lead after 2 goals from set-pieces.

GOAL! Mailson Alves equalises for Chennaiyin from a corner. Chennaiyin once again show resilience. It's all square. What a start to the game!

GOAL! It's that man Sunil Chhetri again. And once again it's Udanta Singh who provides the assist. The winger gets behind the defence with his pace and sends a brilliant cross for Chhetri. The cross takes a deflection to perfectly fall in Chhetri's path who makes no mistake

That's it from us. I hope you have enjoyed our coverage of the Indian Super League. We will be back bringing you all the news of Indian football. Thank you for tuning in, good night!

Nice gesture from the Chennaiyin players to form a guard of honour for their beaten rivals. 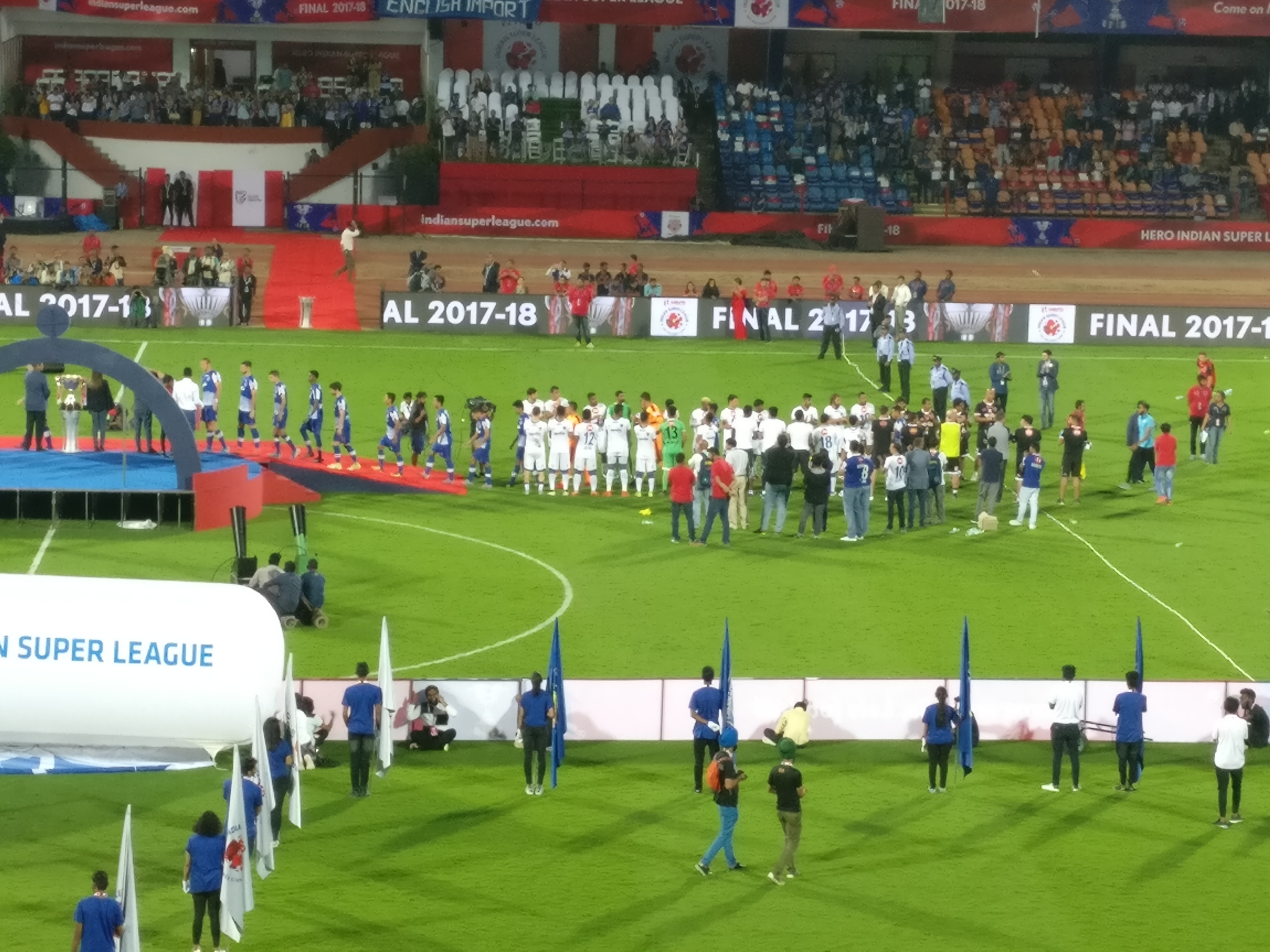 Unsurprisingly, the referee is given a coulorful welcome when he comes to take his memento.

Sunil Chhetri is awarded the Hero of the League award

Kerala Blasters' Lalruatthara is the Emerging player of the season

Gurpreet Singh Sandhu on Golden Glove: I think Subrata bhai deserved this award, he kept a lot of clean sheets.

Albert Roca on Bengaluru's loss: We are sad that we were not able to lift the trophy for the fans. It's a shame that we didn't win after playing so well. But it's ok and such things happen in football. It was not our day

Preview: Having dominated the competition in their debut season in the Indian Super League (ISL), Bengaluru FC face one last hurdle in Chennaiyin FC in the final in Bengaluru on Saturday.

Bengaluru were by far the strongest team during the league phase, winning 13 of their 18 matches to lead the table with 40 points, eight more than second placed Chennaiyin. They produced ample evidence of their form during the semi-finals, riding a hat-trick by skipper Sunil Chetri to thrash FC Pune City 3-1 in the second leg.

While Bengaluru dominated their opponents, Chhetri proved once again that he is one of the most consistent performers in Indian football.

Bengaluru fans will expect more of the same from their captain on Saturday.

In their short history of four years, Bengaluru have enjoyed unprecedented success.

They have won either the I-League or Federation Cup in every season and are overwhelming favourites to win the ISL title on debut.

"We started (our preparations) earlier than other teams because of the AFC Cup. We have tried to succeed. There is one more step to do right now but until now I am happy for everyone. The fans have always been behind us," Bengaluru FC coach Albert Roca said on Friday.

"Tomorrow is a big game against a very difficult team. Chennaiyin have shown a lot of quality. I am not expecting an easy game. It will be the most difficult game of the season," he added.

Significantly, Bengaluru FC are unbeaten in their last 10 matches, winning eight of them.

Chennaiyin FC will also fancy their chances, having defeated Bengaluru FC 2-1 at their own den during the league stage, thanks to a last-minute goal from Dhanpal Ganesh.

Against FC Goa in the semi-finals, Chennaiyin FC negated the threat of Goa's dangerous strike pair of Ferran Corominas and Manuel Lanzarote and will hope to do the same against Sunil Chhetri and Miku, who have combined to score 27 of Bengaluru's 38 goals.

"We are going into this game with a lot of confidence. We know that we have won there before, and we are not the only team (to defeat Bengaluru FC at home). We have utmost respect for everything they have achieved. We are Chennaiyin. We are not afraid of anyone," Chennaiyin coach John Gregory said during the pre-match media interaction.