Pune: Tuncay Sanli scored a headed winner in the 72nd minute to settle what was probably the most thrilling match of the Indian Super League so far -- with FC Pune City emerging 3-2 winners against Kerala Blasters at The Balewadi stadium.

The first minute, when Chris Dagnall crossed from the right for Blasters striker Mohammad Rafi to head in, was just a sign of things to come. 15 minutes later, Nicky Shorey, who ended the match with three assists, crossed for Kalu Uche as his header nestled into the corner of the net. Pune were level with that and started controlling proceedings, taking the lead just seven minutes after scoring the equaliser. 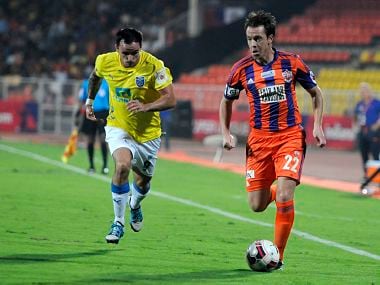 Pune built with patience in midfield before Shorey made his way up on the overlap, collected the ball in the final third and skipped past two challenges to lay on a perfect low ball for Uche in the box -- and the Nigerian gladly tapped in to give Pune a 2-1 lead.

Kerala were certainly down, but not out. Sandesh Jhingan headed just wide from a corner before making a world class last ditch tackle to stop Pune skipper Didier Zokora from creating a one-on-one chance as the visitors tried to contain the pressure just after conceding.

Kerala's leveller certainly came against the run of play, but was well deserved -- at least for Rafi, who rose the highest again when Josu sent in a lovely corner from the left. The ball struck the far post, bounced off the near post and trickled in as the Indian striker wheeled away to celebrate his fourth ISL goal this season.

Uche had two more chances in the first half -- one from a corner which he headed over and once from another beauty of a cross from Shorey, only to glance past the far post with Kerala keeper Stephen Bywater stranded.

Half-time probably came at the worst time for Pune, who were controlling proceedings all the while. At the start of the second half, and in fact for most of it, the visitors were the ones looking more dangerous. Dagnall drove a low shot inches from the post and Josu was in after Joao Coimbra's powerful run down the right channel, but he hit over.

Dagnall then threaded a clever pass for Rafi but the angle was too tight for the 33-year-old former India Player of the Year.

Pune threatened on the break occasionally but resorted to slowing down the game. They lacked pace down the wings with Jackichand Singh and Israil Gurung both oddly left out of the matchday squad altogether.

Fortunately for them, they had Shorey in supreme crossing form.

The former Reading left-back broke forward in the 72nd minute and crossed an early diagonal for Sanli to thump in with unstoppable pace into the back of the net.

After this, it was all about defending for the home team. Kerala, staring at a fourth defeat in a row, threw everything at Pune -- bringing on Antonio German, Sanchez Watt and Cavin Lobo in search of a point. But Pune had Gouramangi Singh, Roger Johnson and Zokora to protect their lead.

Goalkeeper Steven Simonsen had to make a couple of saves at the death, but the team saw off the danger as Pune made their way to the top of the table.