In late 2013, when Cesar Farias stepped down from Venezuela’s managerial post, he had firmly established the La Vinotinto on the South American football map within a span of a little less than six years. The 42-year-old is now committed to achieve something similar with NorthEast United FC in the Indian Super League.

The Highlanders have always been the quintessential underdogs of the Indian Super League, but have now pulled off a double over the reigning champions - Atletico de Kolkata – courtesy Farias’ tactical acumen. The Salt Lake Stadium in Kolkata was bursting with anticipation as the home side took the field, fresh off a morale-boosting victory over Mumbai City FC. It took Simao Sabrosa less than ten minutes to dampen the spirits of the crowd with a well-taken spot kick, after Ofentse Nato had brought down Carlos Lopez following a NorthEast United corner. 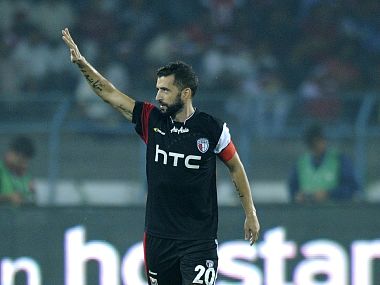 Farias, once dubbed the ‘Tropical Mourinho’ for his eccentricities on the touchline and penchant for solid defensive play, adopted a classic “park-the-bus” approach once NorthEast gained the early lead. He had set up his side in a 4-3-3 formation but once Sabrosa converted the penalty, Siam Hangal dropped down to help out the defence, essentially forming a five-man backline.

It wasn’t just the NorthEast United defenders who were on top of Atletico’s attacking unit – the likes of Silas and Bruno Herrero denied the Atletico central midfielders space to operate. Borja Fernades was particularly wasteful in possession, his and Jewel Raja’s partnership in the deep midfield being a mere shadow of the absolute dominance Nato and Borja had offered against Mumbai City.

Farias told FirstPost after the match that his gameplan was for the Highlanders to win the second balls in the midfield – a ploy which worked spectacularly in their favour. Antonio Habas’ team selection contributed to NorthEast United’s cause as the Spaniard had pushed Nato back into defense. The Botswana international looked completely out of depth against Nicolas Velez’s pace and directness.

Hume, Kolkata’s star player in the last game, was aggressively marked, with Andre Bikey and Carlos Lopez shutting down the Canadian’s movement between the channels. This was a game where Atletico needed Javi Lara’s technical ability and Arata Izumi’s poaching runs to unlock the compact NorthEast defence but in their absence, Jaime Gavilan failed to provide enough support to Hume.

Bikey and Lopez’s aerial prowess ensured the Highlanders were not caught out with long balls. Atletico resorted to shooting from distance to bypass the sea of black shirts but to no avail.

The fact that Atletico could register only two shots on target from within the 18-yard box speaks to NorthEast’s defensive masterclass and the Kolkata outfit’s woeful finishing in equal measures. Mohammad Rafique and Valdo were the only players who threatened Rehenesh’s goal. Rafique was a breath of fresh air on the right flank, the East Bengal midfielder taking on Yumnam Raju and belting in crosses into the danger zone.

Nicolas Velez could have inflicted further misery on Atletico, but the Argentine was far from clinical during NorthEast’s counter-attacks. It was a thoroughly professional performance from Farias’ men who perfectly executed their manager’s gameplan. As Farias very aptly put it, “Kolkata are the reigning champions, so anybody will be motivated to play against them. Gaining six points against them was not like a gift, it had to have some merit.”

Meanwhile, questions remain for Atletico and Habas, who was not happy with the penalty decision. “It was a rubbish penalty,” he said after the game. “The match today was about the referee and not us. Today it was us (at the receiving end) tomorrow it will be a new team facing it,”

More than halfway into the tournament, the Bengal Tigers are yet to find their best starting line-up or keep a clean sheet. Habas refused to speak about his teams’s chances of making the semi-finals - “I want to concentrate on the next game” - but unless things improve drastically, the defending champions will crash out of the tournament..