Kolkata Knight Riders (KKR) and Delhi Daredevils (DD) face off in Match 32 of Indian Premier League (IPL) 2017 at the Eden Gardens in Kolkata on Friday.

Gautam Gambhir named the Man of the Match for his brilliant 71 off 52 balls. And in a fantastic gesture, donates the prize money to the families of the CRPF personnel killed in the Sukma attack.

Gautam Gambhir takes back the Orange Cap. He is the highest run-getter in the tournament at the moment with 376 runs.

A four and a wide! That's all that it takes for Gambhir to bring up a comfortable seven-wicket win for the Knight Riders, who further consolidate their position at the top of the table with their seventh win of the tournament!

BOWLED EM! Rabada strikes for the second time in the innings, and once again smashes the stumps, angling the ball into Pandey and getting a deflection onto the wickets off his pad. Pandey was beaten for pacer here, with the delivery measuring 146 kmph.  KKR 139/3

FOUR! Now Gambhir gets to his half-century, and does so with a late cut towards the backward point boundary! Gets there in 39 balls! KKR 124/2

OUT! Gambhir tries setting off for a quick single, and Uthappa is caught well short of his ground at the other end, thanks to a brilliant direct hit! Finally brings the 2nd-wicket partnership to an end! Superb work by Karun Nair at backward point. KKR 117/2

SIX! Uthappa, who is in dream form at the moment, gets down on one knee and slogs the fourth ball of the 12th over with a slog down towards long-on! Brings up the 100-stand for the 2nd wicket in the process! KKR 113/1

FIFTY for Robin Uthappa, his second-consecutive and fourth of the ongoing tournament! He's in brilliant form at the moment, and certainly has made superb use of the second life handed to him after getting dropped earlier in the innings. Takes just 24 deliveries to get to the milestone in this innings, compared to 26 in his successful outing against RPS in the previous game. KKR 94/1

OUT! Superb catch by Woakes at deep backward point, as Morris perishes while looking to heave the full delivery outside off towards the off-side! DD 159/6

OUT! After surviving twice in the previous over, Anderson gets involved in a terrible mix-up this time, and is well short of the stumps at the striker's end. DD 146/5

OUT! Another lbw dismissal in NCN's first over of his second spell, this time removing Iyer just three short of his half-century! DD suddenly pegged back with two quick wickets, getting reduced to 140/4

OUT! Nathan Coulter-Nile returns to the attack in the 16th over, and starts off by trapping Pant lbw in the very first ball of his new spell! Bowled this one at 131 clicks, which perhaps was slower than what Pant expected as he geared up for a flick towards the leg side. DD 131/3

OUT! Umesh finally gets rid of Samson right after the latter smashes him for one of the biggest sixes at the Eden! Gets trapped plumb lbw to depart after bringing up a fine half-century. DD 123/2

SIX! Sanju Samson continues his fine form in the tournament by bringing up his second fifty-plus score of the tournament (his previous being a century), and does so in style with a pull towards the leg side for a big hit.

OUT! Sunil Narine finally delivers the first blow for KKR. Nair misses yet another attempted sweep, and gets hit on the back thigh, with the ball in the path towards the off-stump. KKR 48/1

Two changes in the side — Nathan Coulter-Nile comes in for Darren Bravo, while Sheldon Jackson comes in place of Piyush Chawla.

A comfortable win for Gautam Gambhir and his boys. They are looking unstoppable and have consolidated their position at the top of the table. Delhi continues to languish at the bottom. That brings us to the close of our live coverage of Match 32 of IPL 2017. But the evening is far from over. Don't forget to join us as we bring you all the live scores and updates from the second match of the evening. It's Kings XI Punjab and Sunrisers Hyderabad at Mohali. Punjab have a chance to move up to fourth with a win, while SRH can consolidate their place at No 3 if they can put it past Maxwell and Co.

'Clinical' is the word we use often to describe a #KKR win. It wasn't any different today. Well oiled unit. Good as gold. #KKRvDD #IPL

Gautam Gambhir named the Man of the Match for his brilliant 71 off 52 balls. And in a fantastic gesture, donates the prize money to the families of the CRPF personnel killed in the Sukma attack. 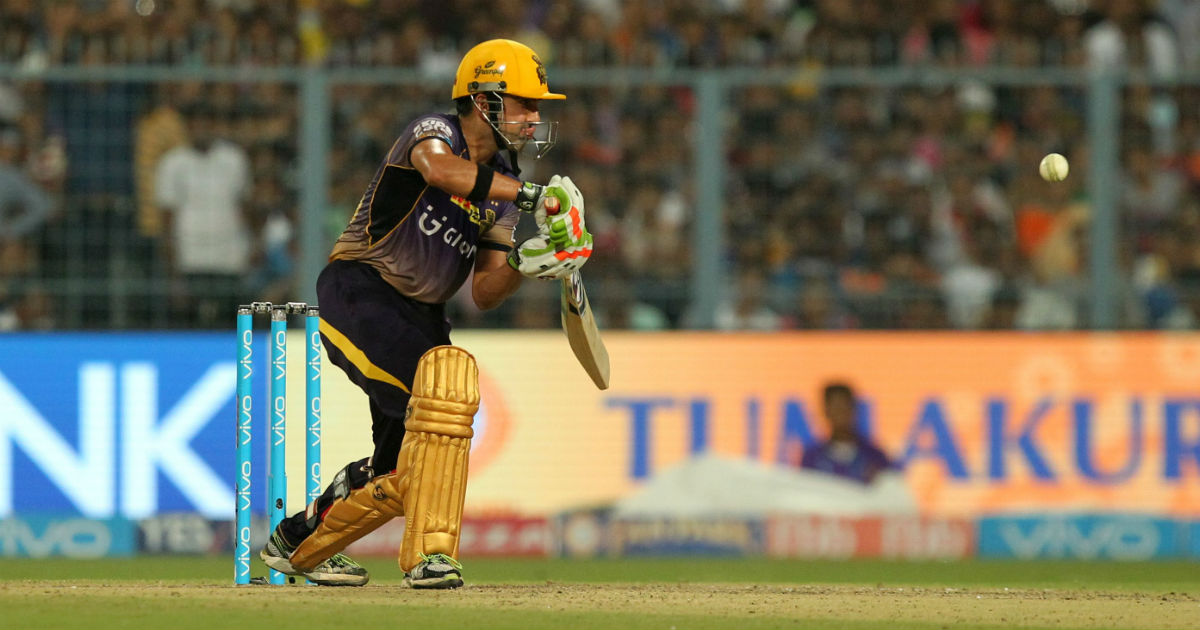 Gautam Gambhir takes back the Orange Cap. He is the highest run-getter in the tournament at the moment with 376 runs.

Clinical performance at Eden!#Gambhir and #Uthappa played their part perfectly as we continued our prime form in #IPL2017.#AmiKKR #KKRvDD pic.twitter.com/E83Bsbnjnt

That was an exhibition of power and form from #KKR. Not just @robbieuthappa but @GautamGambhir making a statement.

The purple brigade rolls on. Another comprehensive win for KKR. The good thing for them is that they are not only winning, but winning comfortably. And on the few occasions when they had to exert themselves in tight situations, they are doing it. Such is the depth of the squad that they can rotate their players and yet maintain their winning momentum, and what's more Shakib Al Hasan - one of the premier all-rounders in the world - is not even getting a look in. Uthappa may have benefited from a horrendous mix-up between the Delhi fielders but at the end of the day, credit has to be given where it is due. The way Uthappa tore the Delhi bowlers to shreds would make any opposition scared. And no praise is enough for Gautam Gambhir - the batsman and captain. If there is anything called leading by example, Gambhir has to be one of its greatest ambassadors. KKR is looking, in every way, top draw.

Preview: Delhi Daredevils will have to play out of their skins to try and stop the Kolkata Knight Riders (KKR) juggernaut when the two sides lock horns in an Indian Premier League (IPL) game here at the Eden Gardens on Friday.

KKR have been in sublime form, winning two back-to-back games in convincing fashion. "I thought we are a good chasing side and we are confident of chasing anything. Restricting the opposition to 180 was terrific and the credit needs to go to the bowlers," said Gambhir after the Pune game as his side registered their sixth win out of eight games in this year's IPL.

Gambhir has been in terrific form, scoring 305 runs in eight matches so far with an average of 50.83. The southpaw has the Orange Cap, given to highest scorer in the tournament, and is happy to be able to contribute in the team's cause.

"It's good to keep contributing, I keep saying Orange Cap does not matter if you don't have points as a team. But it is good to score runs and when you are, score as much as you can," added Gambhir, who has played 224 Twenty20 innings from 228 matches so far.

Nathan Coulter-Nile, who bowled a fiery first spell at the Eden against RCB, was rested for the Pune game and the Australian quick is expected to be drafted back in the side against Delhi on a track which helps fast bowlers.

Sunil Narine seems to have blended well in the opening slot and is doing his job of hitting big in the Powerplay to good effect.

Coming to the visitors, the Zaheer Khan-led Delhi side have won just twice in their six matches.

In the last meeting of the two sides, KKR showed champions intent to wriggle out of a hole and script a four-wicket win at the Feroz Shah Kotla in Delhi. Chasing a modest 168, the men in purple were 21/3 but Manish Pandey and Yusuf Pathan bailed their team out wonderfully.

Delhi will have to improve their batting if they are to harbour any chances of making it to the playoffs. Barring Sanju Samson and England's Sam Billings, none of the batsmen have been consistent.

Samson's brilliant century against Rising Pune Supergiant was the highlight and in the next game Billings' gritty 50 helped Delhi win two matches on the trot. But since then, the Rahul Dravid-coached side have lost three in a row.

Kagiso Rabada, Pat Cummins, Chris Morris, Zaheer and Amit Mishra make a good reading as far as their bowling is concerned and they would look to back their strength against KKR.

In the head-to-head count, Delhi have lost 11 and won eight of the 19 meetings so far against KKR.