FIFTY for Warner. His 3rd in four matches. Seven fours in his innings so far. Been in imperious form.

It's been a sparkling innings so far. 50 off 34 balls with six fours. He's played sensibly too.

Bhuvneshwar Kumar is named the Man of the Match for brilliant spell of 4/29. 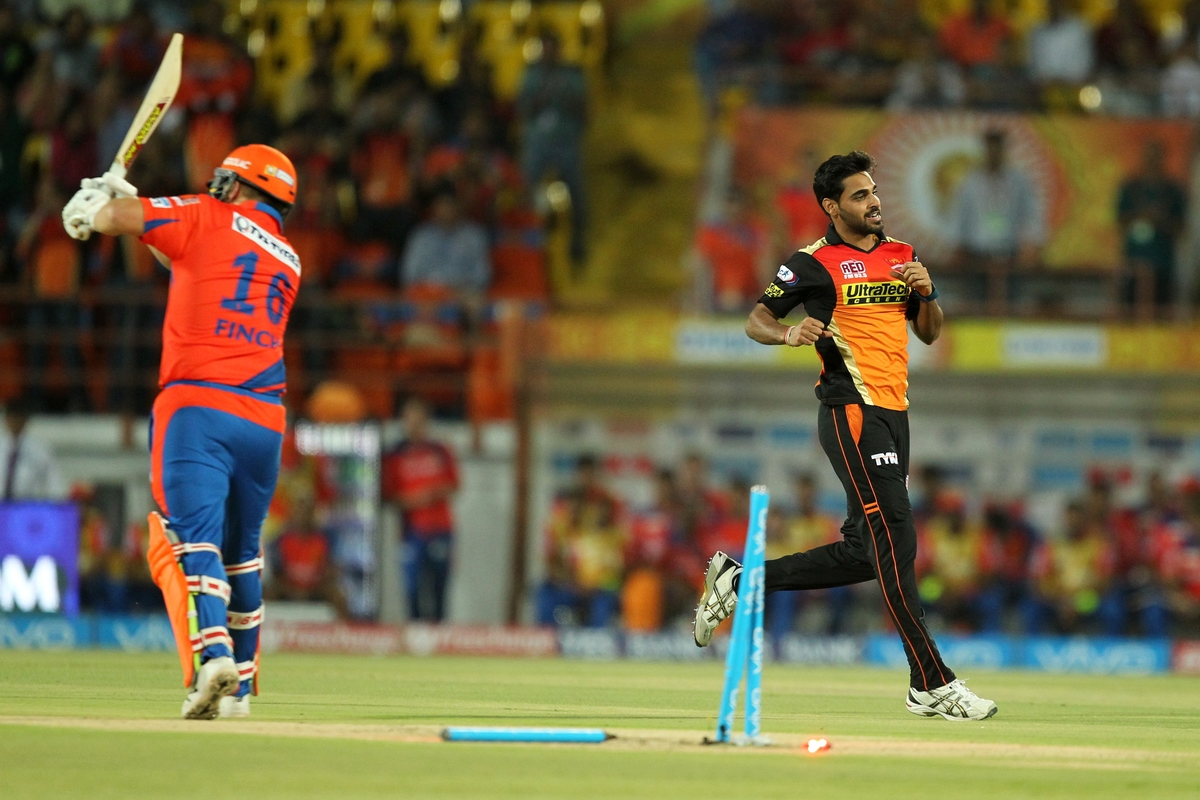 This IPL season is like TV Serial everyone knows what is going to happen still seeing everyday...

But credit must go the the SRH bowlers. Mustafizur had exceptional figures of 4-0-19-1. Lions were 74/2 in the 10th over and then SRH turned it around to restrict them to 135. Bhuvneshwar finished with four wickets which included 3 in the last over. All in all a good all-round performance to hand first loss of IPL 9 to the Lions.

A stroll in the park for Warner and Dhawan. The best news for SRH would be that Dhawan is back in some sort of form, he wasn't at his fluent best but he made sure he stuck it out in the middle and carved out a fifty. Warner looked flawless throughout and has mastered the art of pacing the innings.

Dhawan upping the ante. They want to finish this off early. Warner at first pulls a googly through mid-wicket for four off Tambe. They take four singles off the Jadeja over and then Dhawan takes on Bravo with a paddle sweep and a heave through mid-wicket for consecutive fours. 26 runs off the last three overs. 24 needed off 48 now.

If Dhawan crosses the 30-run mark, #GL seriously needs to think about their bowling line-up! #GLvSRH

Things have calmed down and it's sensible batting from Warner and Dhawan. Tambe is brought into the attack but the openers garner 7 runs in the over pretty easily. They then get five singles and a wide off the Raina over before Dhawan gets his second four of the innings with a flick to fine leg off a poor ball on the pads by Bravo. Dhawan is taking his time which is good, the run rate is brilliant and he should take this chance to spend as much time in middle as possible. 23 runs off the last 3 overs.

FIFTY for Warner. His 3rd in four matches. Seven fours in his innings so far. Been in imperious form.

Preview: Sunrisers Hyderabad will aim to end Gujarat Lions' three-match winning streak when they face-off in an Indian Premier League (IPL) encounter at the Saurashtra Cricket Association Stadium on Thursday.

Hyderabad snapped their opening two-match loss -- to Royal Challengers Bengaluru and Kolkata Knight Riders -- with a seven-wicket thumping of Mumbai Indians on Monday and against hosts Gujarat, they will face a strong challenge.

Gujarat are currently second in the points table with three consecutive wins and they will throw everything in their bid to extend the winning run. Gujarat, captained by Suresh Raina, have been guided by the heroics of Australian opening batsman Aaron Finch. The right-hander will be Hyderabad's biggest danger as he has scores of 74, 50 and 67 not out respectively in the three matches so far.

However, his opening partner, retired New Zealand captain Brendon McCullum hasn't really fire yet, barring a 49 against Pune, while Raina has failed to convert starts of 20s and 30s into big ones. It could be a crucial game for McCullum as West Indian Dwayne Smith is waiting for his chance.

Other batsmen in the team are wicket-keeper Dinesh Karthick and all-rounders Dwayne Bravo and James Faulkner. The return of local star Ravindra Jadeja is yet to be confirmed as the all-rounder got married recently.

Gujarat's bowling is also strong and has delivered keeping its reputations in tact. Medium pacers Praveen Kumar, Dhawal Kulkarni, Bravo and Faulkner has been complemented well by spinners in the form of Shadab Jakati and Praveen Tambe.

They also have ace pacer Dale Steyn in their ranks and it will be interesting when Raina plays the South African.

In the other camp, Indian opening batsman Shikhar Dhawan's poor run has bee a worry for Hyderabad. The left-hander has scored 16 runs in the three games so far and Hyderabad definitely need him to end hid slump. He also had a poor World Twenty20 during which he scored 43 runs in four outing before being dropped for the semi-final against eventual champions West Indies.

Captain David Warner has looked in very good touch with scores 90 and 58 in the three matches and the Australian's performance is key to Hyderabad's success.

The middle order batsmen Eoin Morgan and Moises Henriques need to raise their game, while the performance of Deepak Hooda and Naman Ojha will be crucial against the tricky death-overs specialists Bravo and Kumar.

Hyderabad have missed the experience and all-round capability of Yuvraj Singh, who is nursing an injury, as did New Zealand batsman Kane Williamson.

In the bowling department, however, Bhuvneshwar Kumar and Bangladeshi left-armer Mustafizur Rahman have ensured that Hyderabad don't miss veteran Ashish Nehra, who injured his groin during the opening game against RCB on April 12.

Spinners Bipul Sharma and Karn Sharma will face a big task in containing Gujarat batsmen, along with the medium pace of Barinder Sran and Henriques.

IPL 2020: Sunrisers Hyderabad Factbox, a side consistently making an impression

Here are the fixtures for Sunrisers Hyderabad ahead of IPL 2020