Gujarat Lions will look to bounce back from their heaviest defeat this season as they take on Kolkata Knight Riders (KKR) in the Indian Premier League (IPL) game in Kanpur on Thursday.

That's it, Gujarat Lions reach the target in just 13.3 overs, win by 6-wickets. Excellent turn with the ball by Smith four wickets, but a golden duck with the bat. Raina and Finch carried the chase and the skipper and a new father went on the hit a half-century.

OUT! Finch is run out on 26. Massive mix-up. Raina and Finch run a couple without breaking a sweat, the third one was there for the taking as well, but then the two collided mid-way breaking Finch's run and running him out. It seemed Raina was drawn to him like metal to magnet as Finch ran wide to avoid his partner.

OUT! Karthik is bowled by Morkel on 12. Karthik played a peach of a shot just the previous ball, a classy punch off the backfoot through the covers. Morkel responds in kind and equal class. The ball slips through the huge gap between bat and body and takes out the timber. Aaron Finch the new man in.

OUT! McCullum departs on 6. Baz hit a six early on but Narine got the better of him. The ball drifted through the air, cuts in and B-Mac is plumb LBW. Not an ideal start for Gujarat Lions, openers back in the pavilion. Time for Raina to step up.

OUT! On the very first ball of the innings! Smith had success with the ball, not so much with the bat. Golden duck. A shortish delivery from Rajpoot, SMith swings away and gets an edge, Uthappa does his best to make a mess of it and holds on to the ball after a juggling act.

KKR manage 124/8 from 20 overs, not enough considering IPL standards. Smith did all the damage today. 4-0-8-4 on the night. KKR need a similar performance from their ranks to have a chance at this one.

OUT! Holder departs on 13, Bravo does the champion dance and smiles as he sends off Holder. Holder doesn't hit it quite well and sends it high up over the bowler's head. Finch runs in from mid off and takes the catch, not too far from the non-striker's stumps.

OUT! Yusuf Pathan is gone after making 36. That was a soft and sluggish dismissal. Full toss outside off, and Pathan lunges to send it straight to Raina at extra cover. Just one more over left for KKR to make this competitive.

SIX & OUT! Suryakumar Yadav departs on 17. He hits Jakati for an inside-out six and just the next ball he goes for a sweep and gets a top edge. Kulkarni takes a simple catch at fine leg. Jaosn Holder the new man in.

OUT! Shakib is sent packing on 3, Smith's on fire, he gets his fourth wicket on the night. Short ball did the trick, Shakib tried to play the upper cut, and found Dwivedi at third man. Onus now on big-man Pathan.

OUT! Bowled! Smith makes a mess of Chawla's stumps. The left-hander was left befuddled by a straight roller. The ball seemed to skid and come in fast and hit high on the timber. Smith claims his third on the night.

OUT! Uthappa is gone on 25, he was looking dangerous. Smith strikes again. A tempting short-ish ball in the gallery and Uthappa slashes at it, gets an edge and Karthik makes no mistake behind the stumps. KKR in a bit of a spot now. And remember, no Andre Russell tonight.

OUT! Manish Pandey doesn't last long. He chases a full and wide one from Smith, but only gets enough bat on it to send it to Raina in the slips. Pandey departs after making a solitary run. Piyush Chawla has been promoted up.

OUT! No more freebies for Gambhir, he is run out excellently by Jakati on 8. Jakati dove to collect and caught Gambhir in the middle of the pitch with a direct hit. Uthappa had knocked it to mid on, and slipped and fell as he ran towards the non-striker's end. Jakati was quick to get his hands on the ball and even quicker to throw at the stumps as Gambhir lost a crucial second in confusion due to Uthappa's fall. You've lived out your lives, Gautam.

Smith named man of the match for his 4/8 on the night. 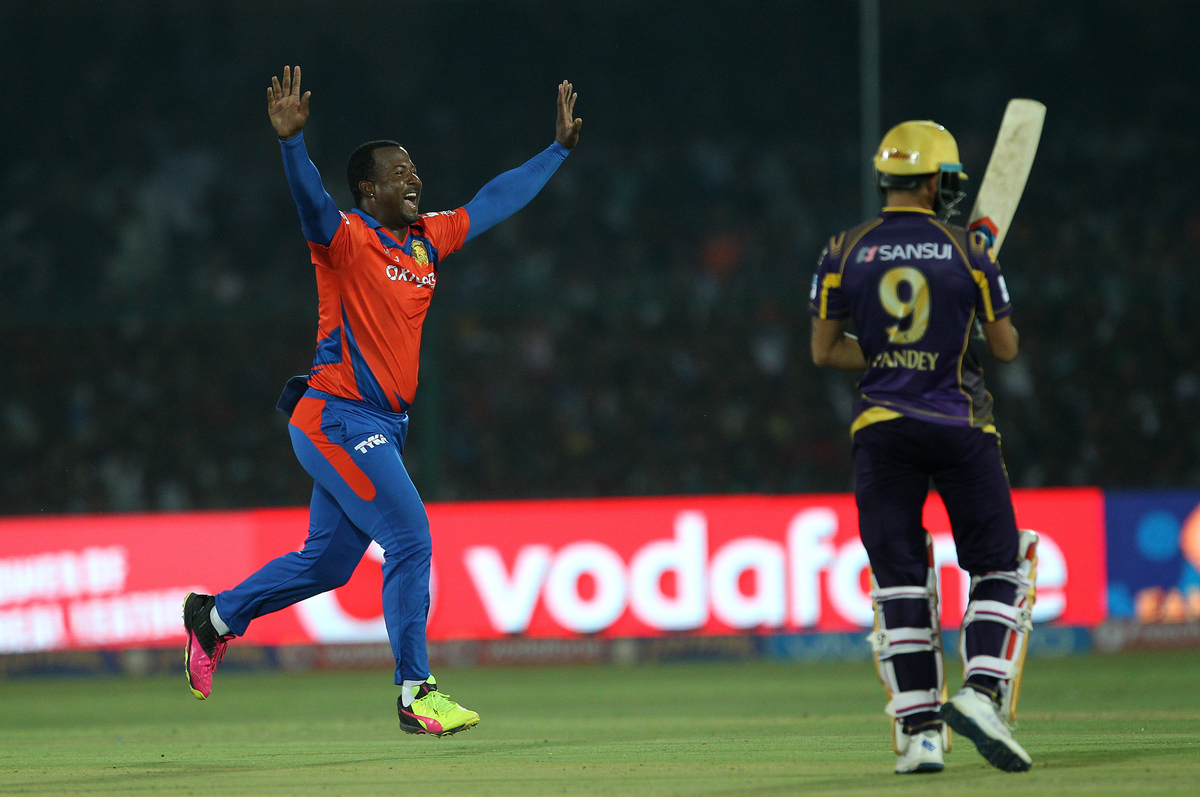 That's it, Gujarat Lions reach the target in just 13.3 overs, win by 6-wickets. Excellent turn with the ball by Smith four wickets, but a golden duck with the bat. Raina and Finch carried the chase and the skipper and a new father went on the hit a half-century.

Raina-esque. Excellent. Raina gets down on one knee, and drives over mid-off, how many times have we seen him do this. It's just as beautiful evrytime. He brings up his 50 with that beauty. 52 off 33, 7 fours and a six.

Raina lets it out on Holder and hits back-to-back fours. Two short balls, Raina pulls both of them to square leg and then midwicket. Raina has finally learnt to play a short ball. Need 18 runs off 54.

OUT! Finch is run out on 26. Massive mix-up. Raina and Finch run a couple without breaking a sweat, the third one was there for the taking as well, but then the two collided mid-way breaking Finch's run and running him out. It seemed Raina was drawn to him like metal to magnet as Finch ran wide to avoid his partner.

The Lions cruising here. Raina and Finch just a run away from a 50-partnership. And it has been brisk. Just 38 needed from 11 overs. GL are heading for an easy win.

Very expensive over. 5 wides and then a four. Raina gets lucky and finds an edge on 145kmph ball, it races to third man. 16 runs off the over. GL going steadily now.

Kanpur: Gujarat Lions will look to bounce back from their heaviest defeat this season as they take on Kolkata Knight Riders (KKR) in the Indian Premier League (IPL) game in Kanpur on Thursday.

Regular captain Suresh Raina will be back for the tie at the Green Park stadium to boost the team's confidence after skipping the Royal Challengers Bangalore match to be alongside his pregnant wife who gave birth to a daughter recently. It was Raina's first IPL match missed since 2008.

On the contrary the Knight’s may have to go into this game without their star all rounder Andre Russell who suffered a hamstring pull in the last game.

KKR have 7 wins from 12 outings so far and if they grab all two points against Gujarat they will be almost sure of a play-off spot. The Lions also have as many wins as KKR but they have a lesser net run-rate. Both teams come into the encounter after being battered by the Royal Challengers Bangalore (RCB). First it was the Lions who faced the wrath of the Virat Kohli led side suffering a humiliating 144-run defeat last Saturday.

Twin centuries from Kohli and AB de Villiers helped their side reach a mammoth 248/3 and then RCB bowled Gujarat out for a paltry 104. KKR were then handed a 9-wicket thrashing.

Gujarat know they have to pull up their socks in the next tie. Raina’s return can be a boon for the home side as he has been prolific over the last nine seasons of the league.

And if the likes of Brendon Mccullum, Dwayne Smith and Aaron Finch fire, the rival bowlers will have a tough time.

The last time these two sides had met at the Eden Gardens, the Lions had come out on top and it will be interesting to see what Gautam Gambhir will do to turn the tables this time around.

The home side might look to get in Dale Steyn and James Faulkner in the side to strengthen their bowling. The wily fast bowlers might prove to be handy against the in form KKR batsmen.

The Knights have suffered problems in their top order but they have been able to put healthy totals on the board frequently.

They will want middle order batsman Yusuf Pathan to fire if they are to score heavily. However, the void left by Russell may be difficult to fill.

Spinners have been the main weapon of the Knights this season but the Green Park strip may not offer much to the likes of Piyush Chawla and Sunil Narine.