Glasgow: The Indian women's table tennis team, runners-up in Delhi four years ago, failed to win a medal at the Glasgow Commonwealth Games after losing the bronze play-off to Australia at the Scotstoun Sports Campus.

23-year-old Ziyu Zhang starred for Australia by winning her two singles, against the experienced Shamini Kumaresan and Madhurika Patkar respectively. Zhang came back to win in the fourth rubber against Patkar helped Australia seal the tie 3-1.

Patkar, leading 6-2 in the fifth and deciding game, looked set to take the best of five play-off down to the wire. However, it wasn't to be as a combination of defensive approach and unforced errors led to her downfall. She eventually went down 9-11 11-5 11-8 8-11 9-11. 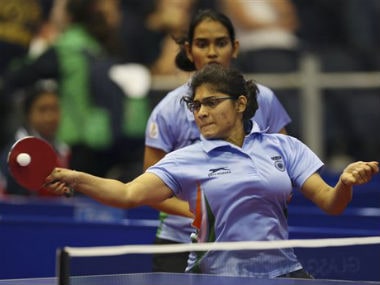 Patkar and Kumaresan had lost the preceding doubles rubber against Jian Fang Lay and Miao Miao to trail 1-2 in the match. Zhang gave Australia the early advantage by packing off Kumaresan 11-5 2-11 11-6 11-9 in the opening singles. The chubby-looking Chinese-born paddler used her expansive forehand to good effect and was equally potent with her backhand.

For India, the long bright spot was Manika Batra's convincing win over Fang Lay, an opponent more than double the Delhi girl's age. The 19-year-old foxed the 41-year-old Australian with smart use of pimples for a 11-5 8-11 11-8 11-7 win.

Indian women had won their maiden Commonwealth Games silver in Delhi four years ago. They entered the bronze medal match here after going down to the mighty Singapore in the semifinals.

The men's team, led by Sharath Kamal, takes on England in the semifinals later today. India blanked hosts Scotland 3-0 in the quarterfinals yesterday. Holders Singapore face Nigeria in the other semifinal.