If there has been a team that has underachieved in the Indian Super League (ISL), it has to be NorthEast United FC. The John Abraham-owned side finished at the bottom of the table in the inaugural season and last year it missed the semi-final by a whisker. That, however, is unfortunate considering that the team is based in a part of the country which is crazy about football and has produced many top quality players over the years.

This year, the side looks to turn its fortunes around, and here are the players who can do it for them:

Lallianzuala Chhangte: The 19-year-old is highly rated and is a product of Liverpool's youth academy in India. He started his career with DSK Shivajians-Liverpool International Football Academy based in Pune. He finished his team's debut season in the 2014 U-19 I-League as the top scorer with 16 goals. 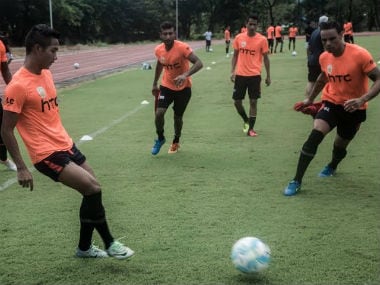 Not surprisingly, he received a senior call up in December 2015 and became the second youngest to represent the nation. Not only that, on his debut against Nepal in the SAFF Championship, the Mizo youngster scored two goals, breaking Baichung Bhutia’s 20-year-old record.

Chhangte is a very impressive player, and it comes as no surprise that NorthEast were keen to utilise that talent. The Highlanders also signed Chhangte's DSK teammate Jerry Mawihmingthanga, who has done equally well and has been rewarded with an India call up.

Despite being just 19, Chhangte should get enough minutes for the side, and will help him make a lasting impression. He can operate as a forward or on the flanks. It will be his responsibility to support Nico Velez and share the weight of scoring goals to ensure NorthEast progress beyond the league stage. He has a bright future, and a season with the Highlanders might be a crucial step towards reaching great heights.

Rehenesh TP: Despite NorthEast United finishing at the bottom of the table in the opening season, their 21-year-old goalkeeper Rehenesh proved to be a pillar of the side, conceding only 13 goals - the joint second least - in the tournament. The Calicut-born player had five clean sheets to his name as well in the first season of the ISL. He finished the second season with four clean sheets, only behind Apoula Edel. The 23-year-old has demonstrated incredible composure and ability and should aim for another solid season. He will face competition from NorthEast’s new recruit - the veteran Subrata Pal. If he can keep Pal from getting in the team, it will be an achievement in itself.

Subrata Pal: While Rehenesh should ideally be the first choice for coach Nico Vinganda, signing Subrata Pal from Mumbai did raise a few questions. Obviously having two top goalkeepers is a boost for any team, and the former Mumbai City player adds some much-needed experience to the side. The Arjuna award winner will have to face competition from the supremely talented Rehenesh, but Pal is a classy player, not oblivious to challenges.

A product of the renowned Tata Football Academy, Pal had established himself as a first-team regular for Mohan Bagan despite being only 18. Now 29, he is at the ideal age for goalkeepers, who tend to peak late. In the end, Pal might start the season as the first-choice keeper. Simultaneously, it isn’t necessarily on the pitch where Pal will add value to the NorthEast United squad. He will provide vital experience off it too.

Nico Velez: The Argentine joined last year and proved to be a valuable player for the franchise, scoring five goals, which made him the side’s top scorer. He is a natural goalscorer, and his instincts are visible on the pitch. It made sense for the Highlanders to retain his services.

In his second season of the ISL, Velez will look to do as well, if not better, than his first season.

He will get support from Chhangte and Katsumi Yusa. Yusa is accustomed to the conditions in India having played the last three seasons with Mohun Bagan.

Velez will have a lot of responsibility this season, and he needs to regularly get among the goals for NorthEast to have any chance of progressing through to the semi-finals.

Didier Zokora: NorthEast United signed Didier Zokora as their marquee player for the season. Zokora played the last season with FC Pune. The holding midfielder made more than 130 appearances for Tottenham Hotspur and, like Pal, adds valuable experience to the side which will prove to be beneficial for the primarily young squad. Zokora is the most capped Ivory Coast international and his experience, expertise and leadership qualities will be advantageous for NorthEast.