Kolkata: For Indian football to develop, the stress should be on creating an environment where players do not just enjoy the sport but are well aware of their tactical positioning, feels Spanish midfielder Jofre Mateu Gonzalez. 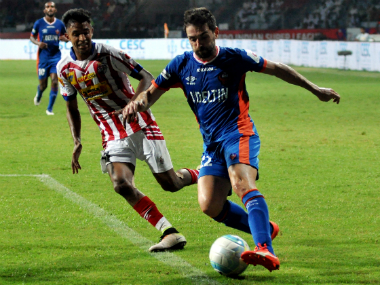 In an interview to IANS, the FC Goa footballer who robbed Atletico de Kolkata (ATK) of a win by winning and converting a late penalty here on Sunday, said: "You need to have academies where children grow in a football environment."

"It's not only about practising and enjoying the game, but knowing a lot about being part of a team, a lot of skills and tactical issues which you must know in your (playing) position," Jofre added.

Like many who have pointed out in the past that one of the major obstacles in the development of Indian football is children taking up the sport late, Jofre said they should do so when they are 5-6 years old.

"Starting from (a) young (age) is the point where Indian football can grow. You need children playing football when they are 5-6 years old," the 36-year old former Barcelona, Levante and Espanyol player said.

On his assessment of Indian footballers over the three years he has spent playing in the country -- Jofre was with ATK in 2014 -- the product of La Masia, Barcelona's famed youth academy, said: "For some you can see the difference between first (ISL edition) and now, and the new ones are not only players of the team but important ones too."

"So it's very good for the league and for the country. And my mates (Indian players at FC Goa), you can see they are improving every year."

Jofre, who has played over 300 games in the second division of the Spanish League, pointed out the importance of off-field activities like nutrition and rest, which are as important as the on-field development.

"Like taking care of nutrition, recovery, rest and all those small things. So it's not only the performances but all other things which the ISL has brought in making them (Indian players) more professional."

Turning to the European scene, Jofre, part of the 1997-98 La Liga winning Barca team that had the likes of Pep Guardiola and Luis Enrique, Jofre said both Guardiola (coach of Manchester City) and Enrique (coach of Barcelona) are doing well within their respective setups.

"You can see in such a short time how important a coach can be.

"He (Guardiola) is changing a lot. I was pretty sure while watching the team (Manchester City) last season in the semi-final (against Real Madrid) that they have big players but not a big team.

"I was pretty sure that with those players Guardiola is going to make a big job, and you can see now how they are playing. He is already showing everywhere how important it is to prioritise over greed (of players) and many other things and translate it into a team performance. Pep understands the game so well," Jofre said.

Manchester City got off to a flying start under Guardiola after a below par show last season which saw the end of manager Manuel Pellegrini's tenure. City won six English Premier League matches on the trot before losing to Tottenham Hotspur.

World football giants Barcelona, on the other hand, had a relatively sedate start, losing two matches out of eight already.

But Jofre feels with the new acquisitions this season, the Catalans are going to win a lot of trophies.

"He is doing a very big job in the team. This season Arda Turan is starting well with (Pablo) Alcacer, Denis Suarez, (Samuel) Umtiti. The signings are very good. I am expecting a lot of trophies for Barcelona this season," he said.

Jofre also feels that Barcelona are a strong side with or without superstar Lionel Messi whose contract with the club expires in June, 2018, and there have been rumours of the Argentine jumping ship.

"I think they have a big chance of winning the La Liga, with or without Messi it's a big team."

Signing off, the Copa del Rey winner with Espanyol picked Valencia's Santi Mina, Espanyol's Marc Roca and Granada's Sergi Samper as the young players to watch out for this season.