IPL 2016, DD vs RCB, as it happened: Yet another Kohli fifty takes RCB into playoffs

It's all over. RCB win by 6 wickets, RCB reach playoffs at second place. This has been a yet another brilliant batting display from Virat Kohli.

OUT! Watson departs on 14, he doesn't get third time lucky. He slog sweeps it ot midwicket but Sam Billings was there to take the catch. Negi gets the wicket. 28 needed off 30 balls, with Kohli playing on 47, nearing yet another half-century

OUT! Rahul plays on to his stums and is gone on 38. It was a brilliant innings and Brathwaite brought an end to it. Rahul defended an outside off delivery and the ball bounced off the pitch and hit the stumps. Brathwaite celebrates as if he scroed a goal.

OUT! Big, big wicket! Ab de Villiers is caught out at short cover! The extra bounce from Zaheer got him, it was close to the body and ABD put up his bat to defend. The ball carried til Yadav at short cover and he dove to take a beautiful catch. It wasn't even half a chance. But he took it cleanly. Big boost to DD's defence.

OUT! Chris Gayle is out, he's played on to his stumps. Very ugly dismissal, and very sloppy from Gayle. Sometimes you get a hint that he only knows how to hit with the bat. But there are many other things required of the willow. The ball from Morris gets a bit of bounce and Gayle is dumbfounded, and undecided. He jumps and shows his bat, gets an edge and the ball goes on to his stumps.

Brilliant last over from Watson, just four runs given. DD have finished up at 138. They started off well, but regular dismissals halted the flow of runs.

OUT! De Kock has to walk, he's given out by the third umpire on 60. He pulled Chahal to long off and is caught by Jordan. It seemed Chahal's foot had landed on the line, not behind it and thus was a no ball. But third umpire thought different after the oin field umpired consulted. De Kock has cause to feel hard done by.

OUT! BIG WICKET! Carlos Brathwaite departs for 1, that's a jolt for DD. Watson takes an excellent catch as Gayle gets another wicket on the night. Full, outside off, squeezed to Watson at point. Delhi are struggling here, they are bleeding wickets and the run are not coming fast enought. Chris Morris the new man in. Him and de Kock need to go berserk, and soon.  Just 5 overs left.

OUT! Negi goes on 6, and he took 12 balls to make it. He's been a disappointment, costliest Indian player. Makes room and goes inside out on Gayle but goes only as far as de Villiers at mid off.

He's anchored the Delhi innings well while wickets fell around him. Delhi seem to have taken their foot off the accelerator. Just 4 runs from that over.

OUT! Sam Billings departs on 4, excellent and unexpected catch from the big man Chris Gayle. Billings cut away a short one but Gayle dove to his right at point and held on to the ball.

OUT! Samson departs on 17, he was looking good. Didn't look to pleased with that decision. Chahal's ball turned wide and Samson chased it with his bat and seemed to miss it. Rahul was confident he heard a sound and it seems so was the umpire. Sam Billings comes as the new man in.

OUT! Nair walks back to his dug-out. Kohli takes a stunning catch running behind. Nair lofted it over mid off and it looked destined for the fence. Kohli was in no mood to give up and he chased it down to take the catch at long off. nair goes on 11, Chahal gets the wicket. Sanju Samson walks in to bat.

OUT! Rishabh Pant departs on 1, he is tempted by a slightly short, slightly wide ball in the channel, has a half-hearted go at it and gets an edge. KL Rahul gladly accepts the free gift.

"Havent really thought about my future, have really enjoyed being around youngsters and passing them all i've learnt over 18 or so years."

Zahher Khan, what a guy.

"It has been a wonderful campaign, we've played wonderful cricket and youngsters have learnt a lot" Zaheer

It's all over. RCB win by 6 wickets, RCB reach playoffs at second place. This has been a yet another brilliant batting display from Virat Kohli.

It's almost over. Just the 1 run needed off the last 2 overs.

Yet another 50 by Virat Kohli, it came off 40 balls (6 fours). Is there a bowler alive to stop him? This has almost become boring now. 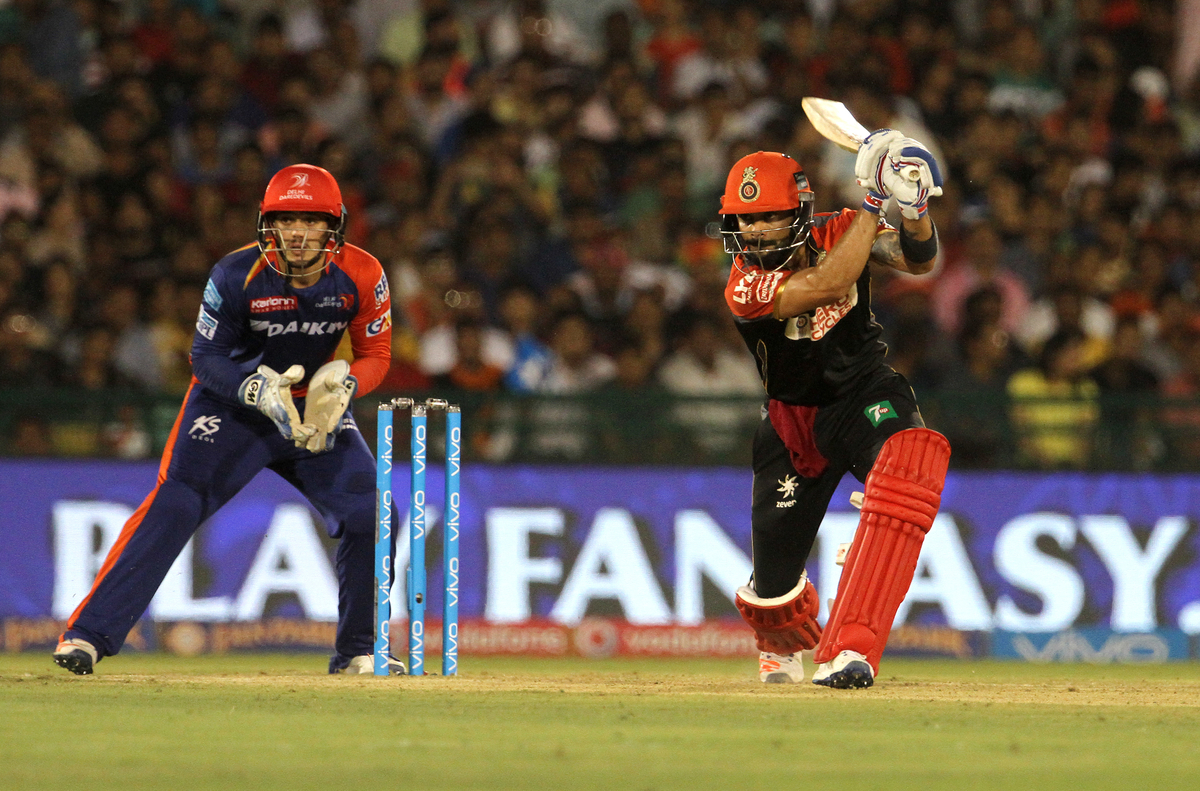 OUT! Watson departs on 14, he doesn't get third time lucky. He slog sweeps it ot midwicket but Sam Billings was there to take the catch. Negi gets the wicket. 28 needed off 30 balls, with Kohli playing on 47, nearing yet another half-century

Watson gets two lives in the space of 2 balls. Amit Mishra has been robbed off a wicket here. First the Aussie was plumb LBW, the ball, a googly, turned and hit his pads right in front of middle stump and then took off the swinging bat to give off the illusion that he'd hit it with his bat first. Bad call from the umpire. Next was hit towards long on and Yadav gets his hand son the ball at the edge of the rope but doesn't manage to hold on and the ball is parried away for six.

Brathwaite drifts down leg and Kohli accepts the invitation with both hands. He sends a wristy flick off his pads to square leg for four. DD still not close to denting RCB's chase. They need to get Kohli out to have a shot at this.

OUT! Rahul plays on to his stums and is gone on 38. It was a brilliant innings and Brathwaite brought an end to it. Rahul defended an outside off delivery and the ball bounced off the pitch and hit the stumps. Brathwaite celebrates as if he scroed a goal.

Yadav goes wide and Kohli waits for it, opens the face of his bat and sends the ball racing towards third man. Halfway through, RCB are cruising, they need just 56 off 60 balls.

Preview As the Indian Premier League (IPL) gears up for its business end, a confident Royal Challengers Bangalore (RCB) will lock horns with a rejuvenated Delhi Daredevils for a virtual knock-out clash in Raipur on Sunday.

On a roll after notching three consecutive wins, RCB are at the third spot with 14 points from 13 matches while Delhi have as many points but are placed sixth in the table, lagging behind the Virat Kohli-led side only in net run-rate. Two-time champions Kolkata Knight Riders (KKR) and Mumbai Indians too have 14 points each with just one match to go in their league stage.

Going into Sunday's encounter, it will be a battle between RCB's strong batting line-up, consisting of the dangerous trio of Kohli, Chris Gayle and AB de Villiers and Delhi's bowling led by the seasoned Zaheer Khan and Amit Mishra.

Bangalore will once again bank on their skipper, who has turned into an epitome of consistency with the willow. The Delhi right-hander has not only smashed four tons to score 865 runs from 13 matches this edition but also surpassed Suresh Raina to be the highest run-getter in the lucrative tournament.

Kohli, who defied a split webbing to notch his fourth century of the IPL, has lately found support from his opening partner Gayle.

The West Indian power-hitter found his touch at the right juncture while South African de Villiers has been equally successful in destroying the opposition bowlers' economy rates.

Considered the team's weak link, the bowling department has slowly started to improve with the spin-pace duo of Yuzvendra Chahal and Shane Watson taking 16 wickets each so far. England's Chris Jordan showed glimpses of his impressive best in the last outing.

Despite a poor start, RCB have pulled off four wins in the last five matches to be on the verge of a play-off spot and one more win should give them a passage from the league stage.

On the other hand, coming back from a last ball thrilling win over Sunrisers Hyderabad, Delhi will depend heavily on their skipper Zaheer and senior leg-spinner Mishra to counter RCB's batting prowess.

The team's success will also depend on all-rounders Chris Morris and Carlos Brathwaite to not only restrict RCB's fireworks but also wield the willow at the Shaheed Veer Narayan Singh International Cricket Stadium.

After leading the team to a six-wicket win on Friday, Delhi's hopes on the batting front will be on Karun Nair, alongwith the likes of in-form South African stumper Quinton de Kock, Rishabh Pant and Sanju Samson.

Check out LIVE cricket score of the first Test match between West Indies and South Africa at St Lucia.