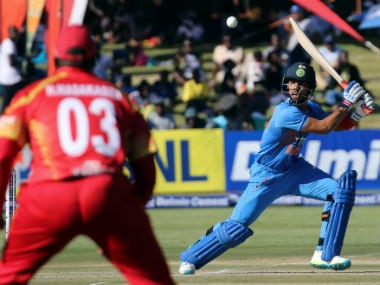 PREVIEW: With Zimbabwe pulling off a huge upset in the opener, India will look to bounce back and draw level in the three-match Twenty20 International (T20I) series when they lock horns again on Monday.

After clinching the One-Day International series 3-0, it was expected to be a cakewalk for the Indians in the T20Is as well.

But the hosts did well with both the bat and ball and the young Indian side was tested for the first time on the tour on Saturday.

Batting first, Zimbabwe posted a challenging 170/6 in their 20 overs. India kept on losing wickets at key moments, but somehow were able to cope with the required run-rate.

However, with the Indians needing seven runs in the final over, skipper Mahendra Singh Dhoni failed to get his team over the line. Manish Pandey bats during the first T20I between India and Zimbabwe at Harare. Reuters

Manish Pandey top scored with a 35-ball 48 but ideally he should have carried on.

Another turning point for India was Axar Patel getting out to a loose shot in the last over.

The bowlers too failed to put up a good show. Only Jasprit Bumrah could shine with the white leather, picking up figures of 2/24 from his four overs. The other frontline seamers, Jaydev Unadkat and Rishi Dhawan, were both clobbered for over 10 runs an over.

It remains to be seen if Dhawan and Unadkat get another game during this series. Dhoni might just fall back upon the more reliable duo of Barinder Sran and Dhawal Kulkarni who were brilliant in the ODIs.

Leg-spinner Yuzvendra Chahal, who lacked his usual menace, also needs to pull his socks up and deliver a better performance.

For Zimbabwe, Elton Chigumbura stole the show with the bat with a 26-ball 54. There were contributions from the top order too.

They are likely to go in with an unchanged side. captain Graeme Cremer would want his bowlers - the likes of Neville Madziva and Donald Tiripano - to come good again.

The win in the first T20I in Harare has given Zimbabwe something to cling onto. And they are unlikely to leave any stone unturned to try and seal it on Monday here.

But then again it is a wounded Indian side which has its pride at stake and revenge will be the first thing on their mind.