India vs New Zealand: Suresh Raina to miss Mohali ODI after failing to recover from fever

Mohali: Suresh Raina is still not available for selection for India's third ODI against New Zealand as "he has not yet fully recovered from viral fever" but Rohit Sharma spent a considerable time at the nets in an indication that he could be a part of the playing XI on Sunday.

Rohit, who was in discomfort after getting out for 15 in the last game in Delhi, spent a long time in the nets as the Indian team underwent a routine net session ahead of the game on Sunday. 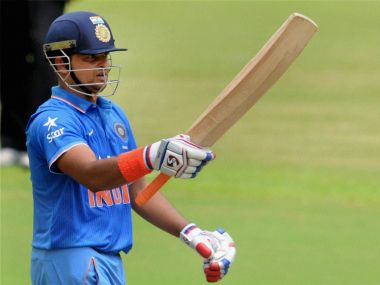 All-rounder Hardik Pandya, who almost got his side over the line on Thursday in the second one-dayer, was not a part of the optional training session on Saturday.

Batting mainstay Virat Kohli and Ajinkya Rahane had a long net session, in which they mostly faced throwdowns.

Skipper Mahendra Singh Dhoni, who failed to finish the game in Delhi too had an extensive session, playing both pace and spin.

Vetaran curator Daljit Singh has promised a batting surface for Sunday. The pitch, which has been used once earlier in the season, sported a tinge of green less than 24 hours before the game.

Raina, who was ruled out of the first ODI at Dharamsala but trained in the nets for the second game in Delhi before being deemed unfit for that match as well, is set to miss the third ODI also.

"Raina is not a part of the squad for the Mohali match. It is a 14-member squad. He has not yet fully recovered from fever," the team sources told PTI on the eve of the crucial game on Sunday with the series tied at 1-1.

It remains to be seen whether he keeps his place in the squad post the third ODI, after which the selectors will announce the team for the remaining two matches.

Kedar Jadhav, batting at six, has done a decent job, not just with the willow but also with the ball in the series so far.

Raina was brought back into the ODI side after a gap of one year. He played his last match in October 2015, after which he was dropped for the ODIs in Australia and the limited-overs tour of Zimbabwe earlier this year besides the two-match T20 series against the West Indies in USA.