India vs England: Hardik Pandya doubtful for ODIs after getting ruled out for 6 weeks with injury

Mohali: India all-rounder Hardik Pandya has been ruled out of competitive cricket for a minimum of six weeks after the shoulder injury he sustained during the net-session in Mohali turned out to be a hairline fracture. 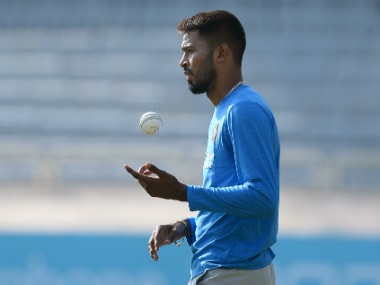 The rehabilitation will start post recovery and it makes Hardik a doubtful starter for India's ODI series against England starting in Pune on 15 January.

"BCCI medical team confirms that India all-rounder Hardik Pandya has sustained a hairline fracture on his right shoulder. He will take minimum six weeks to recover from this injury," a BCCI release stated.

"BCCI medical team will monitor his progress and rehabilitation programme and update accordingly. Hardik was struck by a ball during a net session before the start of the third Test match against England in Mohali," the release added.

Opener KL Rahul and wicket-keeper Wriddhiman Saha are already in the injured list.