Chennai: Statistical highlights on the final day of the fifth cricket Test between India and England on Tuesday. 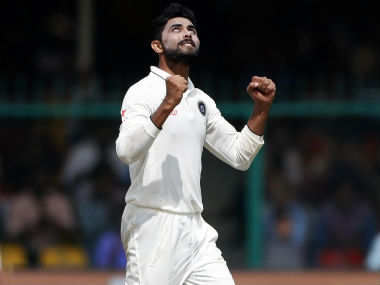 - India have established a record for contesting most Tests (18) in a row between August 2015 and December 2016 without a defeat. Their previous highest tally of most successive Tests without defeat was 17 between September 1985 and March 1987.

- India's superb triumph by an innings & 75 runs is their biggest vs England, obliterating their win by an innings and 46 runs at Leeds in 2002. In all, they have won six Tests by an innings margin against England in Tests.

- Ravindra Jadeja has captured Alastair Cook's wicket for the sixth time in the just concluded rubber - the most occasions a bowler has claimed his wicket in a Test series.

- Jadeja's above tally includes Cook's wicket in four consecutive innings at Mumbai as well as Chennai. Overall, Jadeja has taken his wicket seven times in ten Tests - the first occasion being in the first innings of the Southampton Test in 2014.

- Jadeja (7/48) has registered his best ever bowling performance in Tests, eclipsing the 6 for 138 vs South Africa at Durban in December 2013. His sixth instance of five wickets or more in an innings in Tests is his first vs England.

- Jadeja's outstanding bowling figures of 10 for 154 are his first instance of ten wickets in a Test match, outstripping the 8 for 76 vs South Africa at Mohali in November 2015.

- Jadeja is the fourth Indian all-rounder after Kapil Dev (thrice - once each vs Australia, Pakistan and England), Vinoo Mankad and Ravichandran Ashwin to manage 200 runs or more and bag 20 wickets or more in the same Test series.

- Jadeja has become the first all-rounder to post a fifty, capture ten wickets or more and take four catches as well in a Test match.

- R Ashwin (306 runs and 28 wickets) and Jadeja have provided the first instance in Test annals of two all-rounders achieving the double of 200 runs and 25 wickets in the same Test series.

- Virat Kohli has received his first Player of the Series award in Tests for totalling 655 runs at an average of 109.16, including two hundreds. He is the only batsman to amass 500 runs or more in the series.

- Kohli has led India in 18 successive Tests without losing a single one, emulating Sunil Gavaskar's feat of 18 Tests with a defeat between January 1976 and January 1980.

- Keaton Jennings (54) has posted his second highest Test score next only to the 112 in the fourth Test at Mumbai. In his first Test series, he is averaging 41.75 - his tally being 167 in four innings.

- Cook and Jennings have shared a partnership of 103 -England's fifth century stand for the first wicket vs India in Tests at Chepauk, Chennai. Their highest remains the 178 between Graeme Fowler and Tim Robinson in January 1985.

- England's first innings' total of 477 is the biggest first innings score, resulting in an innings defeat, outstripping the 432 by England vs Australia at The Oval in 2001. England had lost by an innings and 25 runs.

- England, with their defeats at Mumbai and Chennai Tests, have earned a dubious distinction of recording successive defeats by an innings margin despite scoring 400 or more runs in both the Tests - the first team to do so.