Catch all the Live scores and updates from Day 2 of the 3rd Test between India and England at Mohali.

FIFTY! Ashwin drives through covers to bring up the miletstone. It's his 9th half century. A magnificent innings, one which might decide the fate of the match. His consistency with the bat at crucial junctures has helped India throughout the year and he continues his brilliant batting.

Jadeja punches Woakes on the backfoot to covers for a boundary which brings up the fifty-run partnership between him and Ashwin.

England have opted for the second new ball straightaway. Woakes to start off with it.

Gareth Batty, who has been heavily underbowled, comes back into the attack. He has only bowled 3 overs so far. Jadeja finally breaks free and lofts Rashid over mid-on. MASSIVE! Jadeja slams the leggie over the bowler's head for a six. Kohli stands and applauds the southpaw from the dressing room. Jeez, Jadeja almost hits the next ball straight to Rashid, but it falls just short. Ashwin guides Batty's delivery to third man for a boundary. The new ball is available now and reviews have been reset. India's trail has come down to 33 runs.

The ball has gone out of shape and has been replaced in the 68th over.

OUT! Big wicket. Kohli falls for 62, he nicks it to Bairstow off Stokes. The all rounder celebrates in a cheeky way, by keeping his palm on his mouth (remember he was reprimanded on Day 1). Nonetheless, a massive breakthrough. Hosts are in a spot of bother.  Kohli c Bairstow b Stokes 62(127)

OUT! And its a collapse for the Indians after tea, with Karun Nair getting run-out at the non-striker's end thanks to a brilliant collect-and-throw by Jos Buttler at backward point. What an unfortunate manner for his Test career to start off, especially after he got off the mark with a luscious cover drive.

OUT! And Rahane continues to disappoint with the bat, getting trapped lbw by a well-planned googly from Rashid that traps him plumb lbw. Even though Marais Erasmus hardly takes time in raising his finger! Rahane desperately tries to review it, but it was too plumb for third umpire Dharmasena to save him. Flurry of wickets after tea for India.

OUT! Rashid strikes second ball after tea. Pujara looks to go over mid-wicket off Rashid, but Woakes catches it. The decision goes upstairs, but the soft decision was out. But replays clearly show that it was a clean catch. Pujara falls. Pujara c Woakes b Adil Rashid 51(104)

FIFTY! Pujara brings up the milestone with a single. His good run in the series continues. It's his 11th Test half-century.

Pujara and Kohli bring up their 50-run partnership off 121 balls in the 47th over with a single.

Kohli takes a single in the 40th over to bring up the team 100. Both Kohli and Pujara have ensured that India recovers well after losing the openers.

OUT! England review for lbw. The original decision is not out, and there is no bat involved. Oh wait, three reds and Dharmasena declares Parthiv out. Brilliant use of DRS this by Cook and co.  Parthiv Patel lbw b Adil Rashid 42(85)

Parthiv and Pujara are back after lunch. Woakes to start the proceedings for England.

Parthiv Patel has grown in confidence. The southpaw leans forward and drives Anderson to mid-on and follows it up with another hit which was straight down the ground in the 18th over. Stokes bowls a maiden from the other end.

OUT! England appeal for a caught behind off Stokes, umpire Gaffaney says no, but Vijay Walks off. He is livid as he walks back to the pavilion. Vijay c Bairstow b Stokes 12(38)

Parthiv survives! England appeal for a caught behind appeal, and after some thought Erasmus declares him out. The southpaw reviews it immediately, third umpire Kumar Dharmasena says, "There's day-light in between bat and ball." However, he first asks the on-field umpire to stay with his orignal decision and rectifies it instantly. Blunder prevented! England resort to spin in the 8th over. Parthiv greets Moeen with a four to mid-off. Rashid introduced from the other end. And time for a drink.

Murali Vijay and Parthiv Patel have arrived at the crease for India's reply. Anderson takes the new ball

A brilliant start to the Day for India. England would feel they missed out on the big score after winning the toss. Jonny Bairstow was the only batsman who looked at home and was fluent throughout his innings. However, the second new ball helped the hosts massively as Bairstow, Woakes, Rashid and Batty fell within 13 overs after taking. It hardly took the hosts 14 minutes to bundle out the visitors. Cook and co would rue the fact that they got out to poor shot selection, something they would want to improve in the second innings. But for now, the attention shifts to the Indian openers. How will Parthiv Patel fare on his comeback?

OUT! Shami strikes, Batty reviews immediately. But the decision stays. England are all out for 283. Gareth Batty lbw b Shami 1(13)

OUT! Rashid nicks to Parthiv off Shami. He falls for 4. An ideal start for the hosts and Shami as he strikes on his first ball of the Day. Rashid c Parthiv Patel b Shami 4(25)

The players are on the field for Day 2. Jadeja to start the proceedings.

That's it from me today. Do join us tomorrow for Day 3 of the third Test.

Our cricket expert Ayaz Memon reviews the Day 2 of the third Test.

Adil Rashid: "We bowled exceptionally well to restrict them below 270. It was a good effort with the ball and in the field. It was a very important final session.(If) You stick to your plans long enough, you get wickets. The pitch seems good enough. I feel okay but at times you don't feel as good; that is when you have to dig deep. It was nice to have that variation on a good spot against Rahane. We have still got four wickets to get. (When asked about batting) Not looking that far ahead."

If India can see off the new ball tomorrow morning and get a substantial lead, that could just be the series. Such a good test so far.

Stumps, Day 2: After 84 overs,India 271/6 ( Ravichandran Ashwin 57 , Ravindra Jadeja 31) The session started brilliantly for England as they took wicket after wicket. But, how often has this been the scenario? From a spot of bother Ashwin has bailed out India from a tough position yet another time. Despite struggling earlier in the session while rotating the strike, Ashwin along with Jadeja, who played the second fiddle, has took India to a secured position. India are only 12 runs behind with four wickets in hand.

In this form, Ashwin passes the true test for an all-rounder: he can be picked either for batting or bowling.

FIFTY! Ashwin drives through covers to bring up the miletstone. It's his 9th half century. A magnificent innings, one which might decide the fate of the match. His consistency with the bat at crucial junctures has helped India throughout the year and he continues his brilliant batting. 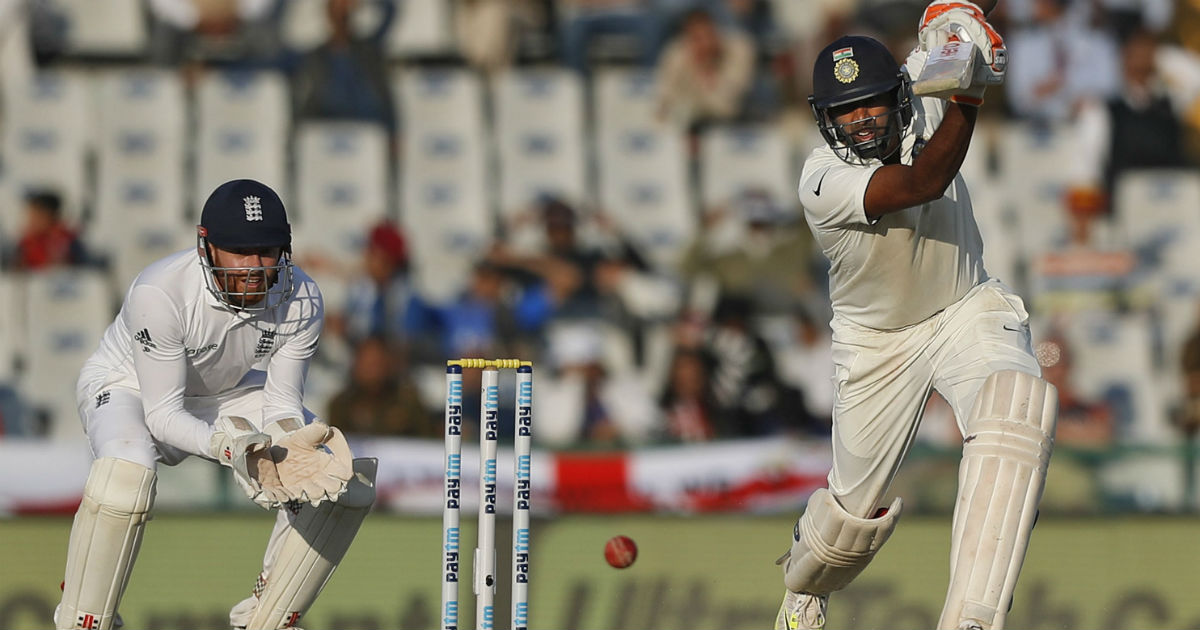 Report, Day 1: Wicketkeeper-batsman Jonny Bairstow (89) saved England's blushes as the visitors reached 268/8 at stumps on the opening day of the third Test against India at the Punjab Cricket Association (PCA) I.S. Bindra Stadium here on Saturday.

At stumps, tailenders Adil Rashid (4) and Gareth Batty (0) were at the crease. Day 1 mostly belonged to the Indian bowlers, who stuck to a tight line and length.

Bairstow fell 11 short of what could have been his fourth Test century when off-spinner Jayant Yadav trapped him in front just before the day's play ended. His 177-ball knock included six boundaries.

Despite losing his partners at the other end, Bairstow played the sheet anchor's role well to bring up his half-century in 76 balls.

Coming together at the fall of Moeen Ali (16), Bairstow forged a 57-run stand with Ben Stokes (29) before being separated by left-arm spinner Ravindra Jadeja after the lunch break.

Stokes, who went in for an ambitious drive was cleverly foxed by Jadeja leaving the rest to stumper Parthiv Patel, who lost no time in stumping the English all-rounder.

The fall of Stokes brought in part-time stumper Jos Butler, who was recalled to the England side in place of a struggling Ben Duckett.

Buttler and Bairstow then added 69 runs to help restore some measure of respectability to the England scoreboard.

Just when the partnership looked threatening, Jadeja once again struck after the tea break to dismiss Buttler, who looked set to reach his half ton.

Buttler, who consumed 80 balls, went in for a flashy drive off Jadeja, only to find India skipper Virat Kohli's safe hands at mid-off. His knock included five hits to the fence.

Bairstow then survived a futile review from India to forge another crucial stand of 45 runs for the seventh wicket with Chris Woakes (25) before Jayant found him plump in front from around the wicket.

Woakes then departed in the penultimate over of the day to leave England reeling at 266/8.

The day mostly belonged to the Indian bowlers, who stuck to a tight line and length as England lost the plot right in the first session of play.

Earlier, inspired by a disciplined bowling effort, India reduced England to 92/4 by lunch.

Electing to bat after winning the toss, England lost opener Haseeb Hameed (9) before skipper Alastair Cook (27) and Joe Root (15) took them past the 50-run mark.

But the hosts quickly turned it around with three quick wickets of Cook, Root and Moeen Ali (16) just before the lunch break to put the visitors on the backfoot.

Teenaged opener Hameed, who survived 31 balls, was the first casualty for the English side when a short of a good length delivery from pacer Umesh Yadav hit his gloves to give an easy catch to Ajinkya Rahane at gully.

Root then joined Cook in the middle but failed to impress before succumbing leg before to off-spinner Jayant Yadav as the visitors were reduced to 51/2.

Cook, meanwhile failed to capitalise on the two dropped chances -- dropped on 4 by Ravindra Jadeja and then on 23 by Ravichandran Ashwin -- both off pacer Mohammed Shami.

His 42-ball vigil at the crease was cut short by a short and wide delivery from Ashwin, which resulted in a thin edge for stumper Parthiv Patel. Cook batted fluently for his 27, which was laced with six hits to the fence.

Tottering at 51/3, Kohli immediately brought back Shami into the attack and the Bengal pacer responded beautifully by packing off left-hander Ali.

Back for his second spell, Shami induced Ali with a short delivery, which resulted in a top edge only to be caught at fine leg by Murali Vijay.

Ali looked confident in the middle hitting Jayant Yadav for a consecutive four and a six during his 45-ball stay. Thereafter, Bairstow and Stokes survived a few anxious moments to take England to 92/4 when the umpires signalled for the lunch break.