India, who looked nearly invincible on the home pitches, were cornered in the first Test and were forced to play for the draw.

That's it from us today. Do join us for the second day of the 2nd Test match. Till then, goodbye!

Cheteshwar Pujara: Me and Virat had a chat that we had to build a partnership till drinks after the early loss of wickets, which then extended till lunch. We knew how much pace and bounce the wicket had, and aimed to bat till lunch. There was a bit of difficulty in the first session (in terms of running between the wickets) following which we decided we would be more clear with our communication. There was a bit of misunderstanding with Kohli. The Day 1 wicket wasn't of much help for the spinners, so we wanted to dominate them. Whatever loose balls we got would be dispatched to the boundary. I would definitely want another double-hundred.

Stumps, day 1: Just at the fag end of day's play, India lost the crucial wicket of Rahane. Ravichandran Ashwin played out the last over from Broad who was bowling with the new ball. Regardless of that, the session and the day has belonged to India. Virat Kohli led from the front and his overnight score is 151. England took two early wickets to give them an ideal start, but the partnership between Pujara and Kohli took the advantage away from the visitors.

OUT! Anderson strikes with the new ball straighaway. Ajinkya Rahane c Bairstow b Anderson 23(61)  Poor shot from the Indian vice captain, pokes a ball which was going away from him. He will be very upset with him.

England take the new ball in the 89th over. James Anderson will start off with the second new ball.

Our cricket expert Ayaz Memon discusses the day's play in our Firstpost Gameplan.

150! Kohli brings up his one fifty with a single through covers. 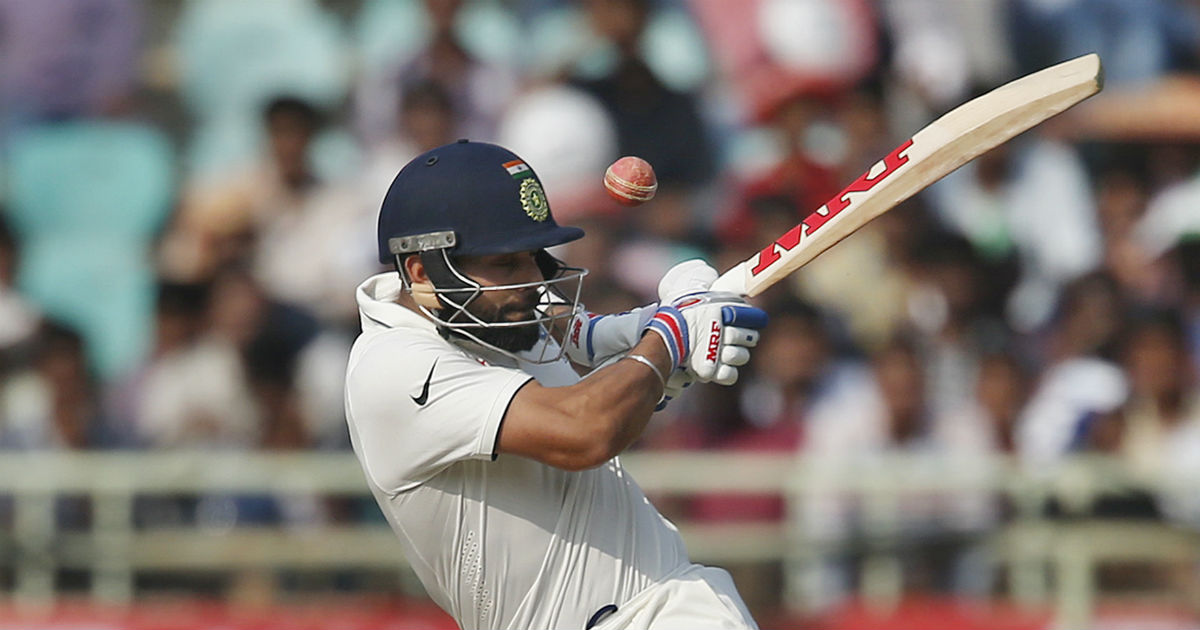 Cook's plan of persisting with spin doesn't seem to work. Both Kohli and Rahane are rotating the strike without any risks and look at home. India cross the 300-run mark in the 84th over. Missed chance? Not quite. Ansari bowls it on leg stumps from round the wicket, Kohli goes for the flick, miscues and the ball lands just short of both the bowler and Cook at silly mid off. Yikes, Rahane goes for a pull, didn't commit fully and the ball beats the mid wicket fielder and the batsmen run 3. We are past the regulation closing time, but England still have to bowl another 4 overs and have 30 minutes to do so.

Stokes tries the slower one, Kohli waits for it and cuts it through cover point for a boundary. Ansari comes back into the attack in the 79th over. Just a single off his 9th over. A loud appeal at the cusp of 80th over. The umpire says not out and England review. It pitched outside off, the impact was also in line but Kohli survives due to umpire's call. Needs to practice the reverse sweep a bit more, maybe? New ball is available, but the visitors haven't opted for it yet.

India have gained the momentum again. Kohli still looks a tad aggressive. He thumped one through point for four off Rashid and then flicked one behind square leg for four off Stokes. He's kept the scoreboard ticking. Stokes was brought back and he had a loud shout for an LBW turned down against Rahane. Rahane looked to turn it to the leg side but missed and it looked like height was a problem. Rahane then got into the act as he guided one through the slips region for four. He then rocks back and cuts one through point for four off Moeen. Moeen has been on the shorter side so far and deservedly punished. 24 runs off the last 5 overs.

Preview: India will look to apply themselves better when the hosts will take on a confident England in the second Test match at the ACA-VDCA cricket stadium here on Thursday.

India who looked nearly invincible on the home pitches with the ingenuity of spinner Ravichandran Ashwin, accuracy of Ravindra Jadeja and experience of leg-spinner Amit Mishra, were cornered and were forced to play for the draw in the opening Test. India's batting line-up failed to rise to the challenge when they needed 310 at a run-rate of just over five on a fifth-day track.

While Murali Vijay and Cheteshwar Pujara came up with a century each in the first innings, Gautam Gambhir and Ajinkya Rahane failed to respond.

But the Virat Kohli-led side can take good things from this as, despite losing early wickets, he along with lower-order batsmen Ashwin, stumper Wriddhiman Saha and Jadeja took India out of the woods and managed a draw.

The latest addition of in-form opener Lokesh Rahul, who was sidelined from the first Test squad due to an injury, will also give a big boost to the team confidence as Gambhir, who replaced an injured Shikhar Dhawan in the New Zealand series, failed to gave the hosts the start they wanted in both the innings against England.

Commenting on the choice of openers, captain Kohli hinted that Rahul might play in place of Gambhir. "We are pretty clear in our mind that KL (Lokesh Rahul) is our number one choice along with Murali Vijay. and when he is fit at any stage he will come back in the team and we will start with him," Kohli said at the pre-match media conference.

"We are waiting for him to get fit as soon as possible and in the meantime Gautam got the chances and he played really well in the different situations and that's how team combinations go."

"I cannot give any pointers about what we are going to do, all possibilities... You might see a few surprises in the team."

The bowling department, which has been firmly put in its place by Kohli against New Zealand, also looked a bit lost against England as it failed to put the pressure on the English opening duo of Alastair Cook and Haseeb Hameed.

Mohammad Shami's fitness once again came into the limelight after he suffered a hamstring cramp in the first innings and as a result England posted a mammoth 537.

Along with Shami, who bowled in the second innings, Umesh Yadav, Mishra and Ashwin have to bowl the disciplined line and take wickets in order to come back strongly in the next match.

Hence, after a nervous draw at the sporting wicket in Rajkot, the hosts will now be hoping to keep things simple and repeat what they have been doing over the last two home series.

On the other hand, England, who came to India after the lacklustre performance against minnows Bangladesh, somehow managed to put things together against Anil Kumble-coached side.

Promising opener Hameed as well as Joe Root along with skipper Cook and Moeen Ali have impressed the critics who had predicted them to be tormented by the Indian spin attack.

In terms of batting, England seemed much more stable than the hosts as their four players -- Cook, Joe Root, Moeen Ali and Ben Stokes -- slammed centuries as compared to India's two.

The bowling department, which created problems for Indian batsmen throughout the match also filled the team with confidence after the inclusion of star pacer James Anderson. He had missed the first Test due to injury.

Going into the match, the visitors hold psychological advantage against the hosts but they have few loopholes to work on to take a crucial lead in the five-Test series.